HomeCultureMilitaryThe Shot: The Harrowing Journey of a Marine in the War on Terror 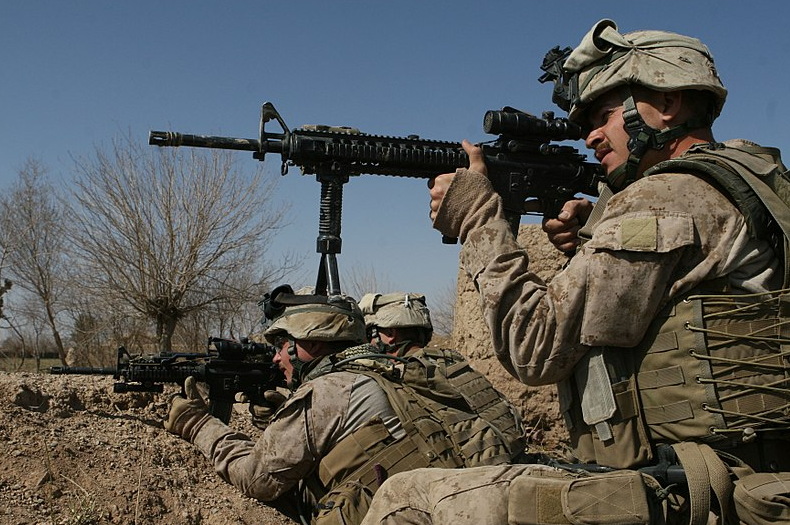 The following is an excerpt from USMC veteran author Bill Bee’s book The Shot: The Harrowing Journey of a Marine in the War on Terror.

The brain fog meant there were days where I couldn’t tell up from down, and I felt like an idiot.

Hiding the rollercoaster of emotions and anger, so I wouldn’t lash out at friends or family, made my recovery worse.

The thoughts carried on all day, every day, and it gradually wore me down to the point where I turned to drinking again to self-medicate, and my wife Bobbie reached her breaking point. She tried to get me help, but every time she tried to tell my Marine command I was having problems, they warned her that complaining could jeopardize my career.

It was September 2010, nine years since that day in New York that sparked the War on Terror, and accelerated my journey to Afghanistan to destroy the terrorists responsible. My fight against the Taliban had fueled my desire to go into every gunfight without fear and to make sure I wiped the insurgents out of Garmsir and Marjah.

Marines were still fighting and dying in Helmand Province, despite promises from the Pentagon brass it would soon be over, while I was at home battling a brain condition I still didn’t understand. I knew I had multiple traumatic brain injuries, but that was it.

I still hadn’t gone through a full neuropsychological examination to find out the finer details of what was wrong with me, and my frustration grew every day. I still hadn’t fully come to terms with the fact I wouldn’t be able to serve overseas again, and the anger and dejection made me more alienated than ever.

My depression, and constant need to get drunk to try and escape my dark reality, weighed down on my marriage.

The Marines I hung out with were dealing with similar issues, and we found ourselves racking up enormous bar tabs during insane benders, and breaking down with each other to talk about what was going on.

For my thirtieth birthday, we rented a party bus fully stocked with alcohol—with a stripper pole in the middle—for a group of these friends to go from Jacksonville to Wilmington, North Carolina.

On our way home, the driver pulled over and threatened to call the cops, because one of the guys was screaming at his wife, another was sobbing and talking about all the friends that had been killed overseas, and the rest of us were causing chaos. Bobbie assured the driver that this is what all of them had to go through every day, and she managed to regain control by telling everyone on board to sit down and put their hands on their laps.

It helped having people around me, but there were points where Bobbie ran out of patience and was sick of my behavior. She finally had me back after months away and had endured multiple phone calls where she thought I wouldn’t be coming home, but instead of having a happy father and husband, she had an absent Marine. I wish I could remember what we were arguing about when she one day gave me an ultimatum.

“If you want to be miserable all the time, then you can be miserable by yourself. I am taking Ethan out for a doctor’s appointment, and when we come back we are going to leave and stay with my parents in Pennsylvania.”

She left, and I didn’t think she would come back. The thoughts of Shanfield and Walters and that IED blast circled around my head again, and that’s when I thought to myself: You know what—fuck it all. I’d witnessed Marines die from alcohol poisoning on base, and figured it would be the best way to die. I raided our liquor cabinet and found two one-liter bottles of Milagro tequila. I wrote her a letter saying sorry, sent text messages to my friends that my wife had left me, and just started drinking as fast as I could.

Within minutes of the first shot I was already throwing up, but I just kept going. It didn’t matter by that point. My mind was made up and I was going to finish the job. I’d had enough. Between sips, I thought about the two Marines whose deaths I felt responsible for, the IED blast in Marjah a few months earlier that ended my combat career, and my decision to take my squad into a compound rigged with explosives.

This was the only option to stop the pain and the brain injuries making my life a living hell. Bobbie was an hour away with Ethan and had no idea why her phone kept ringing.

Like the day in 2008 with the sniper shot and the explosion just a few months before, I plunged into darkness. Was that it? Had I finished the job? Would I stop feeling pain? I suddenly woke up and realized I was sitting upright, and someone had strapped my head to the fridge with duct tape.

I was panicking. I had no idea what was happening and no clue who had tied me down. I tried to look around but couldn’t move. Bobbie had come home and found me passed out outside the bathroom floor and couldn’t wake me, so she had called my best friend Dustin Bohde, next door. He was a corpsman with the 2nd battalion, 10th Marines, so he always had medical equipment on him, knowing he could be called to deal with a situation at any time.

He somehow got me to vomit so he could get all of the tequila out of my system, and then stuck an IV line into each arm.

By the time I woke up, the bags had almost run out of saline solution. Dustin saw my eyes had opened and kept telling me I was a dumbass, but I could see in his face that he was happy he got there in time to save me. He saved my life. If it hadn’t been for him, I wouldn’t be here. Dustin understood my actions, but it was his duty to save me.