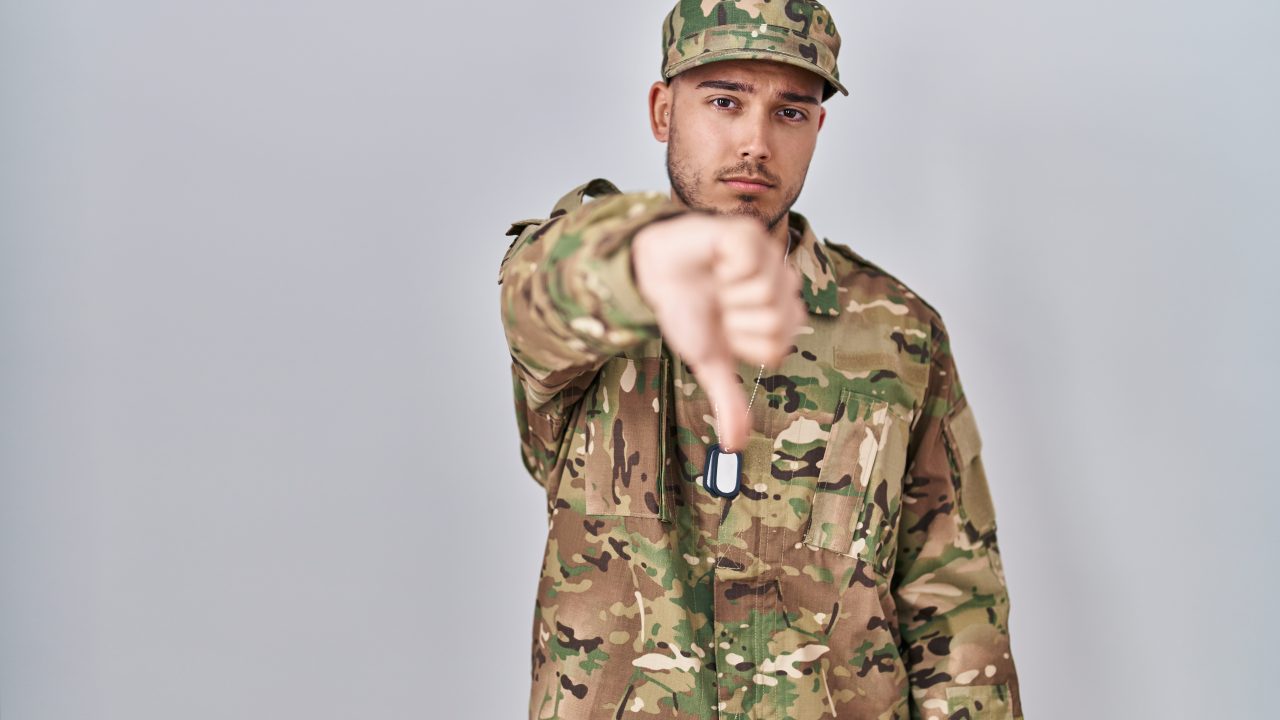 “Oh, why did you decide to retire?” the young dental technician asked, noticing my pending retirement date on my dental records as she prepped for my final exam. It occurred to me that other than an obligatory form letter from my branch manager, no one has asked me that question. I’ve volunteered that information to my family and friends of course, but this was the first time someone I didn’t know asked me face-to-face why I was getting out now when I don’t have to.

“Afghanistan,” I replied immediately. She seemed like she didn’t know what to say to that. I explained that the way Afghanistan ended wasn’t the only reason I’m tapping out a little early (in as much as 25+ years can be “early”), but it was the final straw. I couldn’t see myself continuing to put myself and my family at physical, emotional, and financial risk and watch my fellow Soldiers die in order to satisfy someone else’s political agenda and personal profit. I know that sounds naïve given the inherently-political nature of the military profession, but that’s how I feel. So shortly after watching the Afghan Army fall apart and people literally falling to their deaths while desperately clinging to the outside of departing planes, I dropped my paperwork. Leaving immediately would negatively impact the unit, so I agreed to stay on for another year or so while my replacement got on the ground and up to speed.

The reason I shared the above vignette is that it directly relates to the current discussion about the Army’s recruiting woes. In case you’re not keeping track, the Army is quickly approaching the end of the fiscal year (30 September), and they (we) have only met around half of our recruiting needs for this year.

And it’s mainly necessary because the Army can’t get enough new people in the door.

This is a complex problem and there are many contributing causes. For one thing, the economy is getting better. There are more jobs for fewer people; supply and demand. Others say that because there are no wars to fight right now, fewer warfighters want to sign up. And of course, only a small part of the American population is healthy, sane, smart, or non-criminal enough to even join in the first place. Therefore, recruiters are having to compete harder with a smaller potential population. But there are other reasons, ones people don’t seem to want to talk about.

Few people seem to want to talk openly about what I opine is the true root cause of all of this: bad political policies. These policies include, but are not limited to, 1) woke policies running rampant throughout the military 2) the disastrous end to the war in Afghanistan 3) the constant attacks on conservatives, whites, and men (three separate categories, but “conservative white men” are the largest demographic in the Army) 4) the weakening of the U.S. position abroad and the inherent increasing possibility of conflict that brings 5) shitcanning thousands of troops over a COVID vaccine that we all know doesn’t work in the way we were told it would. What follows is a short explanation and analysis of these opinions and some suggestions on how to mitigate them. But first, some background.

The Army is more and more a family affair, with those in the Army encouraging others to join. How significant is this phenomenon? According to one source, it’s 79%. 79% of recruits had a family member who was in the service, and who directly or indirectly influenced their decision to join.

And now, fewer of those family members are encouraging the younger generation to follow suit.

Many others have similar feelings to the ones I’m about to express, but I’ll use myself as an example. I have a daughter in military school right now, who is super-excited to follow in the footsteps of her father, her mother, both grandfathers, at least two great-grandfathers, and several uncles and cousins who served in the Army, AKA “The family business.” I’m proud of her for it. But if she were 8 right now instead of 18, I would not be nudging her toward military service. In fact, I am actively discouraging my younger daughter from joining. The Army of today is not the Army I joined more than 2 decades years ago. The Army has been good to me and I’m grateful. But I no longer want to serve in today’s Army, and I don’t think it’s a good fit for my own children at this time.

The main cause of the sudden drop in retention is that people like me are seeing what’s happening and are voluntarily leaving. Some may say “good riddance.” But is it really necessary to jeopardize national security by advancing policies that do little good for the nation as a whole? Was the debacle in Afghanistan good for America? Was inflicting the deeply-racist “anti-racist” policies and woke agenda upon the military a long-term overall good? Is making the entire service take a COVID vaccine that is both highly controversial and highly ineffective really worth the increasing holes in the formation?

…because I don’t think it is.

We have experienced good economies before. Large segments of America’s youth have been unfit for service for generations. We’ve had periods of relative peace. The difference now, and the main reason recruiting is so down right now, in my opinion, is because Democrat policies are driving people who would influence the next generation to join the military, to not do so anymore.

Many people I’ve spoken to can no longer tell young people in good faith that the military is a noble profession and a true meritocracy, where you can “Be All That You Can Be.” And even if they do tell young people that, young people have eyes and ears and brains and are coming to their own conclusions. Many feel that the Army will use you and toss you aside, like so many Kurdish Peshmerga fighters or Afghan police officers. That you or your career could be sacrificed at the altar of woke politics, or that America’s perceived weakness will invite attack against ourselves or our allies. That our Commander in Chief is a feckless dotard, and see with their own eyes the ways in which identity politics trumps all. For these and many other reasons, influencers are telling people not to do it.

Throw as much money as you want at the problem. Scrape the bottom of the barrel as hard as you want. Issue moral waivers (nothing could go wrong with that, right?) Let a whole bunch of folks in who never even made it through high school. Blame Putin, or “no wars,” or the economy as you like. Kick tens of thousands of people out for not wanting the ineffective COVID vaccine, or won’t join because it’s mandatory. But the military is a values-based profession, and the nation and the Army drift away from the values that most of its warfighters value, you’re going to continue to have situations like this.

In fact, the Army’s recruiting/retention situation is worse than many people realize. As one indicator of how bad things are, the Army sent out messages to a wide group of individuals who are retiring or separating before the end of the fiscal year (FY) and offering to let them extend 90 days (i.e. through the end of the fiscal year) or more so the numbers on the books look better for the end of this FY. I know this because I’m one of the soon-to-be-retired folks who received that message. This is a huge expansion of the Army’s regular “SELCON” (selective continuation) policy which allows highly skilled individuals to stay in past their mandatory retirement date. I suppose I should be grateful that I got asked to extend this time; many years ago when I tried to leave the service the Army needed people with my skillset so they just “stop-lossed” all of us.

That’s on top of the Army loosening up rules on things like tattoos (which I’m actually fine with), and trying to take in oodles of non-high school grads (which I’m not OK with). The latter part got quickly rescinded, but the indicator is still out there. The Army doesn’t do things like that in a healthy recruiting environment.

While I squarely blame partisan political policies for the current state of Army recruiting, there are plenty of other causes. I’m sure there will be plenty of counterpoints in the comments section. But if that is the case, I hope those people will offer some solutions as well. I only have one:

Regain the trust of the Veteran Community. That’s it. It’s a tall order, but that’s literally all you have to do to fix the military’s recruiting woes, both now and in the future. Our Army is based on trust, and the trust in the military is going down. Badly. Not as bad as Army recruiting, but it could get there. Here’s how you avoid that and fix recruiting:

1) Hold some people accountable for Afghanistan. We were lied to about so many things for so long. There needs to be a formal investigation.

2) End the “woke” policies that are infecting and affecting our military. Making the Army (and the country) more racist toward one group of people isn’t going to make them less racist against another. Contrary to “Anti-racism,” the solution to current discrimination is not future discrimination. That only ensures discrimination endures in perpetuity. Instead, return to merit and stop the quota system masquerading as “goals” or “targets.” Get rid of toxic leaders, regardless of whom their parents are or what their demographic is. “Favor this group of people, over that group of people,” because, you know, that’s actually kind of racist.

3) Stop the vaccine madness. Like a good Soldier, I got the vaccine. And like so many others, I got COVID anyway. Maybe instead of offering waivers for high school diplomas, you should offer waivers for the controversial and ineffective COVID-19 vaccine. You know, don’t waive the thing people actually should have in order to serve effectively in the military, and do waive the thing they don’t need, that doesn’t work, and is causing literally tens of thousands of people to not join or not stay in. It’s time to admit defeat on COVID. You know, like we did in Afghanistan.

The difference is, this time there won’t be people desperately clinging to airplane wheels over this decision.

Scott Faith is a veteran of a half-dozen combat deployments and has served in several different Special Operations units over the course of his Army career. Scott’s writing focuses largely on veterans’ issues, but he is also a big proponent of Constitutional rights and has a deep interest in politics. He often allows other veterans who request anonymity to publish their work under his byline. Scott welcomes