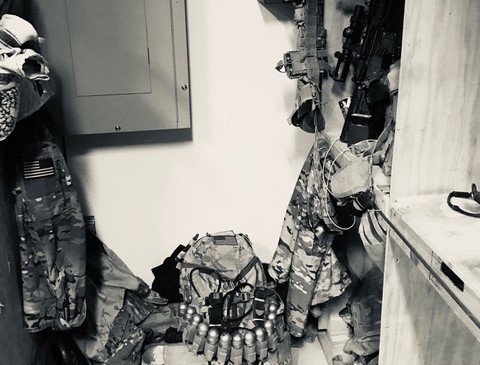 The following is part of a collection of short stories titled Insha’Allah: Short Stories of the Long War in Afghanistan.” Chris began writing this collection while deployed to Afghanistan in 2018. He wanted to share the lesser-known side of the war with friends, family, and, one day, readers.

It was the night before, and he paced around his plywood box of a room. The hastily constructed and leaning tower of dorms creaked below his sandals. The light shined through gaps in the floor and up from the bedroom under his. Leaving no place to hide, sound traveled from room to room even easier than the light. Bluegrass melodies drifted through the flooring as well. The man playing guitar beneath him was talented enough that it was often unclear whether the music was from the stereo or not, But it was welcomed either way. The air conditioner groaned as it kicked on with a spark, as it always did, from the dust-covered vent. It was an unnerving little spark by most accounts, but he had grown accustomed to the intricacies of his home away from home. For five months at a time, he called this place home; not this small matchbox specifically, but always one similar. Once again, he had a different home on a different base in a different year.

He paced around the small room as he usually did most of the nights before leaving on a mission. The pacing was not so much out of nervousness as it was anticipation. He folded his clean laundry neatly and quietly placed it away in the wardrobe that had seen more days than it should. He bundled his socks and arranged his shoes in a row under the edge of the bed. There was no longer a working vacuum in the barracks hut. He knelt to handpick pieces of lint and corners of Pedialyte powder wrappers from the thin Afghan rug beneath his feet, placing them into a grocery bag on the back of his wooden door. The rug had been purchased from an interpreter at a fair price a few months prior. It was essentially tradition for each room’s habitant to make small contributions to the space throughout their stay. Someone had built shelves along the wall, over his bed, when the room was their home. Another created a nightstand by screwing an old desktop, along with “L” brackets to the wall. Old Christmas ornaments and rosaries were left behind on tacks and hooks.

Over the soft hum of fluorescent lights and dull strumming of the guitar beneath him, he could hear an alarm, followed by the Counter Rocket and Mortar, or CRAM, system spinning off round after round in quick succession. These systems were designed to intercept rockets and mortars that were aimed to hit the small firebase and generally did a fine job. An impact followed, distantly, but close enough to feel the explosion inside himself. He was not worried. For this home, it was typical background noise. These sounds were as normal as a garbage truck rumbling down the street and squealing to a halt in a cul-de-sac. Sirens blared and echoed throughout the halls of every building and tent, but it was nothing to be alarmed about. Nothing to see here, just another day in rural Afghanistan.

He smelled the lavender candle burning a dull glow on his desk. It was a gift from a care package and, blended with the scent of the pine resin walls. The smell was quite comforting, even relaxing. He packed enough clothes for a few days into a duffle bag that was splayed open on his bed. Two shirts, two pairs of pants, two pairs of socks, underwear, and workout shorts. He thought of writing a letter to her, or his family, but never could find the words when his pen touched the paper. He tried on various occasions but ultimately decided there was no point.

He imagined her sleeping, curled sweetly beneath the blankets. Skin warm and smooth; he could all but smell her. Her mouth slightly cracked, and fiery hair spilled over neutral-colored pillowcases and sheets. He imagined the sun barely rising back home, his natural home, his real home, the home where he laid his head next to that mess of hair at night. He imagined her rolling over as the light peeked through the wooden blinds, gently waking her. He heard her soft legs rustling in the sheets. The smell of coffee poured from the kitchen in a thick flume. He never missed home, just her. Just his lover with fiery hair and soft voice. He thought of the touch of her small, soft, smooth hands, and those gray eyes. They changed from gray to blue to green depending on her outfit, her mood, or the weather. He thought of those eyes often.

He took a few moments to piss into an empty bottle. Two bottles, actually. Stopping mid-stream to reach for another. Juggling such a task was just one more abnormal normality of his home away from home. It was too far and far too cold to walk to the bathrooms on camp every time nature called. He placed the bottles near his door as if the milkman would be by to collect, but he was the milkman. He tossed in a few more items to fill space: a half-read book, a toothbrush, body wash. Every time the list was slightly different, though more or less the same. All of his favorite things would wait here for him until he was back from the operation. Then he would again unpack them as he did many times before. If he did not return, one of the men from his team would ensure the bag found him at whichever hospital he made it to. Every one of his teammates did the same, maybe at a different time or in a different way, but it was an unspoken ritual.

Restless, he walked to his team’s ready room, the war room. The room where everyone prepped and readied their gear for each mission just as the armies of old did before them, or so he liked to think. Standing at his wooden cubby, he pulled out his kit: what they called body armor. He adjusted the straps and ran his fingers over the already full magazines knowing each bullet was previously loaded with intention. He unzipped the back pouch and carefully filled his Camelbak with bottles of water. He pulled out his rifle, released the magazine from inside, and worked the action. He cycled the optic on and off. You can never be too sure about such matters. On and off, his laser flashed on the wall next to him.

Next was his helmet. He checked the communication wires and wiggled the night vision goggles back and forth and looked through them, confirming the green tubes would illuminate as expected. He methodically touched everything: his radio, his rucksack. He placed various items in the pockets of his pants and shirt just as he always did: pocketknife, latex gloves, Chapstick. He laid the clothes on top of his small space. Checking his headlamp, he replaced the batteries inside. He strapped a belt of 40mm grenades to the outside of his bag. Their golden heads shined up at him like prizes waiting to be opened. He inspected his medical gear carefully, thinking silently through protocols, dosages, and scenarios. Hot, red blood flooded his mind as he continued accounting for each item. Each piece of equipment had a job and a secondary job. There was no room to carry anything that didn’t have multiple purposes.

Smoking a cigarette, he walked the gravel path back to his room so he could shower and sleep until it was time to begin work the following night. He grabbed a small plastic basket with the metal handle that held his bathroom items and descended the creaking stairs leading out the front door of the huts, careful not to let the door slam behind him. On nights like this, he couldn’t see the ground in front of him, only the strand of red rope lights that illuminated the foot of the bathroom door out in the courtyard.

He rinsed, lathered, and stayed motionless under the hot water for a few minutes. Not a very popular use of water in an environment where water is in short supply, but it didn’t matter at the moment. He stared at the water pooling at his feet, swirling over the drain. Dirty footprints lined the perimeter of the stall floor where the water scarcely visited. He watched one of his long hairs fight to stay afloat among the last few bubbles, finally surrendering to the current and washing away. The water stopped and his hand left the chrome handle. Standing there naked and dripping, he heard a stall open and shut. His nose filled with an aroma of Irish Spring and dirt and the otherwise expected smell of a highly used Men’s room. He stood there dripping, thinking of tomorrow, thinking of home, thinking of her.

All he could do now was wait as he laid back in his twin-sized bed with the beaten mattress that crunched beneath him. He closed his eyes and waited to step out to the blackened helicopters that blended into the darkness of the tarmac. They were only heard and never seen, just as he and the others soon would be. He saw the green painted images of his friends’ faces, some laughing, some smiling, and some serious as they crawled into the belly of the loud, dark beasts. Their beards blew to the side and every other way in the hot engine exhaust.

He could feel himself sit on the edge of the cargo area, in the door, feet dangling in the frigid air. The helicopter floor was cold and pierced straight through his pants to the back of his thighs. He clipped his safety lanyard to a cargo ring on the floor without looking, taking in the horizon of dimly lit structures and tents that sat just off the taxiway. He wondered what the people inside were doing. The rotors turned faster, sinking him into the floor, and the weight of his rucksack pulled him back slightly as the wheels and his feet and his cold toes rose high into the sky, and they disappeared into the night.