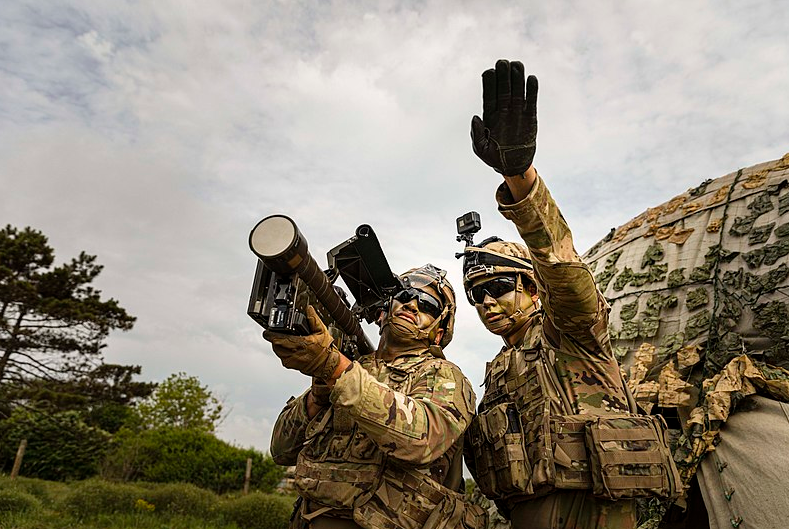 Author’s note: The primer below is a fictional narrative initially written for Senior Army leaders to set the scene of potential future combat realities. Created in effort to aid their decision-making in funding possible material solutions to identified capability gaps on the near-peer battlefield. Since this primer’s initial writing 24 months ago, the Army Futures Command (AFC) has been created and as a secondary effect reorganized who within the force has the responsibility of material or non-material solutions as well as time and space of these solutions.

This primer is in the vein of Asymmetric Warfare Group’s (AWG) Battle of Duffer’s Drift, a narrative piece to produce thoughts and highlight the threats and improvisation future commanders are going to be required to execute on future battlefields. The narrative paints a realistic view of new domains as well as their gaps and seams. Gaps that can be exploited based upon capabilities being observed on global battlefields.

The morning broke like any other on that cold bleak November day in Washington D.C. Adam went thru his normal routine before he started his long drive to his office in Reston, Virginia. The only saving grace for him was that he was traveling against traffic as he made his way winding along Route 267. The building that he worked in was a typical Northern Virginia office building, the only thing that made it stand out to the trained eye was the security cameras on every corner of the building and the discretely armed security guards who regulated access to the secure facility located on Herndon Parkway.

Adam had worked for the Defense Advanced Research Projects Agency (DARPA) for the last 10 years since he had graduated from Massachusetts Institute for Technology (MIT) and now he had been moved off-site to work with other interagency partners. His specialty was working on different defense problem sets within contested electromagnetic spectrums, specifically, he worked on a program called HUBCAP.

6,300 miles away the XVIII Airborne Corps began its push into Tehran. Maj Harmon, on his tenth deployment in the U.S. Central Command (USCENTCOM) area of responsibility (AOR), had been dispatched to one of its brigades to advise and assist in their operation to take back the hallowed mountain city. He was gruff and tired of the same old advising of a new Brigade commander who thought he knew it all. But MAJ Harmon realized that the insights held from almost a decade of combat would be invaluable to a Brigade that had seen detrimental turnover in the last two years.

His last assignment as the Defense Attaché to the U.S. Embassy in Ukraine had shown him how much warfare changed as he was able to see firsthand the Russian Spetsnaz units supporting a nearly bloodless annexation of Crimea and then sparking a “secret” pro-Russian insurgency in Donbas. Those were chaotic days in the Embassy as other U.S. advisers swooped in and out trying to glean as much information as possible from this new emerging way of playing the game.

But the embassy days of cocktail parties and a warm apartment were far behind him as he sat in the TOC with the Brigade Commander, the winter chill had not yet started to settle over the valley that lay before them, but the village of Allayar in the Qom province just on the south of Tehran gave the Brigade the best vantage point to plan their advance into Shamsabad Industrial City (SIC).

For the Corps, it was imperative that the Brigade take SIC so that other elements could then come in and take down Iman Khomeini International Airport. Maj Harmon understood the importance of taking SIC but he was concerned, this was not an insurgency movement the Brigade was going up against, it was a state actor who had the full defense mechanism supporting the regime. This was the same state actor who had exported terror thru the Quds force and the same regime that had taught IED technology to Iraqi insurgents in 2007. The Brigade was going up against a formidable foe and Maj Harmon knew that what was packed into five Pelican 1650 cases would give the Brigade a newfound advantage over the enemy.

Adam slipped behind his desk Starbucks coffee with a scoop of protein in hand and immediately started reviewing his SIPRNET traffic, the chatter of the office coming alive could be heard around him, but he had no time. His focus was on a response email letting him know that his package had arrived and that the operation check was successful. There it was buried in amongst all the other standard EO training, intel update emails, etc.

There it was in the email, the slaughter of Yasuj…………………………….Adam read the town’s name again and it brought back memories that had been the catalyst for him to load five 1650 Pelican cases chock full of DARPA’s latest baby HUBCAP. Adam scrolled over to USCENTCOM SharePoint, he wanted to read thru the AAR of the battle of Yasuj to remind him of why he was working on HUBCAP. As Adam scrolled through he could immediately pick out the key parts…………………….the Brigade has gone in to contain the town of Yasuj that had been a Quds Garrison. As the Brigade moved in every time the TOC set up it was rained upon with artillery, no matter what masking they did or jump TOC they executed they were continually set upon with merciless direct fire. With no TOC this led to total confusion on the battlefield. It was a blood bath with a casualty rate of upwards of 40% of the Brigade. This had been the driving factor for the creation of the fusion cell that Adam worked on now.  The solution that the cell had come up with now sat 6,300 miles away on a hillside overlooking Tehran.

Maj Harmon sat down with the Brigade Ops to discuss the distribution and employment of HUBCAP………………………………… Brigade Ops had heard of HUBCAP in passing but had blown it off as a science experiment now MAJ Harmon was being tasked to implement it into the Brigade’s movement plan per the CG as they made their push for SIC.  The Brigade Operations Officer asked Major Harmon for an in-depth breakdown of the system.

Maj Harmon said: “Hello Operations team, after the battle of Yasuj it became apparent to the analysis in the fusion cell stateside that the Brigade had done everything right, but that the enemy was able to detect and acquire their location through the electronic signature emitted from the Brigades TOC. They noted that the Quds Garrison was able to track the TOC’s movement thru a combined use of electronic signature followed up with UAS validation prior to direct fires. This led to the TOC being bombarded over and over.  It was like shooting fish in a barrel. With HUBCAP we are creating ECM spoofing that will mimic a TOCs electronic signature so that we can tactically deceive the Iranians.”

The Ops Officer replied in a sarcastic tone “How will we accomplish this with five Pelican cases?”

Maj Harmon sighed and prepared to give the short tactical explanation like he had given at the SOCOM Commanders conference a year before…..as he liked to say it was his HUBCAP elevator speech…..” Sir HUBCAP is a small backpack deployable system that can be dropped in different areas to replicate the Brigade’s TOC and lines of movement…..we will use reconnaissance elements to emplace them as electronic decoys that will occupy the enemy’s time and resources while the real TOC continues to jump and blend in amongst the RF noise. This will seamlessly allow the Brigade to move without getting bombarded!”

The Ops Officer looked up and a grin cracked across his face. He grasped the concept and it all made sense now. HUBCAP was hours from operational employment and proving on the battlefield how success in the RF spectrum was possible. Maj Harmon wheeled in the pelican cases and signed them over to Ops, it was time for the Brigade’s reconnaissance elements to get busy emplacing the decoys for the battle for Shamsabad Industrial City (SIC).

Afterword: In September of 2019, an E-4 Specialist asked a poignant question of the 32d Army Air Missile Defense Command, Commander at a unit Townhall, paraphrasing;

“Sir, if we can see the enemy, I know peer adversaries can see our equipment, having been a counter-fire field artillery crew member before becoming a 14 series, it worries me that we aren’t doing enough to conceal ourselves, I’ve seen what we can do to the enemy”.

Powerful thoughts from one of our junior enlisted men. If our Air Defenders are critically thinking about LSCO gaps, shouldn’t we all, shouldn’t leaders be kept up at night trying to address these known issues, and what measures or METL tasks can be focused on during home station training to at least mitigate some of this risk?

This first appeared in The Havok Journal on August 26, 2020.

Major Joshua A. Lyons is a graduate of Indiana University Class of 06’ where he was commissioned as a United States Army Air Defense Officer. He holds a Master’s in Military Operational Arts and Science from the United States Air Force Air Command Staff College. He serves as the Active Defense Chief at the Army Air Missile Defense Command level within the Combined Air Operations Center.  He additionally served a three-year tour as an Operational Advisor with the U.S. Army Asymmetric Warfare Group as a Troop Commander and the Group S-3. His other works include Defining Cross Domain Maneuver for the 21st Century, the U.S. Army Travel Awareness Handbook, and multiple articles within the Small Arms Review and the Asymmetric Warfare Journal.