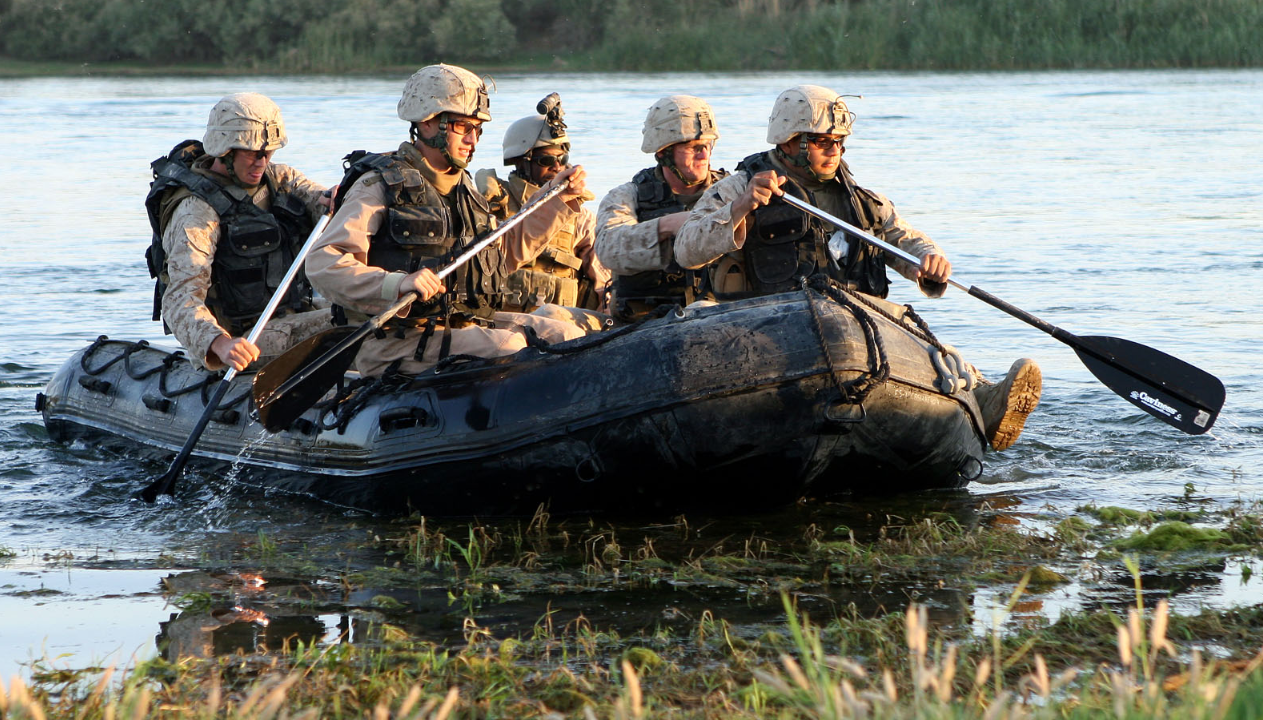 The Marine Corps established the Marine Raiders in World War II to perform clandestine amphibious raids against Japanese-held islands in the Pacific. Their heroism in battle in places like Makin Island, Guadalcanal, and Bougainville cemented their place in the Marine Corps special operations history. Marines today honor this proud lineage by continuing the Raider paddle tradition in the infantry boat companies, Reconnaissance Battalions, and the Marine Raider Regiment. According to tradition, Marine Raiders presented their departing teammates with a decorated paddle to commemorate their service to the unit.

These Marines took one of the paddles they used to transport their team into battle, sanded it down to make it presentable, and personalized it to the recipient. They wrapped the handle in paracord, painted the blade with unit logos, and decorated it with military insignia. The Raiders would gather at the beach to present this gift, often over a bonfire, to tell stories about their departing teammate as they shared frosty beverages together into the evening hours. It’s a beautiful tradition and Recon Marines and Raiders today always explain the origin of the paddle party before presenting it.

There is only one problem with this legend: the Marine Raiders and Amphibious Reconnaissance Marines in WWII never had a paddle tradition.

The Recon Marines and Raiders tended to give each other knives and unit plaques, not paddles.1 There are a number of these plaques in the heritage rooms across the Marine Recon battalions from WWII, the Korean War, and Vietnam. It was not common for Recon Marines to present each other with decorated paddles until the 1960s.2 Even then, it wasn’t a widely shared tradition. Fifth Recon Battalion seems to be the only unit in that era that gave out paddles, and then generally only to their senior enlisted and officers.3,4

It does not seem that this tradition spread to the other reconnaissance units in the Vietnam era. There are indications that some individuals, possibly veterans from 5th Recon Battalion, may have presented some of their teammates with paddles at other units but this happened infrequently.6 There may be a simple explanation for this. 5th Recon Battalion sent Marines to Vietnam but never deployed there as a battalion.7 Paddles are much more suitable gifts for a garrison battalion like 5th Recon to present than Marine units forward deployed to combat. Marines could procure unit plaques locally in Vietnam and plaques were much easier to transport than paddles.

The end of the Vietnam war closed a storied chapter in the history of Recon Marines. The Marine Corps shrank after the war and deactivated several Reconnaissance units, including all of the Force Reconnaissance Companies. Reconnaissance Marines in the three remaining active duty Reconnaissance Battalions kept the recon traditions alive in the inter-war period and even came up with some new ones of their own. Sgt Armando Alonso, the SCUBA locker NCO at 2nd Recon Battalion in 1974, was in hot water with the battalion SgtMaj. He hadn’t ordered enough paddles to restock the boat locker and now the battalion didn’t have enough for their upcoming amphibious exercise. The paddles weren’t in good condition to begin with, so the SgtMaj asked the supply officer to order replacements for the entire battalion. The boat locker was supposed to get rid of the old paddles, but Sgt Alonso thought it was a waste to throw them away.

Sgt Alonso came up with a better use for these old paddles. One of his friends, SSgt James Ortega, was leaving Bravo Company in 1974 with orders to the drill field. He took one of the old paddles, sanded it down, and painted it green. He painted a 2nd Recon Battalion logo on the blade, along with a personalized message and Ortega’s tour dates.9 Sgt Armando didn’t know it at the time, but he was making SSgt Ortega the first paddle in the current Marine Recon paddle tradition.10

Other Marines in the battalion noticed the beautiful gift and Sgt Armando became very popular during the next summer PCS12 moving season. He made paddles for several Marines at 2nd Recon Battalion, including his company commander Capt Zachary Forrester, and platoon commander 1st Lt Gordon Nash, who later became the Commanding Officer of 1st Force Reconnaissance Company and retired as a Major General.13

Unfortunately, the grandfather of the modern Marine Recon paddle tradition did not receive a paddle himself. The Marine Recon Foundation and the Marines of 1st Force Reconnaissance Company corrected this oversite in 2019 with a surprise paddle presentation for Mater Sergeant (ret) Alonso at the 1st Reconnaissance Battalion heritage room.

The paddle tradition appears to have hit 1st Recon Battalion in the late 1970s or early 1980s. For some reason, the Marines stopped painting the paddles and started staining them instead. They also began wrapping the handles with paracord shortly afterward. Some Marines from that time period believe that the Navy inspired the Recon Marines to wrap the paddles.19 The Navy SEALs also have a long-standing paddle tradition, and it is very possible that the two communities shared paddle-making techniques during underway deployments on the newly created Marine Expeditionary Units. It’s hard to say why this tradition began but it is clear that Recon Marines started wrapping paddles with paracord in the early 1980s.

A history of the Marine Recon paddle tradition would not be complete, however, without a discussion about the paddle presentation party. Recon Marines have celebrated their departing teammates since the beginning of the Reconnaissance and Raider communities in WWII. These two communities are very connected to the ocean, and it should not surprise anyone that many

of these parties occurred near water. The current tradition that inaccurately connects the paddle tradition to the Raiders is not nearly as old. It has been very difficult to accurately track when and where this faux legend first appeared but some Marines at 1st Recon Battalion20 remember it happening regularly in the mid 1980s.21 This timeline roughly coincides with the re-activation of the Force Reconnaissance Companies and the creation of the Marine Expeditionary Units and the Special Operations Training Groups. These Marines may have wanted to connect their newly reborn formations with the elite lineage of the Marine Raiders to instill a sense of pride in their teammates. Regardless of the reason, Marines across all the Reconnaissance units eventually adopted this idea and weaved this narrative into their paddle traditions.

Other traditions emerged in the 1980s as well. Recon Marines adopted the tradition of doing 25 and 5 push-ups during this period.24 A senior Marine would call a number cadence to lead his teammates through 25 push-ups and shout Airborne, SCUBA, Recon, Ranger, and their unit (1st Recon Battalion for example) for the last five push-ups. Marines generally love doing push-ups and it didn’t take long for this to take place at paddle parties as well as promotions, re-enlistments, and awards ceremonies. Marines at the Basic Recon Course and Amphibious Reconnaissance Course would end the last push-up of their 25 and 5 series with their class number. It’s also a common and somber tradition at funerals for members of the Reconnaissance Community to finish their 25 and 5 push-ups with the name of the fallen.

These pathfinding Marines also experimented with other bold innovations that did survive into modern tradition. The shirtless jean shorts uniform for paddle parties, made famous by Navy jet pilots in the movie Top Gun, failed to take hold in the modern era.

Some Marines would also spray their teammate with beer at the conclusion of a paddle party.26 Beer is certainly a common sight at paddle parties but spraying it at the departing Marine is not common in the current tradition. Marines also used to sign the back of the paddle after speaking, with the commander or senior Marine present closing the ceremony with their signature on the paddle.27

This paddle history is not exhaustive of course. There are exceptions to every rule, and this tradition is no different. Sgt Armando Alonso was not the first Recon Marine to decorate and present a paddle to a teammate. There is evidence that other Marines at other reconnaissance units had this idea before him.

For some reason, however, these other paddle makers did not inspire future generations to adopt this tradition. It appears that they presented these paddles as unique gifts, similar to how some Recon Marines will give their teammates decorated dive fins. Armando Alonso is directly responsible for inspiring generations of Marines to wrap paddles for not only each other but also older generations of Recon Marines to commemorate their contributions to the Recon community. This makes Sgt Armando Alonso the father of our current Marine Reconnaissance and Raider paddle tradition.

Some Marines may be disappointed to hear that despite what they learned as young Recondos, the Marine Raiders did not start this illustrious tradition. The information presented here challenges almost 30 years of proud Reconnaissance lore and legend. Ultimately, however, it is important to recognize the true origins of our traditions, especially if those Marines are still alive and available to engage with our newest generations of Recon Marines and Raiders. Some details of the paddle tradition may be inaccurate, but the substance of this legacy still holds true. In 1974 a Recon Marine took an old paddle from the boat locker, decorated it, and presented to one of his teammates in appreciation of his hard work. Reconnaissance Marines and Marine Raiders have been decorating paddles ever since.

LtCol Byron Owen deployed to Iraq twice as a platoon commander with 1st Battalion, 1st Marines. He served as “Jaeger 6”, the platoon commander for 2nd Platoon, 1st Force Reconnaissance Company in Afghanistan, Alpha Company Commander and Operations Officer for 1st Recon Battalion, and “Broadsword 6” the Commanding Officer of 1st Force Reconnaissance Company. This article is not an official position of the US Marine Corps or the US Government.

2 Ed McCourt (1st ARC and Marine Recon veteran) interview with the author, August 2017. Capt Ed McCourt received a paddle upon leaving 1st Amphibious Reconnaissance Company in 1955. According to him this was a unique gift and not a tradition.

6 Several veterans told me that they heard of Marines presenting paddles in Vietnam but didn’t see this practice themselves. One of them mentioned a possible connection to 5th Recon Battalion but couldn’t confirm this.

This first appeared in The Havok Journal on October 26, 2021.