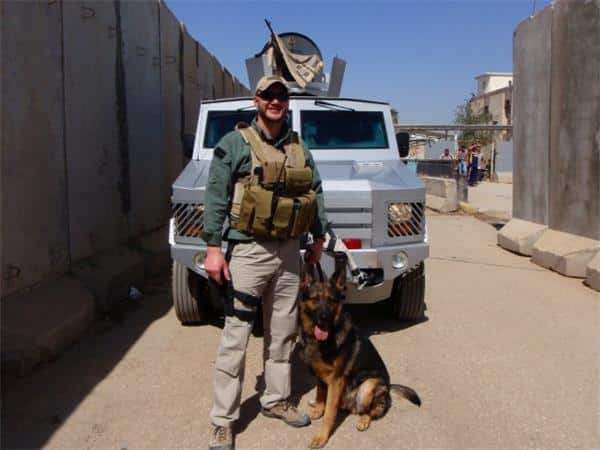 One of the great things about this job is that I get to engage with Veteran owned businesses and nonprofits, who are out there making a positive impact in the world and finding a way to give back to their community.  I recently needed the immediate assistance for MPC Spike, also known as a multi-purpose canine,  for the 75th Ranger Regiment who served 3 combat tours in Afghanistan was diagnosed with advanced cancer. Within hours, we were connected with Jason Johnson and K-9 Project Hero and their service was unlike any other I’ve personally experienced. Within 48 hours, we raised funds and were able to get bills covered for MPC Spike through Project K-9 Hero. We are excited to share more about Jason Johnson and K-9 Project Hero, if you are looking for another nonprofit that we endorse, please check them out! Enjoy.

This first appeared in The Havok Journal October 18, 2018.

HJ: Tell me more about your career or life path that led you to your nonprofit?

Jason: Growing up I always knew I wanted to be a soldier. My grandfather’s both served in combat, U.S. Marines during the Korean War, and U.S. Navy Seabees during WWII respectively. At a very young age I had made up my mind to go into the U.S. Army, which is what I did right out of high school. I spent five years as a U.S. Army Military Police Officer, but from 1993-1998 we weren’t engaged in as much action as I envisioned it to be. However, during my time as an MP, I was introduced to the world of K-9 and became driven to become a handler.

I felt the best career path for me in 1998, would be to leave the Army and pursue a career in civilian law enforcement. There I felt I would be able to work hard to fulfill my dream, since I never was given the opportunity to become a handler while on active duty. I started my career in 1999 at the Puyallup Police Department, just outside of Fort Lewis, Washington. As soon as I could, I began volunteering for the Pierce County Metro K-9 Unit as a bite decoy. K-9 is a very small circle and it takes a tremendous work ethic to maintain a good partner. Showing your desire and volunteering to get into the bite suit every chance you can is a great way to earn the respect and trust of the other handlers in the unit.

I worked as a bite decoy for several years until I did a lateral transfer to the Yakima Police Department at the end of 2002. While at the Yakima Police Department, I continued as a decoy for their K-9 unit and started working with the local State Patrol K-9 Unit, who had begun training their own detection K-9’s in house. I quickly learned the skills and the protocols to train detection K-9’s by working with them and attending their training days on my off time. Since my department did not have a detection K-9, I trained my very own, a yellow lab named, Justice. Justice and I began working and training every day we could with the local detection teams until we put a proposal into the Yakima PD to start a new Narcotics K-9 Detection Unit. Fortunately, since I had dedicated the last five years of my career to becoming a Police K-9 Handler and had logged hundreds of training hours on my own, I was selected to become the very first narcotics K-9 Handler in the history of the Police Department.

I attended a U.S. Border Patrol run class where we selected our own K-9’s and trained them from day one through graduation. Learning how to evaluate a dog’s drives, temperament, environmental and social confidence in this course gave me a great foundation for years to come in my profession. This is where I encountered a K-9 who had no name and was found on the streets with no home. She was a 50lb German Shepherd/Cattle Dog mix who was deemed unadoptable because of her high amount of energy and animal aggression. Not one handler in my class wanted to work with Flash or train her as their own. I saw a ton of potential in Flash and agreed to make her my partner amongst the several dogs I was working with in my class.

Flash went on to be the only K-9 in her class to score 100% on her initial certification, and we went on to do great things together after graduation. I was also a member of the Metro SWAT Team, so in addition to serving narcotics search warrants with SWAT we worked for the uniformed Patrol Division, and with two different DEA Drug Task Force Units. Flash became known as the go to K-9 in all of central Washington State. However, in 2008 I received an opportunity that I could not pass up and had to leave Flash behind to continue with a new handler.

I had been recruited to become an Explosive Detection K-9 Handler and a Personal Security Specialist for Blackwater in Iraq. Once I successfully passed a one-month hands on vetting process between the PSS Course and the K-9 Course, I was assigned to Blackwater’s Red Team 44 and Brown Team 46 as their Explosive K-9 Handler. There I conducted missions outside the wire in support of the U.S. Department of State’s High Threat Protection Detail, the U.S. Department of Defense, and other governmental agencies. It was a dream job for me to be independently handling a dog protecting dignitaries throughout Iraq at the highest of levels. I went on to conduct over 100 red zone missions in Iraq for Blackwater K-9, also serving on Blue Team 40, Green Team 42, and Black Team 48 while handling six different Explosive Detection K-9’s and serving as our in-country trainer.