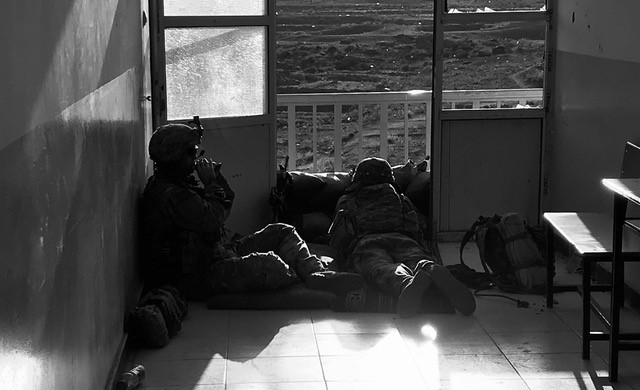 The following is part of a collection of short stories titled Insha’Allah: Short Stories of the Long War in Afghanistan–titled “Heavy Eyes.” Chris Fitzmaurice began writing this collection while deployed to Afghanistan in 2018. He wanted to share the lesser-known side of the war with friends, family, and, one day, readers.

David lay on the cold tile floor, staring out over a small finger of the village. The sun had been up for only an hour or so, but the townsfolk were coming to life. A farmer-led his mule by the bridle down a road in the distance, kicking up a cloud of dirt. A woman, hidden by her hijab, ushered her small children out of a nearby courtyard. Maybe to the local school, or to the market. The kids swirled around her, giggling loudly and squealing in a native tongue. David stared out over the dark green, synthetic sandbags and his eyelids felt heavy.

His assistant gunner, Gary, sat propped against the wall to his left, inside the long, white hallway. The tiles of the hall were scuffed, bruised, and cracked. They had seen a lot of miles. A film of sand coated the floor, much like a pub shuffleboard table. The thought made him recall a fond night out before leaving his home, playing games, and drinking beer with his close friends; David had even met a girl then. He was not married. They drank down their glasses and talked excitedly in slurred voices about the trip ahead, a first for each of them.

The school surrounding them was well built, one of the nicer buildings he had seen during his time in the country. The classrooms were lined with desks and tables—chalkboards full of illegible symbols and writing, indeed some kind of teachings. The interpreter found stacks of books, all problematic with suggestive, violent content. Propaganda at its best and directed toward the younger, more pliable minds. There were papers left in the rooms with colorful drawings from the schoolchildren. Crayola scribblings that were disproportionate to the world around them. He could imagine the kids laughing and reciting lessons as he walked the rooms earlier, clearing them, making sure the building was as unoccupied as it looked from the outside.

Gary was fast asleep, drool pooling in the corner of his mouth. The five o’clock shadow on his face would infer to a stranger that he had not been around a sink or razor for a few days. He slept with his arms hugged around his cumbersome plate carrier, hoping to warm himself in the morning chill, but it did not.

Lying prone on the tile floor, David would stay awake, scanning, assessing, and keeping watch while his buddy rested. After an hour or two, the men would switch roles, staying close by one another, able to be woken at a moment’s notice if needed. They were a team, no one being more important than the other: a well-oiled machine.

On the other end of the building, there was another pair, identical in skill and purpose. That pair held security watch in the opposite direction, guarding the school the team was forced to stay in for safety and cover during the daylight hours. The job was tedious but essential. The rest of the group performed other duties, including taking watch throughout the day. There was always work to be done: radios to monitor, mortar lines to be plotted, patients to be treated. The interpreter and his American counterpart listened to the local radio traffic intently, obsessively, hoping to hear of an attack before it was felt. They often hung, tired-eyed but wide-eared, on every word. Their job was also dull but just as important. Each man was a small cog in a more giant wheel. Each job was a necessity to keep the gears turning.

David lay on the cold tile still, reaching blindly for a foil packaged snack. He scrunched his nose at the dried and hard turkey nuggets but pressed on anyway. Being picky with your food selection while on a mission wasn’t afforded luxury. He chewed and chewed the dry, packed meat. It stuck in his throat like pasty crackers, and he washed it down with a pull from his Camelbak. The granules of sand from the drinking port washed between his teeth as he sipped. He coughed, making the dust on the floor rise around him, before settling as a brown film again. His mind droned at the thought of another long day.

The floor shook from the impact. The walls rattled, and windows shattered, crashing glass into the rooms. A mortar had struck just a short distance from the building and jarred everyone inside. The sleeping gunner jolted awake, red-eyed and disoriented. Shouts filled the building.

“Where the fuck was that?!”

“Somebody call it out!”

The voices echoed in the tense air and reverberated in every corner of every room. The plume of smoke from the impact site had nearly dissipated when they reached the window. Radio traffic surged; everyone was on edge. David lay there quietly, not leaving his position. He scanned and searched, thinking a silent prayer, “Keep us safe, just this one time.”

To be shot at didn’t anger him, it was offensive. “How dare you? Do you know what will happen?” It was routine by now to be on the business end of a large explosion, but still unsettling. The sound of an RPG flying through space was unnerving. Still, it was normal. However, to feel targeted, like a sitting duck in the sites of a mortar team, was terrifying. The thought of it shook him to the core, just as the recent impact had. There was nowhere to run, nowhere to hide. His helmet and body armor gave a slight sense of protection, better than nothing, but small.

The whole team was taking turns on the radio, pinpointing the origin of the blast.

“It was from there!”

Nobody truly knew, but the suspicions were ever-present.

The glass left standing after the first mortar round was shattered after the second round impacted–much closer than before. Charred dirt collided with the opposite side of the school, some sticking to the off-white, stucco-styled walls. David’s head rang with fog, and his vision blurred for a moment after the explosion. He instinctively shook his face from side to side, his helmet shifting uncomfortably as he attempted to shake off the concussive force. More shouting and searching echoed down the corridor. Heavy, hurried footsteps became an undertone to the shouts. He felt smaller and smaller where he lay. He felt like a tiny blip on a large map, waiting to be spotted. He focused on his sights, and they cleared after a moment. David blinked away the fog and watched the village through 6x magnification.

The men who were eating abandoned their food, smearing it under their boots as they stomped from room to room. Everyone was bug-eyed. Everyone was at a stage of alert that could only be replicated by a potent amphetamine. The air felt flat and thick and electric. Fifty wild eyes scanned windows, trees, roofs, and courtyards. David felt naked, laying there exposed to the world, but no way to hide or no better place to run.

When the third round landed, smoke filled the long, tiled hallway. Bits of concrete shattered in fragments from the ceiling above, clattering against anything in their path. Bags were covered in dust as the cloud rolled through the rooms persistently. The world became silent and appeared to be in slow motion. David’s partner hunched beside him, covering his ears. David felt the blast in the roots of his teeth, and it ached on the surface of his bones. He thought the building would collapse altogether. The concussion shook every inch of his body. He was still shaking. Not a noticeable amount, but he could feel it in his hands, see it in the sight of his weapon.

David thought of his parents, his younger sister. He knew they were on vacation and she was away at college. His mind drifted to the last date he went on: the date when he didn’t kiss the girl across from him at the end of the night. Why hadn’t he kissed her? He wished he had now, more than anything else. He thought of the day before and the day ahead. He thought of being scared as he looked through his now smudged and dirty glasses. His head felt like it was caving in. He imagined his head splayed open in time, watching from above. He could see the insides of himself spilled onto the cold, tile floor. But they were not. His skull pounded, and everything resumed to a normal speed. Someone turned the volume knob upward, and the shouting from every room grew louder and louder.

“We’re good, we’re good!” David heard Gary yell but could not help but wonder if he was, in fact, “good.” The invisible ax split his skull over and over again. The screaming pain was relentless. He knew his partner must have felt it too. He wasn’t scared anymore.

The round impacted directly above David and Gary’s position on the rooftop. He could see the spidered fractures in the concrete ceiling when he rolled onto his side. The glass from the windows and floor sprayed toward them as if blown from a wood chipper. Ultimately, he was okay, as was Gary. They looked at each other and laughed a nervous laugh between shared profanity. They didn’t hug or shake hands or high five. They just laughed a burst of nervous laughter. David felt like the village was more vivid and colorful. He felt a warmness for Gary. He felt lucky to still be lying on the cold tile floor and lucky to still feel that it was there. David’s head pounded, his hands shook, his teeth ached. His fingers felt for every depression and detail of his weapon.

This first appeared in The Havok Journal on August 24, 2021.

Chris is an American Military University graduate, writer, and U.S. Air Force Special Tactics veteran. He specializes in fictional short stories, freelance writing, and fighting the Oxford comma. Chris is an avid outdoorsman who enjoys summers of rock climbing and winters of skiing. He is based out of Cambridge, England in between frequent trips on the road.