HomeCultureMilitaryFriends Lost in the Sandbox 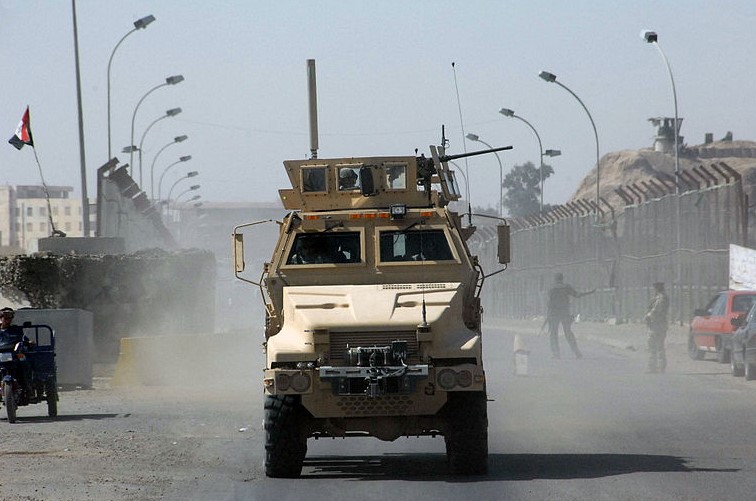 I am no special operator, ranger, or grunt of sorts. I never get why so many people I speak to about military service feel they must sound like some ex-spec ops soldier to have a good story. The military has plenty of other jobs and an equal amount of suck-per-MOS ratio for those fields. I signed up to be a mechanic, despite my recruiters’ desperate attempts to get me into other positions due to my ASVAB score. Unfortunately for him, as a young guy, I always admired people who could fix cars, and thought Humvees were cool… so off I went.

This is about an experience close to my heart, and how sometimes things are too much of a coincidence to be a coincidence if you understand what I mean. I don’t consider myself a religious person by any standard. I did attend private school as a kid, learned about God and the Bible, prayed at night before bed, and feared a higher power like most kids growing up that way. But over time, I became more of a “don’t be a dick and dick-shit won’t happen to you” kind of guy. Some call that Karma.

I spent my first year in service at Camp Hovey, South Korea. I Went from AIT right into HHC 1st Bn, 9th Infantry (Mechanized), 2nd Infantry Division. Looking back on my service time compared to others, I’m glad I went straight to active component and was shipped immediately to another country. Ripped the band-aide off quickly going to Korea at 19 years old, barely leaving Florida in my youth. It made me a great mechanic because for over a year I worked nonstop on equipment we used every single day. There were no civilian vehicles, we went everywhere via HMMWV or MTV so we needed them to work all the time, with no excuses or waiting for later.

The other perk of living far away in Korea was it made all of us in the unit close. The technology of that time was shitty Korean cell phones with calling cards and desktop computers with shitty webcams and internet service to match. So you literally had no one else but other soldiers aside from an occasional call home. I didn’t attend college prior to joining the military so barracks life was as close to a fraternity as I got. No women in those combat units so things got real weird after sundown in the B’s. You guys know what I mean: walking to your room in Korean War-era barracks that were falling apart, LAN lines all over the place for guys playing Halo on Xbox, the smell of someone cooking Spam in a frying pan, stepping over half-naked guys covered in shaving cream wrestling each other in the hallway while the new guy is in the corner with beers duct taped to both arms as he plays Edward-40-Hands with some well-seasoned E4s. Those were simpler times.

Initially, there wasn’t space for me in any of the rooms allocated for the mechanics. I spent my first month or so living with guys from the Scout platoon. My roommate Wade was older than me by about 6 years and immediately took me under his wing, realizing I was young and semi-terrified being new. He took me out with the Scouts and got me obliterated my first weekend in country, having me do their “right-of-passage” by attempting to drink a Flaming Doctor Pepper at every bar on the strip. Let it be known, I never really drank before the Army. I left for basic as a weed smoker but left Korea with an iron liver. That being said, I made it through about 16 or so FDPs before I woke up half-naked and covered in puke in my new room. I didn’t win their coveted trophy for completing the alcohol-poison-inducing bar hop, (it was a belt buckle or something if I remember) but I did earn my place as one of the guys by not going out without a fight. And that meant everything to me.

I have countless stories from Korea, but the point of this tale is that we all became brothers as well as dysfunctional day drinkers with a dash of crazy. But we were all we had. There was no “heading home after work” or “leaving town for the weekend to see my fam” living in a place like that. We literally went from the barracks to the motor pool and hit the gym and DFAC in between. Being in a mechanized infantry unit everyone had vehicles needing service, plus we spent months of the year in the field training for combat, so you made lots of friends as a mechanic. So, when the orders finally came down to deploy to Iraq, we were ready not just as a unit but as a family.

During our time in Ar Ramadi, Iraq (Aug 2004-July 2005) we suffered heavy losses from our Brigade Combat Team. It was to the point that we had Soldiers from other units stateside sent to fill in the gaps. One of those losses occurred on March 4, 2005. I was on my way back from R&R leave at the time, and my Company Commander, Capt. Lopez was on the same leave chock as me. We were at a staging point on the way back into Iraq where we had to wait a few days until we could hitch a ride back to Ramadi. My Commander saw me and immediately pulled me into a tent. He told me to sit and sat down beside me. After a moment he said, “Johnson, I need to talk to you, it’s about Wade…”

My friend and former roommate from Korea, Wade Twyman had been killed in his Humvee after being hit with an IED along with three other Soldiers that I also knew and lived beside. The hardest part of hearing this for me was that I wasn’t there for my friend. I don’t mean physically in the truck, as I mentioned previously I was a mechanic and despite going on my share of convoys and QRF missions in the wrecker (a tactical tow truck) I had no desire to hop in a gun truck and be Jason Bourne. I liked my job and supporting my buddies by making sure those armored trucks ran like greased lightning. What I meant is I wasn’t in country, and I still carry so much guilt for being home and enjoying my family while my friend was killed in such a horrific way.

I missed his service by our Chaplain, Capt. Cantrell, and I didn’t get to hear him called out of ranks by the SGM. But a friend did save me a pamphlet from the event knowing I would want it. It’s something I still have and cherish along with a stack of other funeral pamphlets of friends lost in the sandbox. After that I quit praying because up until this very moment I still had some fear of a higher power. But how could a god take someone so young and so precious to me? Surely a god of people would do no such thing, so they must not be. After that, I remember sitting on the rooftop of our hooch in the evenings, and just staring at the sunset in the distance. Anyone who’s been in theater should remember those sunsets in the desert, they are truly breathtaking. I would laugh to myself that no wonder these people made up religion here because a sky like this couldn’t be explained in any other way but divine creation.

One night on my rooftop while watching the sunset I was ruminating on my time in the desert and remembered something that had happened at Christmas a few months prior. A buddy, Clark, and I had stayed up late so we could call our families for the holiday. It was the middle of the night, and we left our hooch to begin the long walk to the phone tent. Command had said to be cautious as the enemy would most likely try something knowing it was our religious holiday. But we figured surprising our families was worth the risk and it had been pretty quiet that night. About halfway there we heard that unmistakable sound indirect fire makes as it’s launched from outside the wire… “poof, poof-poof…”

I looked at Clark and yelled to get down as we dove to the nearest hard wall for cover. Sure enough, multiple incoming rockets hit the base, and to our horror, we saw where. Clark and I locked eyes and both said, “the phone tent!” and ran a full sprint directly toward the impact sight.

I ran as fast as I could, with tears in my eyes hoping no one perished while on the line with their families. As I rounded the concrete barrier entrance to the tent I ran smack into our Chaplain, Capt. Cantrell who was looking down at an impact crater where a large rocket hit but did not detonate. It was right next to the door of the tent, and it could have killed them all. We checked if everyone was ok, after which I dropped to my knees as a mixture of adrenaline and exhaustion came crashing over me.

I was so relieved that what I imagined had not come to pass. Fast forward to back on my rooftop. As I pondered life, I asked myself could this have been chance? That a tent full of joes on Christmas wasn’t killed by a rocket that was sent to their door? And that the Chaplain was there to boot? Or that the same Chaplain who didn’t die that day was there later to provide comfort while performing a funeral service for my friend and many others after.

I honestly don’t know. But I do know that 18 years later, I still think about these things every time I see a sunset.

Vincent served three years in the active Army from 2003-2006 under the 2nd Infantry Division as a vehicle mechanic and recovery operator. After leaving active service he completed another 12 years in the Army Reserve, before being medically retired in 2018.

Vincent was deployed twice; first to Ar Ramadi, Iraq in 2004-2005, and then to Kandahar, Afghanistan in 2010. Since 2007 he has held various positions in the Federal workforce, including the DoD, DHS, and currently working for the Department of Veterans Affairs a Medical Equipment Technician for the Prosthetics and Sensory Aides team. Vincent builds and maintains custom-powered and manual wheelchairs as well as other mobility devices for disabled Veterans.

Vincent holds a certification in Assistive Technology from the University of Pittsburgh and is currently working toward a degree in Biomedical Equipment Technology.