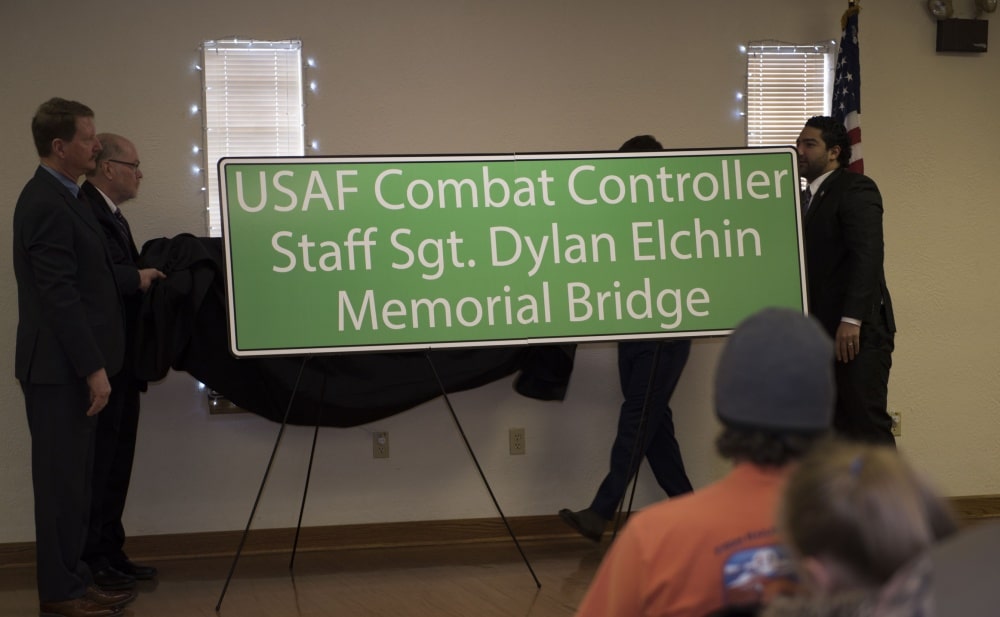 ROCHESTER, Pa. February 29, 2020– The Special Tactics community will forever honor the lives and legacies of the fallen and ensure their names will not die twice.

Elchin, while deployed to Afghanistan in support of Operation FREEDOM’S SENTINEL, gave the ultimate sacrifice on Nov. 27, 2018, when his vehicle hit an improvised explosive device.

“On Nov. 11, 2012, Veterans Day, [Dylan] wrote on Facebook, ‘I want to thank all of those who pay for our freedom, which some take for granted.’ Little did he know, six years later, he would pay that price,” said Bogolea. “Dylan’s life of duty, courage, sacrifice, and love of country reminds us what is good in ourselves and it teaches our children what is great about America.”

Pennsylvania State Senator Elder Vogel Jr. and other local representatives spearheaded the efforts in introducing the bill to have the bridge renamed in Elchin’s memory.

“Legacy is what gathers us here today.” said Vogel. “It is my hope that this bridge will encourage future generations to emulate the manner in which Dylan lived. Live for others as Dylan lived for his brothers in arms, his family and his community.” 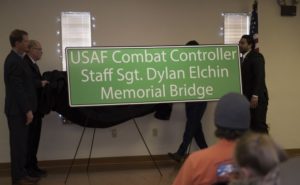 “Today this community gets to honor Dylan in a bridge renaming ceremony” said U.S. Air Force Col. Matt Allen, commander of the 24th Special Operations Wing. “It’s my fervent hope that those who pass across this bridge next week, next month, and in the years to come, to take a moment to remind themselves and reflect on the extraordinary service, sacrifice and commitment of one of the sons of this community, Staff Sgt. Dylan Elchin.”

“No matter what training we were doing he was always smiling and having a great time,” said Tech. Sgt. Adam Lollar, member of the 26th STS. “Whether it was a 1,600 mile off-road trip through the New Mexico backcountry or 100 plus degrees in the Nevada desert shooting.”

“I find it amazing to have the opportunity to witness the legacy and memory of Dylan being carried on, especially by his local community…seeing Dylan’s hometown uniting through his memory, especially someone like Dylan who gave everything for that community and this nation, is awesome,” said U.S. Air Force Capt. Marty Bouma, a flight commander with the 26th STS. “Dylan was one of the most selfless individuals I’ve met, but I know the way the community has come together in this would make him proud.”

For Photos of the ceremony: https://www.dvidshub.net/image/6120311/fallen-special-tactics-airman-honored-with-hometown-bridge-dedication