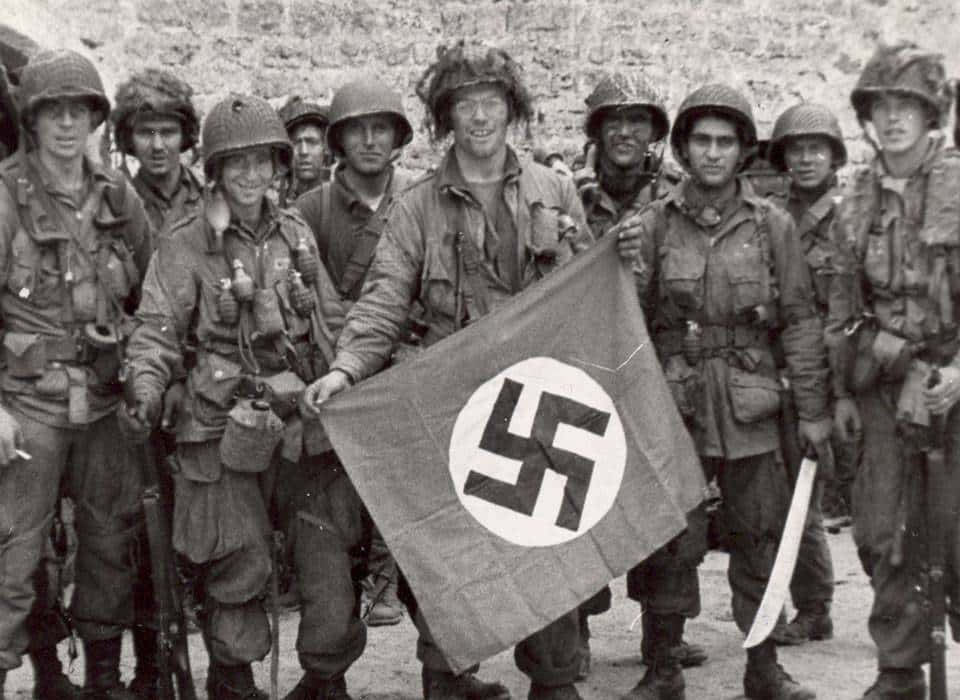 A group of individuals who came together to become one of the tightest fighting forces in World War II was the 506th Parachute Infantry Regiment, specifically Easy Company.  These young men, glamorized in the Stephen E. Ambrose book and HBO Series, Band of Brothers, epitomized the culture of Airborne units.  Stephen Ambrose chose to write about these men because he “astutely recognized the unit for what it was—a microcosm of the entire last year of the war in Europe; a story every soldier who served in the ETO would recognize and identify with, and on that future generations of Americans should know.”[1]  Much has been written about this group of courageous individuals, who assembled at humid Camp Toccoa, Georgia, and became a family on the battlefields of Europe.  They offered a perfect case study of what American Airborne units were like during WWII.

It is important to note who the men of Easy Company were, not because its individual were unique, but because their unit’s profile could have been any of the companies in the Airborne Divisions:

They were young, born since the Great War. They were white, because the U.S. Army in World War II was segregated.  With three exceptions, they were unmarried.  Most had been hunters and athletes in high school . . . They were idealists, eager to merge themselves into a group fighting for a cause, actively seeking an outfit with which they could identify, join, be a part of, relate to as a family.[2]

These men were ready to become something larger than themselves for unselfish reasons.  Ambrose pointed out they typically joined for two personal reasons.  The first was they “wanted to make their Army time positive, a learning and maturing and challenging experience.”[3]  Their second reason had to do with their level of confidence in the men to their left and right, and how well they were prepared to keep each other alive.  The men knew they were going to fight a war, and “they did not want to go in with poorly trained, poorly conditioned, poorly motivated draftees on either side of them.”[4]  Staff Sergeant Paul Miller recalls, “We were the first regiment to train as a unit and this was the best thing that ever happened.  We got to know the other men and could depend on them, whereas replacements who [were] not trained as we were didn’t last too long.”[5]  The men in the 506thPIR knew they were going to see combat, and they knew they could trust the men in their unit.

Other reasons, such as the jump pay bonus, proved to be factored in their decision-making process, but none greater than those pointed out by Ambrose.  All of these men “knew they were going into great danger.  They knew they would be doing more than their part.”[6]  For Easy Company of the 506thPIR, more than their part included combat in Normandy, Northern France, Holland and Market-Garden, the Ardennes and the Battle of the Bulge, and Germany.

An interesting member of the famous Easy Company was David Webster. Of all the young men who volunteered for the paratroopers, he had one of the more unique backgrounds among the men in his company. Webster was a bookworm, working on his English literature degree at Harvard.  David wanted more than anything to be a writer; to experience combat first-hand, and then write about it.[7]  He would definitely get what he wished for later on the battlefields of Europe, fighting with his companions in Easy Company from D-Day until the end of the war.

All the officers in the company were young men. At the beginning, First Lieutenant, later Captain Herbert Sobel, was the oldest officer in the company at the age of 28. The rest of the officers in the company were mostly recent graduates of OCS.  Apart from Sobel, the company’s officer chain of command was only twenty-four or younger, including Second Lieutenant Dick Winters.[8]  Winters was the type of officer “who got the men to perform because he expected nothing but the best, and ‘you liked him so much you just hated to let him down.’”[9]  He was one of the best leaders in Easy Company’s chain of command.  Despite their lack of experience and age, the senior commissioned and non-commissioned officers within the Airborne units were a vital key to success on the battlefield and inspired men to perform many acts of bravery for their comrades and their units.

One element giving Airborne units like Easy Company a source of strength to draw on was the grit they developed due to their strict training regimen.  Paratroopers went through some of the toughest training the military could offer a soldier at the time.  This strict training fostered a culture of toughness and obedience.  They constantly conducted physical training to help them survive in combat.

An example of their physical and mental toughness included a record-breaking road march. After the Regimental Commander, Colonel Robert Sink read an article about a Japanese battalion conducting a one hundred-mile road march in seventy-two hours, he determined his men could beat the record.  On 1 December 1942, the 2ndBattalion of the 506thPIR began a road march that would last seventy-five hours. During that time, the soldiers carried all of their gear, including their weapons.  They covered 118 miles in about three days, with only twelve of the 586 men in the battalion failing to make the entire march.[10]  This was one of the many hardships shared by these men. Their tough training gave way to ironclad unit cohesion. Going through crucible moments in training made all the individuals in the group collectively stronger. It also made them develop a greater sense of respect for those leading their outfits.

Most of the soldiers in the Paratroopers thought very highly of their leadership. In a letter to a close friend after their long road march, Sergeant Charles Easter wrote that the officers were of the highest caliber. He commented, “any man in our company would follow them through hell if they asked it.”[11]  But Sergeant Easter, a member of Headquarters Company, 3rdBattalion of the 506thPIR, was a genuine leader himself.

On the eighth of October, 1944, Charles Easter died performing many acts of bravery to protect his squad during an intense firefight.  In a letter home to his mother, Colonel Robert F. Sink wrote that “[y]ou surely must find a great measure of pride in knowing that Charles was a model soldier and parachutist . . . Charles’ leadership, bravery, and devotion to duty . . . set him apart from ordinary soldiers.  On several occasions he saved comrades’ lives at the risk of his own.”[12]  For his gallantry in action, Easter was awarded the Silver Star.  Colonel Sink went on to write that, “His example of courage will remain as an inspiration to our men.”[13]  Valiant men like Sergeant Easter willingly put their lives on the line for Paratroopers who served since the unit’s formation because they knew their buddies would have done the same.

Easy Company was not the exception, but rather the rule for Airborne units.  Their story is stored away in the annals of American history because of Ambrose’s book. However, it is safe to say most Paratroopers serving in an Airborne unit could share similar accounts of acts of bravery and times of great peril, like those accounts from the “Band of Brothers.” In the introduction to Webster’s book, Parachute Infantry, Stephen Ambrose wrote a vivid account describing the bond between paratroopers:

Virtually without exception, they tell me that their closest friends, the men from whom they share their last piece of bread, men they call on the phone when they get drunk on New Year’s Eve, the men they name their children after, are the men with whom they served in the war.  No one could ever envy the combat experience—it is truly hell—but everyone has to envy the comradeship that is unique to the combat experience.  All armies, through the ages, have attempted to create that bonding . . . but few succeeded as well as the paratroop infantry of the U.S. Army in World War II . . .”[14]

The courageous men in the Airborne units volunteered together, sweat together in training, and later starved, froze, fought, bled, and died together on the battlefields of Europe, as well as the Pacific.  Theirs is a story any military organization should strive to replicate and any American should appreciate.  They created a culture of grit, determination, unit cohesion, and built bonds that lasted lifetimes.

Mike grew up in Akron, Ohio. He is an Infantry Officer in the U.S. Army with experience in special operations, counterterrorism, and counterinsurgency operations over twelve deployments to Iraq and Afghanistan, including with the 75th Ranger Regiment. He’s been awarded the Bronze Star Medal with Valor and two Purple Hearts for wounds sustained in combat. He is a graduate of the United States Military Academy at West Point, a Downing Scholar, and holds master’s degrees from both Princeton and Liberty Universities. The views expressed on this website are his own and do not necessarily reflect those of the U.S. Army or DoD.