HomeCultureMilitary“Bowling for America…” in the Philippines 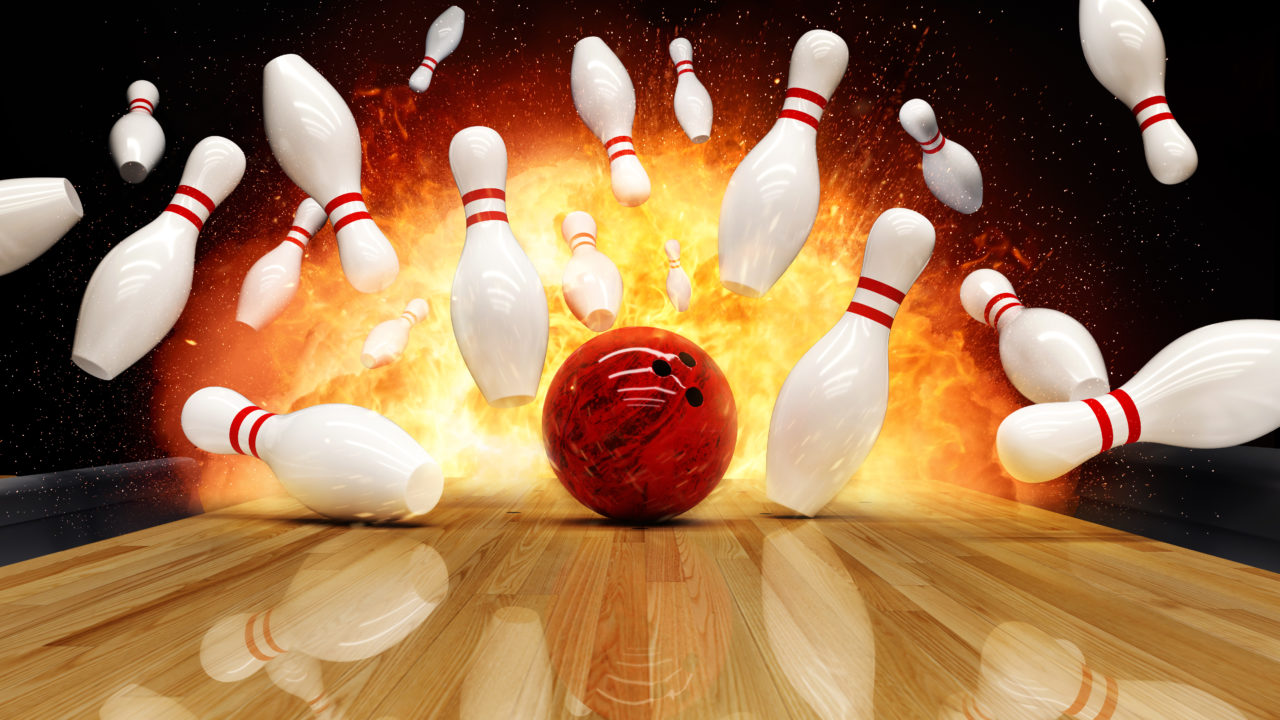 So, when it was all over, China brought nothing. The EU team brought balloons. The Belgians brought cheerleaders. But the Americans brought… home the trophies. U-S-A!!! U-S-A!!!

For a few months in late 2019, I served what is probably my last “deployment” in the U.S. Army. I put the word “deployment” in quotes because the mission involved me living out of a nice hotel in downtown Manila, and wearing civilian clothes to work every day. That was a far cry from the tents, dirt, heat, and incoming rocket fire I was used to in my previous overseas assignments. Our mission was the Joint U.S. Military Assistance Group-Philippines (JUSMAG-P), and this was a legitimate gem of an assignment. The work was meaningful, the conditions were good, and most importantly, the team was excellent. I was one of a group of mostly junior officers from the Army, Navy, and Air Force who had temporary duty as liaison officers in JUSMAG. I arrived as the “new guy” in October of 2019, coming in as an Army lieutenant colonel to a liaison element already consisting of an Army major, two Marine captains, a Marine staff sergeant, an Air Force captain, and two Navy lieutenants. 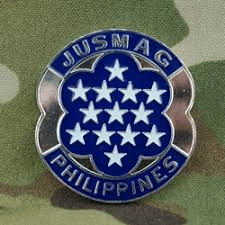 We were part of JUSMAG’s Operations section, augmenting a team of permanent-party officers and under the command of a Marine lieutenant colonel. Soon after I arrived, the Operations Chief retired and the new Chief decided to put me in charge of all of the LNOs. It made sense; I outranked all of them and had more than twice the years of service of most of them. I think that there were some initial misgivings about having another layer of leadership in between the LNOs and the Chief, but that soon evaporated when everyone discovered that I was not there to make their lives harder. The team was close since we all worked in the same large cubicle and lived in the same hotel. We shared meals together, went to the Marine Corps Ball together, hosted the big Army/Navy Game together at the U.S. Embassy, traveled to Corregidor together… and eventually competed together in a big Inter-Embassy Bowling Tournament in downtown Manila. And that’s the story I’m now going to tell.

The Makati Diamond, a luxury hotel in downtown Manila, hosts an inter-embassy bowling tournament at the Mall of Asia a couple of times a year. It is a big production, as they rent out the entire facility for the evening and have a dinner spread as well as drinks the entire evening. In the most recent iteration, participants included teams from Belgium, the Czech Republic, Kuwait, Great Britain, the European Union, Australia, Bangladesh, the U.S., and, of course, China, with many of the embassies fielding multiple teams. The intent of these inter-embassy events is to encourage rapport-building between the different embassies and to promote team building within the individual embassy teams. And of course, it’s also good marketing for the Diamond.

When a rep from the Diamond came by our office to invite us to the bowling event several weeks before it occurred, one of my fellow LNOs asked her who else was participating. I decided at that moment that whoever she said first was going to be our mortal enemies for the purposes of the bowling competition. The first country she said was…

After expressing my universal dislike of Belgium and all things Belgian (much to the surprise of the Makati representative “But, everyone likes Belgium!”), our team then tried to come up with reasons that we didn’t like them. As it turns out, that was somewhat hard to do… because yeah, “Everyone likes Belgium.” The only things we came up with to hate Belgium about were what they did to The Congo and, rather inexplicably, Belgian waffles. I kind of like Belgian waffles but decided to just roll with it. Down with Belgian waffles!!!

Having established Belgium as our enemies, it was decided that anytime something bad or unexpected happened to us in the weeks leading up to the tournament, it was Belgium’s fault. Manila traffic? Yeah, that was on the Belgians. Internet slow in our work area? Yep, that was their fault too. Hot water out at the hotel—again—? “Thanks, Belgium.” 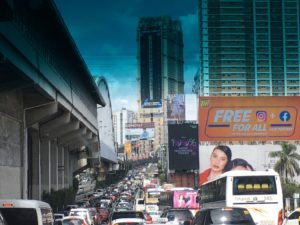 In addition to bad-mouthing Belgium every chance we got, our preparations included sewing unit patches onto the bowling shirts that the Diamond provided us, trying to figure out the transportation arrangements (since none of the LNOs had personal vehicles), and figuring out our smack-talking plans for the actual tournament. Interestingly, the one thing our preparation did not involve was any actual bowling. We talked about getting in some reps at the lanes in the Mega Mall just down the street from our hotel but never managed to make it down there. We were going in cold.

As it turned out, we had quite a few very good bowlers in JUSMAG, although I was not one of them. I like bowling but I’m not very good at it. In fact, if I get over 100 it’s a pretty good game for me. One of our Marines, Staff Sergeant Gogo, was quite good, however. In fact, he won the “best bowler” award at the last bowling tournament the Diamond hosted and was part of the team that won first place overall at that previous event. We had several other good bowlers as well. We were pretty certain that we could put together a solid four-person team for the upcoming Battle Against Belgium.

The idea of being able to compete directly with the Chinese in the tournament was also a big draw. The U.S. and China are at odds throughout the Pacific, and one of the primary ideological battlegrounds is the Philippines. I shot down the idea of wearing Winnie the Pooh or “West Philippine Sea” t-shirts because I didn’t want an international incident—or an actual fistfight—with the Chinese. I mean, I wasn’t trying to turn this into the kumite (or the Kuomintang—heyo!)  but we did decide to bring props. At the golf course on the Philippine Army base where we worked, I found a golf club cover that was shaped like a boxing glove and patterned with the American flag. For intimidation purposes, we also brought the trophy and the individual medals won at the last tournament. Over time, the enthusiasm of being able to take on the Belgians and the Chinese eventually got to the point where I felt it necessary to text out an animated .gif of the “no fighting” scene from Season 3 of Peaky Blinders. 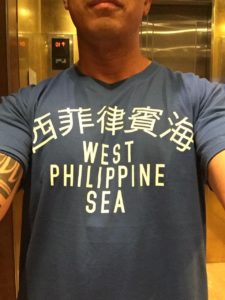 Yep.  That might be a little… provocative.  Photo credit:  Marc Estepa

Eventually, the day of the tournament arrived. We told our driver to drop us off at the Mall of Asia, which as you might expect from the name is quite massive. We had to walk a bit to get to the part of the mall that had the bowling alley, which involved crossing a few streets. The crossing indicators in that part of Manila are very clever. I was used to the static “walking man” that normally only turns from white to red and may blink when you’re running out of time to cross. At the Mall of Asia, they have a digitized walking man whose gait matches the approximate speed you need to cross the street safely. It starts off at a slow stroll, increasing to a brisk walk, and then a trot. Towards the end, the little green man is hauling ass… which is exactly what you need to be doing so you don’t get mowed down by Manila drivers. I thought it was extremely clever, and a little bit funny.

In case you’ve never been to the Mall of Asia in downtown Manila, the place is as huge as the name implies. And they have just about everything. They have at least one gun store, which is something I didn’t really expect to see outside of America. 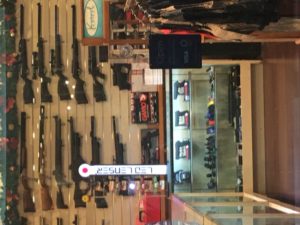 A gun store?? Outside of the U.S.? Well, that’s unexpected.

Ironically, we also had to walk past a Belgian Waffles kiosk in the Mega Mall in order to get to the bowling alley. 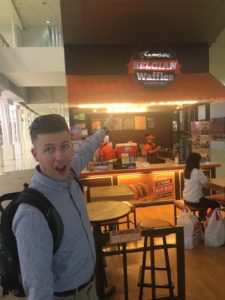 Mall of Asia, why do you hate America?

…and of course, no major mall would be complete without Krispy Kreme. 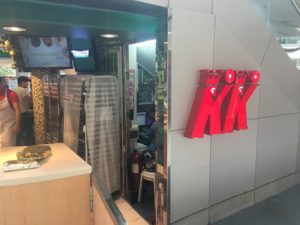 Oh.  That’s just Krispy Kreme.  I mean it’s not like it’s KKK or anything…