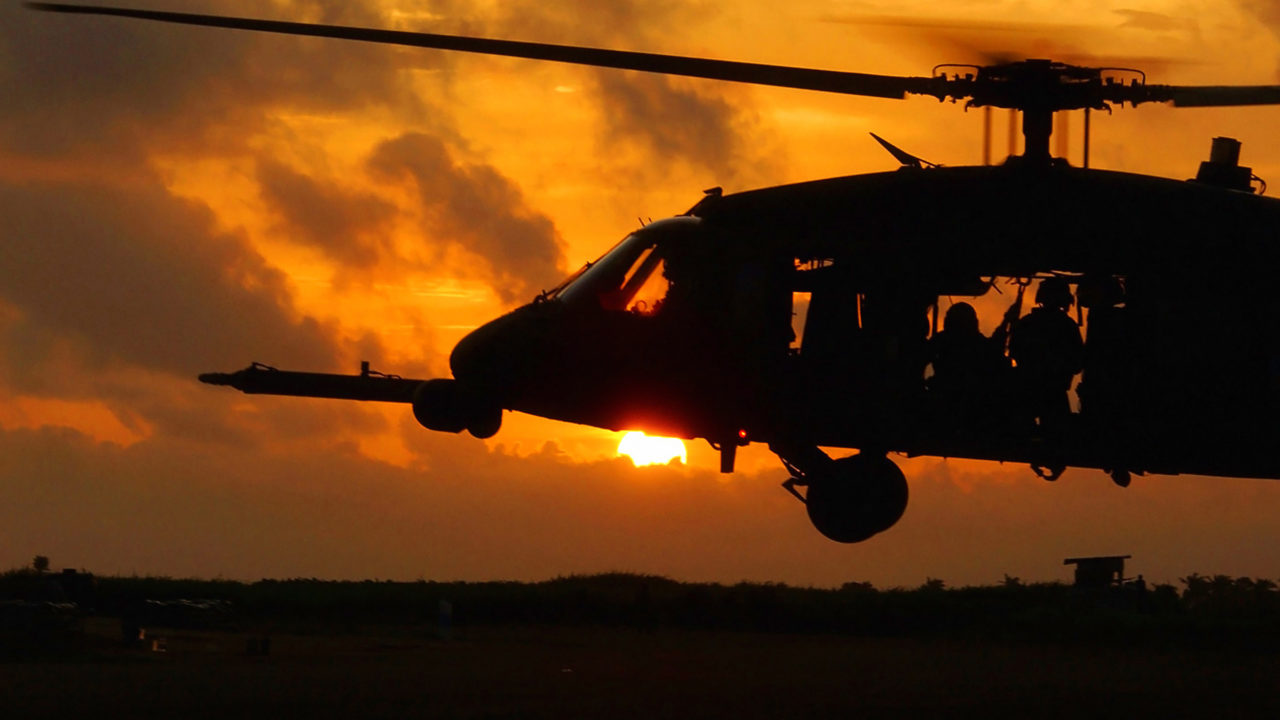 The UH-60 Black Hawk has a hook on the underside of it. That is the helicopter’s primary means for carrying cargo. When I flew Black Hawks, way back when, we could haul some stuff inside the aircraft, but most of the time we had to hang the freight on the hook. The hook was good up to 9000 lbs. I think the most we ever carried was about 7000. That was plenty.

When I was stationed in West Germany, my unit was part of the 3rd Armored Division. We seldom carried troops. That’s what the tanks and APCs were for. Our job was to transport fuel and ammunition. We seldom actually transported ammo (security issues), but we carried lots of jet fuel. Aircraft with turbine engines, such as helicopters, burn through enormous amounts of JP-4. We had to make sure that there was enough during each exercise.

We used the hook on the Black Hawk to transport the equipment that the III/V (Fuel and Ammo) Platoon needed to set up a FAARP (Forward Area Arming and Refueling Point). The pumps and hoses were crated up and placed in a net. The net had a ring on the top that could be placed onto the hook on the helicopter.

We also transported the fuel on the hook. The JP-4 was pumped in fuel blivets, each of which carried 500 gallons. Two blivets were attached together to a sling and the sling was hooked on the bottom of the helicopter. The blivets plus the sling weighed approximately 7000 lbs.

It was sometimes tricky getting the blivets off the ground. 7000 lbs put a heavy strain on the turbine engines. We would face the helicopter into the wind to get extra lift. As far as the Black Hawk was concerned, facing into a headwind was the same as the aircraft moving forward. Forward motion and/or a headwind reduced turbulence under the rotor blades, thus increasing lift.

Even with a headwind, we sucked the guts out of the engines when we first picked up the blivets. The engine strip lights would go from green to yellow, and really close to red. Once the fuel bladders were even a few feet off the ground, we would start moving forward. Any extra lift was welcome.

Full blivets hung under the helicopter like a set of black balls. They were usually steady as stones. Empty fuel blivets, on the other hand, would catch in the wind, and swing and twist. That was disconcerting. It was a pendulum effect. We didn’t want the crew chief to tell us that he could see the blivets from his side window.

There were flight procedures to follow if the blivets were swinging to the point that control of the aircraft was in question. A gradual climb or descent could smooth things out. Or the pilots could go into a gradual turn to stabilize the blivets. In a real crisis, the pilot could hit the emergency release button to open the hook and dump the blivets. It was impossible to hit that release button accidentally. It had to be done on purpose. If a pilot hit the emergency release and dropped blivets with residual JP-4 from an altitude of a couple of thousand feet into the potato field of some German farmer, he better have a good reason for doing so. It was likely that the flight crew would have a meeting with unhappy people of high rank immediately upon landing.

When I went to the 7th Infantry Division, we did a lot more troop movements. The 7th ID was made up of “light fighters,” grunts with little or no ground transportation. We still used the hook on occasion. We lifted 105 Howitzers for the Artillery guys. That was pretty easy. We only had a problem with that once.

A helicopter tends to build up a static electric charge while in flight. The charge is typically released when the aircraft touches the ground. Sometimes the charge is released when the aircraft touches something or somebody on the ground. That can be problematic. The way to avoid grounding the helicopter inadvertently is to key the mike on the radio just prior to landing. That is another way to dissipate the electrical charge.

When an artilleryman tries to hook up his Howitzer to the bottom of the Black Hawk, He straddles the chassis of the gun and holds a ring up to place on the hook. This ring, or donut, is attached to a sling on the Howitzer. The soldier usually wears a gas mask or at least goggles when doing the hookup. The rotor wash from the blades is intense.

We flew in to grab the Howitzer. We saw the gun bunny standing precariously on top of the weapon. He was holding the donut as high up as his arms could reach. We got right over him. Then we heard…

“The troop with the donut is on the ground.”

“He’s moving a little bit. Yeah, he’s getting back up.”

Got to remember to key that mike.