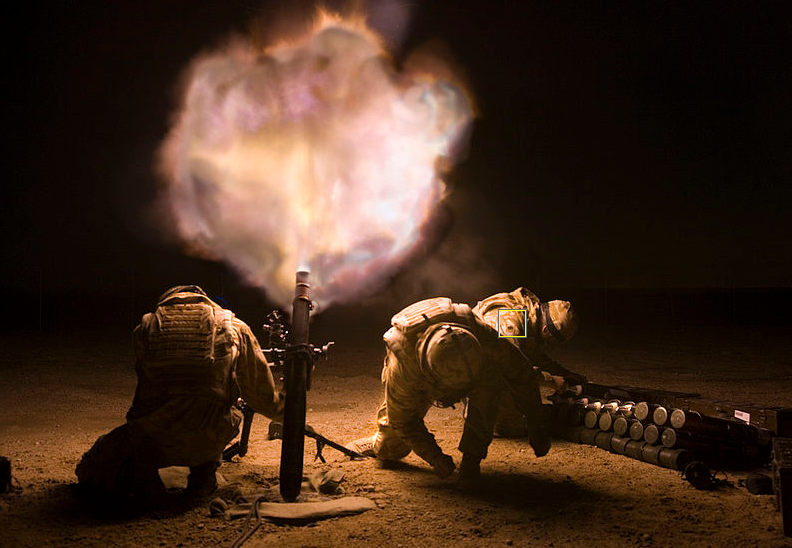 This originally appeared in Vocal.Media as “Desert Meanderings” in May 2021. It is republished here with the author’s permission. Justin is a former UK soldier who served in 3 Bn PWRR.

I can’t remember how many days we’d been out on the ground by this harbour area photo.

This patrol, an Anti-Smuggling Area Deniability Op was around a week in length, and I think this must have been somewhere in the middle. I’d gotten pinged by the boss to be his and the Multiples Signaller, which has its upsides and downsides.

The “up” is that it meant that after only a month in the country I was seen as effectively applying myself to my part-time trade as an Infanteer. The “down” was that it was a dead weight 12-ish kilos with another 5-ish in large clunky batteries. Some of which were throwaways and some rechargeables, which would be swapped out when we RV’d with the Warrior Group. There were about fifteen of us from 2 Pl who had been picked to be the Patrol Dismounts; intel, ground appreciation, marking UXO caches, etc. to the armoured might of three or four Warrior Infantry Fighting Vehicles.

The Warrior is a holdover from the Cold War and the plans were based on sweeping, quick battles and holding actions throughout Germany and into Eastern Europe if it ever came to it. It has a crew of Commander, Gunner, and Driver. Typically the commander will be the OC, a Sgt, or a Cpl, but it’s certainly not unheard of for a senior Tom (Private) to take command when the men in command have taken rounds or been hit by blast or shrapnel.

I’d been in Iraq since early December, and as a chosen multiple of 2 Plt (Platoon), had gone ahead of the rest of 2 Plt as well as A Company 1 PWRR as a whole. We’d flown via charter jet from Germany to one of the Gulf states, and from there to Kuwait. The base was my first taste of how the U.S. goes to war. It takes everything from home and encamps it from the ground up in some very hostile environments. It set the scene for what would become 20 years of operations in the Middle East and around the globe.

Kuwait was the 3-week in-country course, teaching us the skills specific to that theatre of operations. It included basic admin tasks such as zeroing weapon systems and also our issued weapon-mounted night sights. I’d been issued my L85A2 (SA80) personal weapon from the Reserves Mobilisation and Training Centre Nottingham. This was the base that tens of thousands of citizen soldiers would pass through on their two-week preparation course before being sent to regular units operating in eighty countries around the world.

The course was, and still is, designed to take reserve soldiers whose minimum training requirement is never really enough, through the basic skills necessary to do their individual jobs. This ranges from clerks and drivers, to infantry and the reserve components of Britain’s special forces.

We ran our BFTs, and tabbed our CFT (ran and ruck marched), before attending lectures on minefield extraction, battlefield casualty care, and then shooting our Annual Personal Weapons Test. Which for those of us joining line infantry units the test consisted of firing 65 rounds of 5.56 NATO at various targets out to 400m.

We then proceeded to dress to the firing line in sections of maybe 8 troops and went through the course of fire. Some targets were held in place at a hundred metres. These were used for zeroing our rifles and confirming that the zero was true and then there were falling plates at 200m, 300m and then Infantry shot out to 400m. I scored 62 of 65 shots as I should have. I’d been shooting for 23 years by that point from Airguns and Shotguns to Centerfire Rifles and Machine Guns.

Different parts of the Army have different requirements for marksmanship. An RLC Driver is expected to be able to shoot well, but not to the same level as an Infantry Tom for example. My unit was The Princess of Wales Royal Regiment, the oldest line regiment in the British Army. It is a distilled essence of every regiment that has been annihilated in wars past and then reformed and amalgamated over centuries. By 2008 it had evolved into 3 Battalions, deployed and fighting in some of the most intense, stressful, and hostile environments the British Army has ever operated in.

The number of awards for valour in the face of the enemy that the regiment can lay claim to is staggering, with men such as C/Sgt Johnson Beharry who was awarded the Victoria Cross (VC). The VC is an award generally awarded to corpses more times than not in our Army. The rules laid down for the VC are such that a soldier must have walked hand in hand with death on more than one occasion.

By the time I joined in 2007, the regiment was deployed to Germany, Cyprus, Iraq, Afghan, and a load of other places. I was from D Coy in Portsmouth, a unit which although reserve had a solid core of SNCOs and Section Commanders who had been deployed with our parent units on multiple combat tours. Some of which were to N.Ireland and Kosovo, Cyprus on UN peacekeeping missions, and then the 360° environment riddled with the most learned bomb makers the world has ever seen.

D Company was led by Major Hall and Company Sergeant Major Eastman, who had both served in the regulars before discharging, missing it, and then joining the reserves for their fix of green kit. Both the O/C and the CSM had seen multiple deployments and were experienced soldiers with the O/C having been in the Parachute Regiment.

The 3rd Battalion, the reserve play at weekends. Soldiers of the civilian section of PWRR are spread out around the South and South East England including London as well, so the regiment is an absolute melting pot of men. Sorry ladies, at the time the rules were different and although plenty of female soldiers got shot, IED’d, claymored, crushed under vehicles, etc… they weren’t allowed to serve in a front line unit at that time.

Yes, I know that’s bloody stupid, and yes, I also know that women -and children in times of total war- have fought in wars for centuries. Those policies have now been replaced. Whether the new policies are 100 percent correct I can’t say.

I stepped off the green kit bus twelve years ago now and while I’ve kept up to date with what’s going on broadly, that’s not equivalent to training with the lads through hundreds, thousands of hours and rounds down range and being briefed up on what’s actually going on within the Army. Now, that’s not to say that guys I served with through all those freezing, soaked weekends at Longmoor or Salisbury Plain don’t tell me what’s going on at their level of the chain of command and in their specific section of the Military.

Civilians tend to forget that the most battle-hardened Sergeant Major, who’s led and fought and bled through more harrowing and horrific things than they could ever imagine, is still a human. He’s got a wife who’s cheating on him and won’t let him see the kids because he’s got undiagnosed PTSD or other personality disorders such as my constant companion BPD, and kicks off when he’s had a few.

His body and brain are reacting to memories and experiences of trauma formed over a long period of time, or in one nanosecond of “click” and you wake up ten metres away missing vital parts of your anatomy.

No one, absolutely no one, spends literal years of their lives, without being affected by some highly hostile environments where just living day-to-day is hard. Let alone when you’re lugging around a large percentage of your body weight; where absolutely every person you come into contact with can turn and clack off a daisy chain of 105s, killing themselves and the entire section if the lads haven’t bothered with their spacings.

I don’t know whether the wars of the last 20 years were justified or not, really I don’t. I went to Iraq expecting to get a better idea and came home more confused as I saw instantly that there aren’t any happy endings in most parts of the world. It’s hard, vicious, and dog-eat-dog.

Now, that doesn’t mean there aren’t amazing, kind, hospitable people. In my experience of thirty or so countries (mostly as a civilian), most men and women want largely similar things the world around. They want safety and prosperity for their kids and a warm home in which they feel safe.

However, in the countries we’ve been deployed to and engaged in the most intense battles, the regime was one of despotic terror at all times, certainly in Saddam’s case. There were multiple basements and murder/torture rooms spread over the whole of Iraq and Uday Hussein’s favourite pastime was to invade wedding parties and in front of the groom would rape, torture, and mutilate the young newlywed woman. The two now traumatised people would often kill themselves from the trauma and shame.

So you tell me, a justified occupation that turned into an absolute cluster fuck really quickly or illegal war that showed the world what was actually going on and that we should have stopped it years ago?

We left the UK from Chilwell and flew on a civilian plane in uniform; our weapons wrapped in sandbags and bin liners traveling in the hold. A bus journey late at night saw us deposited at Barker Barracks, Paderborn, Germany end of September, and beginning of October. We spent 2 months training before having ten days pre-deployment leave where I was due to meet the woman I’d started chatting to on a forces dating site.

In the next 8 months, we spent three weeks together, got engaged on my R&R, and she would almost kill me in a shitty little Fiat Punto on a graveled road in the Hebrides. Which while beautiful, leaves a lot to be desired for my tastes when she hit the brakes on the newly scattered gravel. Singleish track roads, and builders’ vans going too fast, coupled with blind dips and rolls in the roads don’t make a good combination of events when you’ve only passed your test a few months before.

Trace learned really fast why you don’t brake on gravel if you like straight lines. Got rid of the shitty Punto though…..so that’s a win right?

This first appeared in The Havok Journal on September 7, 2021.

Justin Haywood is a former 3 Bn PWRR and is now a writer, journalist, and digital marketer for The Veterans Community Hub in Newton Ayliffe, County Durham, UK.