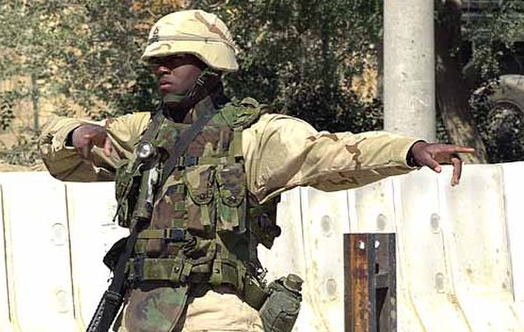 This originally appeared in Dave’s blog on March 19, 2012. It is republished here with the author’s permission.

It has been many years now, but I still get asked what Afghanistan was like. And I still don’t have a good quick answer, usually mumbling something to the effect of “I learned a lot.” One of those pearls of wisdom I did learn is spelled out here.

My engineer team of six officers was armed only with pistols. This sounded like a dandy idea back at Ft. Carson as we were preparing to mobilize and go downrange to be basecamp engineers, essentially functioning as a public works department. The technical term for that type of role is “REMF” for Rear Echelon Mother… you can fill in the rest. But after arriving in country, we promptly found ourselves working directly in the task force that was training and mentoring the Afghans and going outside the wire on a regular basis. I was on the ground exactly four days before going on my first foot patrol with a squad from the 10th Mountain Infantry Division. That was all fine, we were anxious to do any job needed of us and this whole theater seemed desperately short of engineer assets. But wandering around the backstreets of Afghanistan armed only with a 9mm and rapier wit does not instill one with much confidence.

For most of those trips and convoys, I was able to borrow a rifle or shotgun from the infantry units. But there wasn’t a stockpile of extra U.S. weapons from which to “sign out” and keep one as my own for the duration of the tour. If you think back to 2003, our Afghanistan War was fast becoming a sideshow to the Iraq War. There were, however, more AK-47s around than you could shake a stick at! I should qualify…they weren’t lying around. They were oiled and stored neatly inside arms rooms waiting for the Afghan National Army, or ANA to fill its ranks with recruits. At the time, Afghanistan had much more military equipment (much of it donated from former Eastern Bloc nations) than it had soldiers to handle it.

Given all of that, we frequently discussed simply signing out a few AK’s from the Afghans so we’d have more long rifles at our disposal. The downside to this was that we would get many strange looks and even questions from higher up our own chain of command about using foreign weapons. But, as the SIGACTS (noisy run-ins with bad guys) started to grow more frequent, we opted to err on the side of common sense.

I grew familiar with quite a few Afghan officers and their western counterparts. I got in touch with the U.S. officer who was mentoring the ANA supply officer and set up a meeting to sign out a couple of AKs. We met up that week, the smiling ANA officer was happy to oblige.  I returned back to my team with two nice Romanian AK-47s, magazines, ammo, and even a hand-receipt complete with Dari serial number!

Debate if you want the rightness or wrongness of this whole exercise and how well we were equipping our own troops for the mission at hand in 2003. That debate did rage for a while and is still worth discussion, but it is not the point of my story. If it was, I’d write at length what I learned about the finer points of duct-taping old flak jackets to the interior of an un-armored vehicle.  I’ll save all that for another story.

Those AK’s did work well, I hung onto mine for the last half of my tour. It did get me some strange looks and a few questions. But the longer one stays on the ground in a combat zone, the less one cares about rules that serve absolutely no purpose.

The author stands in a poppy field outside Kandahar with the Civil Affairs team to which he was assigned.

Fast-forward to the end of my tour.  I had transferred back to Kabul from the boondocks where I had been assigned in early 2004. The last week in country is typically a lot of cross-training with newer soldiers, paperwork, and wrapping up loose ends. At three days left before going home, I tagged along on a convoy up to Bagram to schedule my travel home. Early in the afternoon, our Bagram business was complete, and we prepared the people and vehicles for the convoy back to Kabul.

Rolling down Bagram road, I was riding shotgun in our SUV while coaching the new-in-country driver on the finer points of driving in a third-world combat zone. We equated it to bumper cars with guns. Apparently, my coaching left something to be desired because one second I was warning the guy to look out for an oncoming truck…the next thing I remember was sitting up in the Bagram ICU with the doctor sewing up my face.

About three hours, one nasty motor vehicle accident and my eventual medevac had passed. My side of the SUV took the brunt of the T-bone collision with the loaded gravel truck. The vehicle’s side was caved in and the others’ initial reaction was that I must be dead or severely crunched up with the truck. It was a true miracle I only received the few holes and dents that I did. Had the impact gone an inch differently, either way, I’d surely be dead.

As it was, the bottom of the rig was crushed to a point where I had about a 10-inch diameter void for both my legs. Inside that space was also my AK-47…broken into several pieces!  Interestingly, about a week after the wreck, a forearm bruise that reflected the exact pattern of the bottom plate of the AK’s magazine showed up.  Weird.

That event set back my out-processing a bit as I spent a little unplanned time in the Bagram ICU. After getting out the next afternoon complete with stitches and a cocktail of pain killers, I had to get back on the paperwork wagon.

One cardinal rule in the Army is equipment accountability. If you sign something out, you by-God had better sign it back in or Uncle Sam will find you. This train of thought brought me to the two AK-47s under my name. In retrospect, I probably could have just handed them off to my U.S. colleagues at the base and ripped up my Afghani hand-receipt. But, that officer mindset has a way of being hardwired into a Captain’s brain. Rules are rules but moreover, it was important to me to not miss an opportunity for a teaching moment to hammer home that cardinal rule for one of these Afghans. So we found a couple of hours to get back to their base in order to turn in those two weapons.

We found the ANA supply building arms room and explained our plight through our interpreter. Since this whole situation was a little outside the box, even for the ANA, the Afghan sergeant went to go fetch the officer in charge of supply. I was getting a little nervous about the fact that one of the AKs was broken beyond repair. I had valid circumstances, but if it had been a U.S. rifle, I would be looking at a very long line of explanations and paperwork just to ensure the cost of the weapon would not be coming out of my paycheck. I was hoping the Afghan that we found would still be green enough to hold common sense in high regard and that their own system was still undeveloped enough to just write off broken equipment.

It apparently took a while to find the right guy and we loitered around in the ANA main supply area. After about ten minutes, a couple more senior ANA officers came through the door and looked us over.

I should probably mention that, at this point, I looked like warmed-over death. I was a couple of days out of an amnesiac concussion, loaded with Percocet, had a faceful of stitches over a huge black eye, and I wasn’t moving very fast with broken ribs.

The interpreter spelled out the story to the ANA major. He seemed to brush off the interpreter and I thought “Oh boy, here it comes.  One too many of our anal-retentive-supply-types have probably mentored this guy and he’s going to seize the opportunity to chew on an American.” Dealing both with the ANA and contractors, I had more than my share of arguments with Afghans of varying levels of hostility and was hoping to get home without any more.

I laid out the weapons for him, broken bits and all, and apologized while explaining in small words that they had been through a wreck. But it turned out this guy did have a pretty good command of English after all.

He looked me in the eye, gave me a big hug, and said “Praise Allah you are OK. These rifles are nothing. Your life is everything. Thank you for helping my country.”

It was probably all the Percocet, but that choked me up. Getting an unsolicited bear hug from a big bearded Afghan tends to throw a guy off. It was me on the receiving end of that teaching moment. This drove home something I was still coming to believe after working, training, and living with many Afghans over the past year. These people are in fact human. They have lives. They are not just faces on a TV news clip. They have hopes, dreams, and worries. Most have concern for other people, even strangers.

This war, like all wars, will end someday. As we get closer to that end and weary of each other’s failings, I hope and pray both we and the Afghans keep in mind the fact that the foreigners are human.

Geographic location, religion, or nationality should not be the sole reason we judge people of any flavor. Prejudging people with hate or even bitterness is often the easiest route to take.  I like to think we’re all better than that.