HomeCultureMilitaryA Marine in the Making 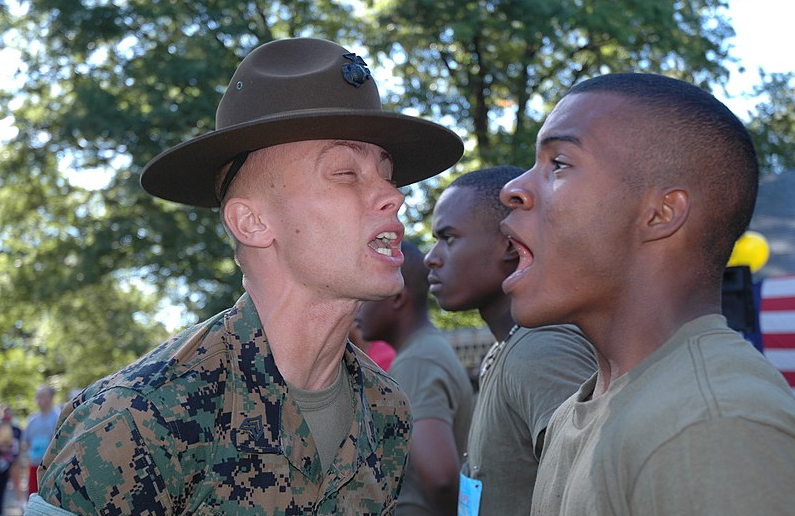 This first appeared in Frank’s blog on October 2, 2020, as “Marine.” It is republished here with the author’s permission.

“He said son, have you seen the world?
Well, what would you say if I said that you could
Just carry this gun, you’ll even get paid
I said that sounds pretty good

There is a family at the end of the street who I barely know. They have lived in the corner house for years, but I never connected with them. We would wave to each other on occasion, but I seldom talked with them. They put a sign up in their front yard at the end of the school year to announce that their son was part of the graduating class at Oak Creek High School. A lot of people had signs like that this year, seeing as the pandemic prevented the school from having a physical graduation ceremony.

Then, about two weeks ago, they put up another sign in their year. This one said: “I’ve Got a Marine in the Making”

A few days ago, I was walking past their house. I saw Phil and Mary sitting in front of their garage. I stopped to say hello. My greeting started a long and challenging discussion.

Phil and Mary told me that their son, Dylan, had joined the Marines and that he was currently in boot camp in San Diego. They are both proud and worried. Phil was never in the military, but he has relatives who were. Phil and Mary came of age just before 9/11, so Phil would have been involved in the very beginning of the War on Terror if he had decided to enlist when he was Dylan’s age. He and Mary have friends and family that did enlist, so they have some idea of what can happen once a young person signs up.

I told them that I had been in the military for ten years (1976-1986) I was four years at West Point, and then served six years as an Army officer/helicopter pilot. I also told them about our oldest son, Hans, who joined up in 2009. He went to Armor school and then went to Fort Hood, Texas.

I explained to Phil and Mary that I had lucked out. I had been stationed in what was then West Germany from the end of 1981 until early 1985. I served there for three years at the height of the Cold War. Nothing bad happened, although I expected that every day would the day that we would have to fight the Soviets. While I was in Germany, there was always a sense of dread. It was always “eat, drink, and be merry, for tomorrow we die.” But I got home okay.

Hans was not so lucky. He went with 1st Cav to Iraq. He got shot, and he killed people. He stabbed a guy to death. When Hans was deployed, bad things did happen. The effects of those bad experiences still echo in his life. Hans is damaged; in soul, mind, and body.

I tried to explain to Phil and Mary that Dylan will come back to them differently. I think that they understand that intellectually, but they won’t grasp that idea fully until Dylan comes home and they realize that a stranger is standing in their living room. I made it clear to them that they were not getting their little boy back. That kid is gone.

I remember the times when I came home on leave. My father would be alternately proud of me (I gave him bragging rights at the local tavern) or infuriated with me. He would get angry when I went out with my buddies and came home good and hammered. Somehow, my dad had forgotten what he was like when he was in the Navy back in the ’50s. One morning after I went out carousing, he raged at me:

“I thought they were going to make you an officer and a gentleman!”

They made me an officer. A gentleman, not so much.

It was the same when Hans came home to visit us. He was a changed man. He was a little crazy. Hans lost his faith while he was in Iraq. He couldn’t square what he had experienced in the war with the notion of an all-loving God. Hans was much more mature than he was before he enlisted. Maybe he got old too soon. Hans told me that he had to grow up quickly in Iraq. I believe him.

Phil and Mary told me that Dylan had just finished “swim week.” I didn’t ask them what that all entailed, but I can easily imagine what it was like. When I was a plebe at West Point, 44 years ago, I had to take “survival swimming.” It was a mandatory class. We learned how to swim while wearing fatigues and boots, and while we were weighed down with a backpack and a rifle. I spent a lot of time underwater. On the last day of class, each of us had to jump from the diving platform. The platform was ten meters high, and the pool was eighteen feet deep. It was like jumping off of Mount Everest into the ocean. I’m sure that Dylan got to enjoy a similar experience.

Mary and Phil also told me that Dylan was going to start rifle week in boot camp. I remember doing that sort of thing too. Back in 1976, the Army taught me how to shoot an M-16. I can still smell the acrid gunpowder smoke, and I can hear the tinkle of the hot brass shell casings falling to the ground. Shooting was fun, even though the Army did its best to make it a pain in the ass.

Phil told me that Dylan needed structure. He would have been lost in college. Phil is probably right. He knows Dylan and I don’t. The Marines will definitely provide structure for that young man.

I asked Phil and Mary if I could write snail mail letters to Dylan. They gave me his address. I wrote to him two days ago. He might write back. I don’t know.

Why did Dylan join the Marines? His parents don’t know. Odds are good that even Dylan doesn’t know. He just did it. He made an enormous, life-changing commitment. He signed a blank check and made it out to the United States of America. He swore to defend and uphold the U.S. Constitution, with his life if necessary.