HomeCultureMilitary3,000 Days in Afghanistan: Fighting Instability, Narcotics, and Poverty in a Dangerous Place 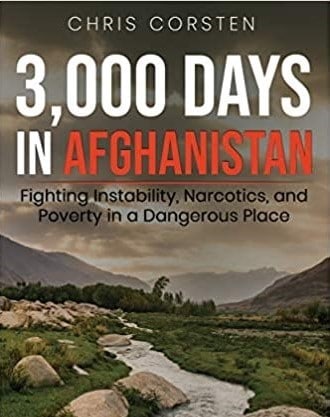 Prior to reading further, a disclaimer must be made. I know Chris Corsten, the author of 3,000 Days in Afghanistan: Fighting Instability, Narcotics, and Poverty in a Dangerous Place.

Chris Corsten is a genuine man who worked tirelessly in Afghanistan amongst some of the most brilliant persons I ever met. His book brings back many memories—some good and some not so good. It is a book that I wish would have been published years ago.

3,000 Days in Afghanistan: Fighting Instability, Narcotics, and Poverty in a Dangerous Place reads like a diary.

Sub-chapters are broken down into 1-2 pages making the book an incredibly easy and fast read. I believe Chris was being very nice in some of the chapters/sub-chapters—specifically regarding key individuals or organizations. But that is Chris—one of the truly nice guys.

In his book, he reveals a lot of good but also divulges plenty of bad.

It is apparent he was deliberate in what he chose to put in writing. I am grateful for his calculated efforts because knowingly or unknowingly, Chris was a part of something much bigger than himself with at least a portion of his time spent in Afghanistan.

Few have spent the amount of time in country, especially outside the wire, as Chris.

He obtained unique observations of the war effort through his past wearing a military uniform, then later as a contractor for a unique program within the U.S. State Department. He worked closely with military units, government entities, and NGOs as well as local politicians from all levels of the Afghan Government.

To say Chris Corsten is a wealth of knowledge about the war efforts in Afghanistan is an understatement.

Several books have been written about the War on Terror and specifically about the war in Afghanistan. But to date, I have yet to read a book as complete as 3,000 Days in Afghanistan: Fighting Instability, Narcotics, and Poverty in a Dangerous Place.

If you truly wish to know insights regarding why the war was a complete quagmire, this book helps fill the gaps to bring about such insight.

At times, readers will likely laugh hysterically at some of his adventures in country. There are surely times readers will be outraged. And depending upon one’s emotional state, readers may even find themselves wiping a tearful eye.

3,000 Days in Afghanistan: Fighting Instability, Narcotics, and Poverty in a Dangerous Place is a book about a war very few ever experienced through the discerning lens of someone like Chris Corsten. The unique nature of the work Chris had the privilege to fulfill as a military member and as a civilian alike is fascinating. Some may see his work as a slap in the face, refusing to accept the other sides of reality he observed. Others may find it refreshingly honest.

3,000 Days in Afghanistan: Fighting Instability, Narcotics, and Poverty in a Dangerous Place can be purchased at Amazon.