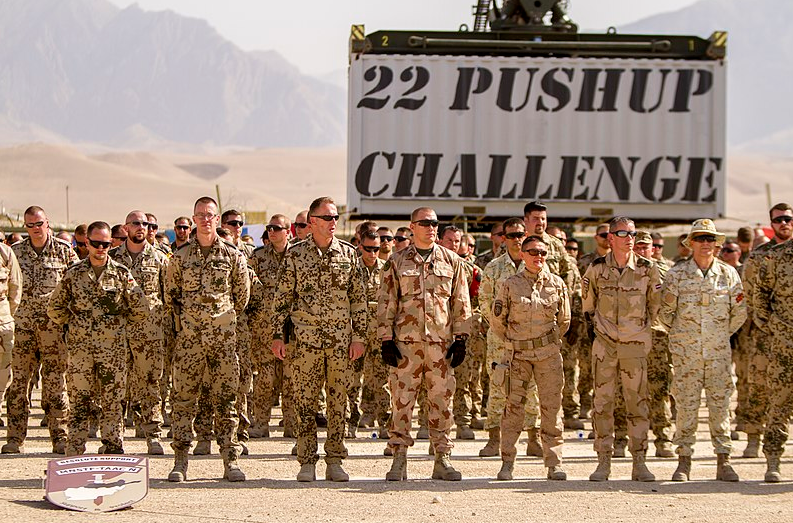 This first appeared in Darren’s blog on February 26, 2021. It is republished here with the author’s permission.

This article has been the hardest to decide to write. There is so much behind it emotionally for everyone; for parents of those who chose this action, comrades of the self-life takers, for those who would contemplate such an action, for those who want to prevent it. Look, there is no way this can be an easy discussion. And because of that, we choose not to have it. It is like a car accident beside the road. We want to look. We take a peek. But we don’t tell anyone we peeked. It is time to openly take a peek. But we have to look at the real problem and the real solutions and stop with silly slogans. Open kimono, my best friend took his own life and I have been to the dark places we don’t talk about. If we are going to have an honest discussion, then it must begin with honesty.

So, here we are. We know the rhetoric; 22 Warriors a day take their own lives. Well, that’s not accurate. According to the 2020 VA Annual Report, on average 17.6 Warriors take their own life every day. And don’t ask me how .6 Warriors take their life. It’s an average ok? Why is this important? Isn’t one life too many? Yes. One life lost or taken is too many. But if we are going to have an honest discussion with the chance of identifying the problem, and coming up with a solution, then we have to start with facts. Not a slogan, not a cool T-shirt saying that raises money, not the alliterative name of a nonprofit. That crap is for politicians. If we are going to talk about this honestly, then let’s talk about this honestly.

If we continue to talk with wrong numbers because we chose to name a fundraising goal or organization after it, we are slapping the truth in the face. We are taking away the individuality of those who chose this path by simply making them a cool slogan or the backside of a challenge coin. To the parents, spouses, and children of victims of suicide we are saying they don’t matter, they are just part of some group that made a bad decision. Let’s look further at the numbers.

There are approximately 20 million US Veterans alive today. That is approximately 6% of the US adult population. Yet, approximately 14% of the 127 people who commit suicide are Warriors. When you adjust the study for age and sex to normalize it, the numbers are about 1.5 times that of civilians. But, these numbers are also a bit deceiving as the annual rate for our Warriors has mostly stayed the same over our longest wars, going up a few percent while the civilian population, not having gone to war, has skyrocketed almost 50%.

While we consistently, in our rhetoric to sell t-shirts, talk of how PTSD in our Warriors is causing their suicides, this indicates it is not a primary or even probable associated factor. In fact, over 50% of those who took their lives while actively serving had never deployed. In fact, most were first-termers, young and male. Nearly 1000 more Warriors who took their life that were National Guard members never having been Federally activated, hence no combat, hence no combat-related PTSD. PTSD from Military Sexual Trauma is still a possibility regardless of deployment. But the VA does not classify them as Veterans. So, is combat-related PTSD the reason for the predominance of suicides? I don’t think so, Carl.

Ok, we know that Warriors get beat up physically over their years in service. So, their injuries must be the cause? Well, not so fast there high-speed. Actually, Warriors who had service-connected disabilities and get treatment at the VA seem to have had a lower rate. And while chronic injuries (e.g. TBI) with habitual medication use without resolution can be a large factor as hope for recovery is lost, it is still not the answer. Studies have shown that isolation is likely the biggest key in Warrior suicide.

Older, divorced, males are the highest age demographic. You know that old, grumpy, 50-something, divorced, Clint Eastwood get off my lawn-acting neighbor? Yeah, he is in danger. Older Veterans, isolated and with mental health issues are a high number. For younger troops, it is likely failure to adapt to a new world as they join Chapter 2 of their life and fear what they don’t know about combat. For those in Chapter 3, it’s younger troops who don’t readjust well. I have long thought that most of this issue was an issue of adapting. Let’s be clear about what the SGM just said. I said the difficulty in adapting. I didn’t say anyone was weak-minded or just “couldn’t get over it” or anything like it. I am saying we are failing to adapt to the new life and ruining others’ lives by taking our own.

Mental health issues in America have gone up over the last years, which can explain why some of our younger Warriors are having issues both in Chapter 2 and Chapter 3. Early studies showed that those who had pre-existing mental health issues were more likely to have a compounded problem down the military road so are now excluded from military service, generally. Today’s youth are simply different (insert “ok boomer” here). I’m not saying they are good, bad, better, worse, just different. Raised differently in a different world of not needing to cope with other humans behind their Facespace or Twitgram. Problem to solve? Ask Alexa. Don’t know an answer. Ask Google. And older Warriors isolated from the family in a world they don’t understand, with mental health issues of their own, compounded by age, simply lose faith.

So, where does all this lead? What is the path forward? The path forward is to stop lying to ourselves, lying to the public, and lying to our Warriors about what the real problem is and how we can fix it. First, let’s follow this simple, but accurate, path. Pre-existing mental health conditions lead to poor adaption in Chapter 3, leading to poor social interaction, leading to economic disparity, leading to homelessness, leading to a bad ending. The path may get shortened anywhere along the way, unfortunately, due to the severity of any of those conditions, specifically mental illness. A lot of that can be alleviated through teaching our Warriors how to adapt to Chapter 3 better.

As I have stated on many occasions, our military’s inability to transition our men and women properly is largely at fault for their woes and even their suicides. Teach a Warrior how to adapt to Chapter 3, giving them ample time to determine a path forward, with experts in social interaction not just resume writers, and they will do better. Just because they can adapt to stressful situations like combat doesn’t mean they can adjust to the stress of working with people they feel aren’t as qualified as them or dealing with “whiners” and “oxygen thieves.” It is simply not the same.

We must transition our Warriors to properly integrate with the pillars of life: family, fun, faith, friendships, employment, and community. We must help the Warrior understand that his life is going to change dramatically. His relationships with his spouse, parents, and siblings have changed. In my article Why God Doesn’t Love the Infantry Anymore, I talk about the need to work on relationships. Relationships provide social integration, directly and indirectly. Directly, it is contact with another human with common goals, someone we trust, someone who trusts us, someone we need, someone who needs us. Sound familiar? Indirectly, they bring other parts of our pillars along with them. Other friends, other likes in the community, etc. When we have a relationship with our spouse and children, it is also more likely will work harder to maintain employment.

Employment gives us purpose, brain stimulation, and another set of possible friends with possible similarities of hobbies. Having this job, with new friends brings us further into different parts of the community. And lastly, these relationships with our spouses and children help give us faith. Faith in love, Faith in hope, Faith in a higher power. Faith in a higher power also gives us more access to more of the community and more friends.

So, the bottom line, in my humblest of opinions, with some pretty solid facts behind it, is that we need to address suicide at its root. Its root is not wholly nor heavily from combat-related PTSD. It is from our inability to adapt to Chapter 3. So, while it’s great that you offer free fly-fishing trips to Veterans with PTSD, it is more important that you offer these opportunities to ALL Veterans. And while the VA will not solve all your problems, no health system in and of itself will, facts show that getting treatment lowers your risk of suicide.

So, just go. Will you get poor treatment? Maybe. But hey, I have TRICARE and use the Military Treatment Facility and I get crappy treatment every now and then as well. Change Dr’s, get a second opinion, etc. And finally, keep working on the pillars of life, which are important here to reiterate. Family, fun, faith, friendships, employment, and community. Let’s transition and live!

Darren is a 2nd generation US Army retired Sergeant Major; was the founder and President of the Warrior Thunder Foundation, a Veteran nonprofit; developed combat equipment as a DoD civilian for 9 years, and now works for a consulting company that helps the Army modernize its equipment through the use of small and Service-Disabled Veteran-owned businesses as well as companies that employ people with disabilities. He writes a blog that can be found at www.warriorchapters.com