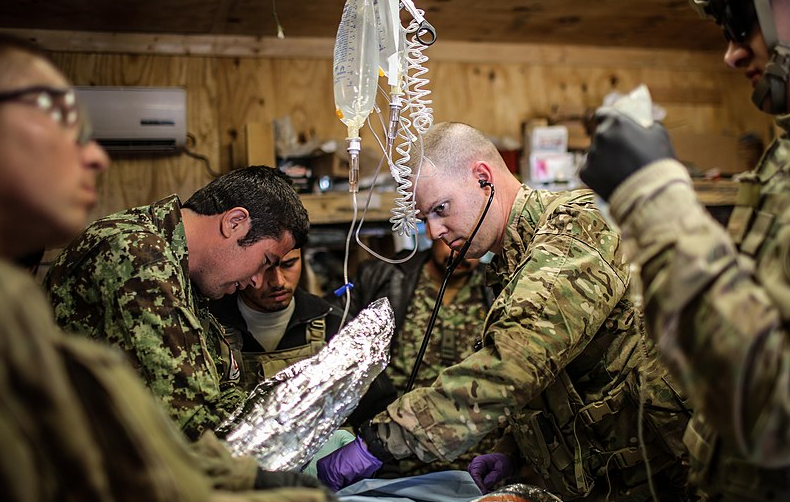 Some of the most valuable objects I own are worth pennies.

A U.S. flag patch that is worn on the edges, a sign of allegiance to the country that sent patriots to war.

An old BDU name tape from a time long past, how we identify those we don’t know, yet we stand shoulder to shoulder and will immediately die for them in battle.

A laminated paper casualty card filled out with a name and blood type, maybe he learned it from the medical training completed years earlier.

A call sign that was vital during the enduring night raid that we have become known for in these wars, but he was shot and died during the daytime.

Chances are, they would not mean much to anyone else except my brothers in arms. Yet to me, they represent lives lost, and not just any life, they are the lives of the Rangers who died under my care.

They are the ones who, no matter the effort, died. Not just dying, but dying in combat, far away from home. Away from their wives, children, parents, and siblings. Some cried out as they took their last breaths, others too wounded to be aware they were slipping away from this world.

However, they did not die without family, because we are their brothers. We were there in their final moments.

We put our own lives on the line for them. We fought to save their lives, fully accepting the dangers we feared.

When we couldn’t, we were there to usher them home. We honor their sacrifice and service.

I keep these items as a reminder of the cost of war. I keep them as a reminder to make myself better, to find ways to bring more of my brothers home alive, no matter the wounds they may carry.

Andrew is a 2020 graduate from Texas A&M College of Medicine after serving many years as a physician assistant with the U.S. Army. He is currently completing a general surgery internship. He is the co-creator of the Ranger O LOw (ROLO) titer whole blood program that is now utilized throughout the Department of Defense. He is a member of the Committee on Tactical Combat Casualty Care and Stop the Bleed Education Consortium. Additionally, he is the assistant director for the Resuscitation Adjuncts: Prehospital Transfusion & REBOA course and on the Board of Directors for Global Response Management.