HomeCultureLifeHow the 75th Ranger Regiment Taught Me to Dance 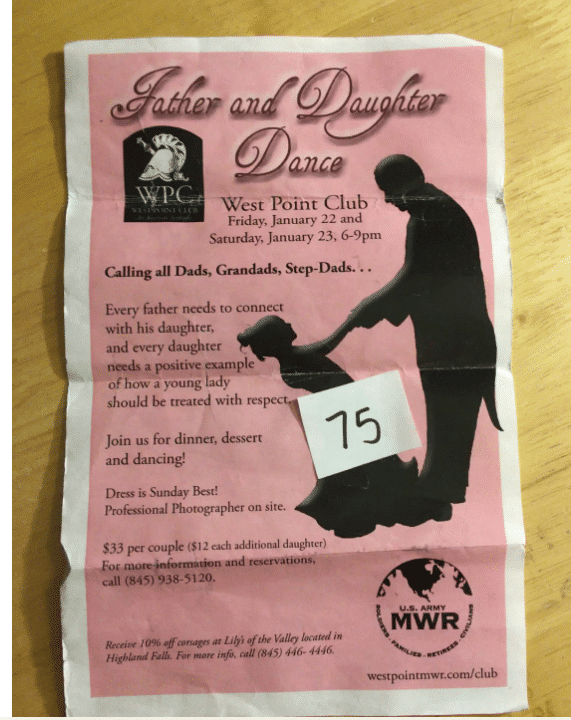 My skills are few and my faults are many, and as a large (6’5”, 280#), awkward, middle-aged man, one thing I am particularly not adept at is dancing. Going all the way back to high school, I’ve had an aversion to dancing, and pretty much any public displays of exuberance or emotion, partly due to my upbringing but mainly because of a heightened sense of self-consciousness and an overly developed sense of needing to maintain “professionalism.” I also can’t sing and never had any real athletic talent. So public performances are out. The only exception to that was in music, in a band or group setting where I could hide behind my guitar and the abilities of much-more-talented individuals.

Nonetheless, no matter how many combat stripes you’ve got, and no matter how self-conscious and awkward you are, when your six-year-old daughter asks you to take her to West Point’s “Daddy-Daughter Dance,” …you go. And you dance.

I didn’t really want to go to the dance, but I duly donned my best suit and took my beautiful Shannon to the West Point club in January of 2015, where one of the first things we did was get in line for a photo. 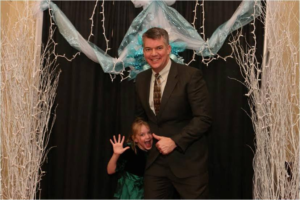 The author and his daughter Shannon at West Point’s “Father and Daughter” dance, AKA “Daddy-Daughter Dance” in January of 2015.

The photographers were handing out numbers in order to manage the large crowd of photo-seekers. Out of sheer coincidence, we got number 75. For anyone unfamiliar with the Rangers, that number is significant because the unit is officially the 75th Ranger Regiment.

I’m not big into “signs” or omens or portents or anything of the sort, but I thought that receiving that number was a pretty interesting coincidence. Looking down and seeing that number in my hand, I immediately recalled my experiences with the Rangers, the Last Roll Call ceremonies, and that “wounded Ranger” re-enlistment photo that I saw in that dusty plywood headquarters building, in what now felt like a lifetime ago and a world away from West Point.

…and it made me think. 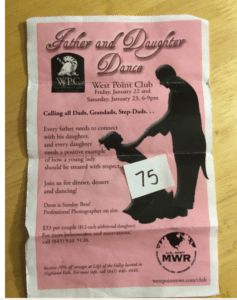 I didn’t wear my uniform to the dance that night, but a lot of other military dads did. After returning to our table for dinner after our photo session, I couldn’t help but notice a young-looking staff sergeant seated at an adjacent table. Unlike most SOF units, West Point does not have many personnel with extensive combat experience, so it stood out to me that he had eight or nine combat stripes; the bars are small and hard to count when there are a lot of them, but it was definitely more than me. There were several officers and NCOs at West Point with more than seven combat stripes, but I thought I knew all of them. The collar insignia of this NCO marked him as a Military Police sergeant. He had most of the usual “bells and whistles” on his uniform that one would expect from a combat-experienced NCO, but what made him really stand out were all of those gold combat stripes on his right sleeve. They were almost up to his elbow.

And unlike officers, enlisted personnel wear service stripes on their left sleeve, one stripe for every three years of service. He wore two service stripes. So this young noncommissioned officer had served between six and nine years in the Army, with more than half of that in combat. That’s a lot of time in harm’s way. That’s a LOT of time away from one’s family. In fact, given the apparent age of his young daughter, he was probably gone for most of her life up to that point. It really made me think. I first thought about all of the people who could, and probably should be at a Daddy-Daughter Dance…

…but they can’t because their bodies, or the minds, or their marriages, or their relationships with their children were destroyed during the war or in what came after.

…but they can’t because they’re dead.

…because life is too short.

The Rangers taught me that.

Originally from Alabama, Charles (Charlie) Faint is a career Army officer currently stationed overseas. He holds five undergraduate and graduate degrees, the most recent of which is from Yale University, and he is “all but dissertation” in his Doctorate of Business Administration program with Temple University. Educated in fields ranging from engineering to international relations, to business, his research interests include conflict and negotiation, civil-military relations, and military veteran entrepreneurship. He served seven tours of duty in Afghanistan and Iraq and over the course of his career was assigned to units including the 101st Airborne Division, the 2nd Infantry Division, the 5th Special Forces Group, the 160th Special Operations Aviation Regiment, and the Joint Special Operations Command. He also served as an instructor at the United States Military Academy at West Point for five years and was the head of West Point’s “Officership” capstone program for two of those years. Widely published in a number of blogs and professional journals, he is a Fellow with West Point’s Modern War Institute, and his most recent publication is co-authorship of the book Violence of Action: The Untold Stories of the 75th Ranger Regiment in the War on Terror. His views expressed here are his own and are not necessarily reflective of the policy of the US Army or the United States Government.