HomeCultureKilling a Man: A Ranger Reflects 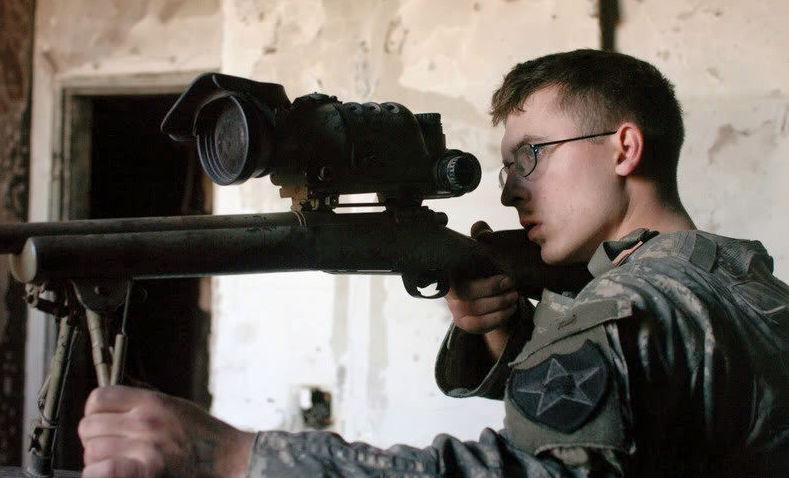 It’s not that you think it won’t happen, but maybe you just aren’t quite anticipating it when it does happen. I always thought I would know when the moment was coming… like the men who stormed Normandy. They knew they were going to kill someone that day. They knew as they were crossing the English Channel that they were going to fire their weapon, and chances were that they would find their mark at some point. They knew that and were probably prepared for that to some extent.

When you button hook that corner, in what you assumed was a dry hole, and you see him standing there… you don’t have time to think about it, to contemplate philosophy, right or wrong, or is there a God? The left forearm engages, lifting the front end of the rifle while the right hand tightens around the pistol grip, and the thumb moves to the selector switch. The eyes… the eyes move to the center mass of the target. You don’t look in his eyes and see his soul like they portray in the movies. It is a reflex as old as mankind itself, you see a threat, and you eliminate the threat.

The guy is scared out of his mind though. You realize this in retrospect, but even though he had that shitty AK-47 in his hands, he never stood a chance. He was terrified of the situation he found himself in. From the moment he felt the overpressure from that little strip of hydrogel, 100 mile-per-hour tape, and triple strand detonation chord, he knew he was fucked. He maybe had time to let the adrenaline flood his body, but not much else.

Adrenaline affects both parties though. Even though I didn’t realize it at the time, the supply of oxygen and glucose to my muscles and brain increased, my blood vessels and air passages dilated, and the muscles of the iris contracted to allow my pupils to expand. Kill or be killed, right? Something like that. Human nature.

My pointer finger had already wrapped around the trigger. It didn’t ask permission from my brain, it was just there. Was I really about to take a life? I know one thing; I sure as fuck don’t have time to ponder that question. The holographic red circle was on his chest; just above the soviet style ammunition rack, he was wearing. The intermediate phalange instinctively squeezed the trigger, the selector switch having already been forced to the twelve o’clock position.

One round, then the second impacted him, center mass… just as I had been trained. An exhale of breath, an aggressive step forward, and without even a chance to think about the implications, a third-round exited the fourteen-inch barrel and impacted the maxillary bone, just barely missing the eyeball itself.

What the fuck? Is this the apex of the experience that can be summarized as taking a life? I just separated a soul from its human body, and now I am almost on top of the body, dumping more rounds into his chest… because that’s what I should do? Make sure the threat is eliminated… right? Fuck, now I have to think about the implications of my actions as I make the call that there is one enemy killed in action, building four.

Fuck. Fuck. Fuck. “Though shalt not kill” floods my conscious, will I be denied at the gates of Heaven? Will I have a seat in the great hall of Valhalla? He had a weapon, right? I immediately suppress these thoughts; I need to continue to clear. Keep moving. Don’t be a bitch. Millions have taken a life before you, you aren’t special, continue to clear. If you didn’t shoot him, he would have shot you. Or maybe he would have just stood there like a bitch, and you could have taken him down without taking his life. Maybe. Rangers don’t live in the world of “maybe.” Do, or do not.

The noise in my ear says that the building is secure, my squad leader glances at me with a smirk. First kill. I know that is exactly what he is thinking. The body in the corner is lifeless. A pool of crimson surrounds him. That is my doing, like it or not. What the fuck did you expect? That you were never going to pull the trigger? You said you wanted this, now you have it. Fucking deal with it. He was a bad guy after all.

Well, the shoot house back on Hunter is never going to be the same… that much is for sure. At least it wasn’t one of your own guys. Death is a part of life; you didn’t do anything outside of what was natural. Man goes to war, man takes life as needed.

I think about that night from time to time. I don’t have nightmares about it, I just think about it. It’s something I would rather not think about if I were being completely honest. It is what it is though, right? Maybe I’m not as strong as my fellow Rangers. Maybe I’m the same as them, I don’t know. It is what it is. I guess I’ll just keep… on keeping on… I guess. If you were wondering, would I do it again? Yeah, I probably would. I haven’t been presented with the opportunity, but I would. I mean, I already did it once… so what’s the point in getting all hung up about it if I have to do it again? All sins are equal in the eyes of the Lord, right?