HomeCultureJohn Wayne: The Forgotten History of “The Duke” 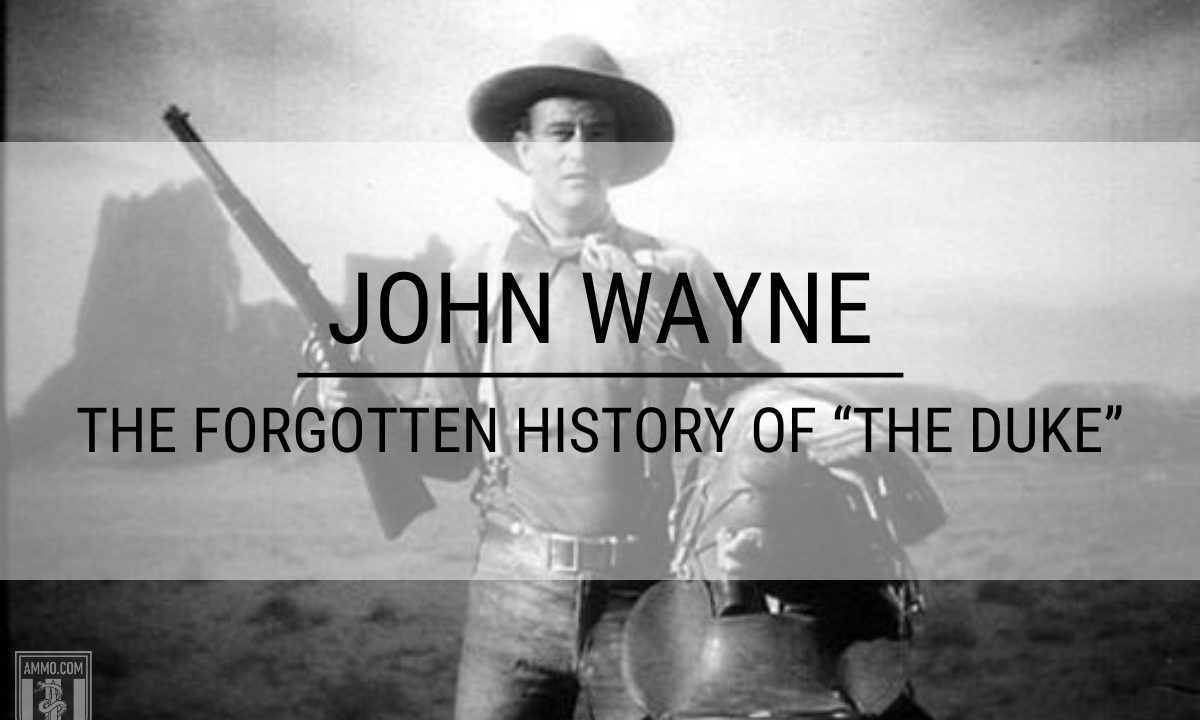 This article was originally published in ammo.com, and is republished here with the author’s permission.

John Wayne is an American Hollywood icon every bit the equal of James Dean or Marilyn Monroe. He is also a man from another era, a man whose conservatism came as naturally as walking down the street. Affectionately known as “The Duke,” he spent three decades as a top box office draw with 179 film and television credits to his name.

Before The Duke: Marion Robert Morrison

His story is as American as his values. Born Marion Robert Morrison in Iowa at a whopping 13 pounds, his family relocated to Southern California. His family first arrived in America from Ireland in 1799 and his grandfather was a Civil War veteran. His nickname was bestowed upon him in childhood (“Little Duke” at the time) by a milkman amused by the omnipresence of Wayne’s Airedale Terrier, Duke.

Wayne attended the University of Southern California where he studied pre-law and played football for the Trojans before a broken collarbone from a bodysurfing accident ended his college athletic career. Losing his athletic scholarship forced Wayne to drop out of school.

He was first hired by the legendary Western director, John Ford, and silent Western star, Tom Mix. It was Mix who then introduced him to Wyatt Earp, who Wayne credited with his on-screen mannerisms.

Wayne was hired as a favor to the equally legendary USC coach, Howard Jones, who later portrayed himself in Knute Rockne, All American, the famous Ronald Reagan film. Wayne soon graduated from an extra and prop boy to bigger parts – this began his life-long working relationship with director Ford. Director Raoul Walsh renamed Marion Robert Morrison “John Wayne,” though Wayne would keep his birth name for the rest of his life. Wayne was not present at the meeting where his stage name was crafted.

Wayne got his big break in The Big Trail, which cost a staggering $2 million (about $31.9 million in 2021 dollars). The film was shot in both 35mm and 70mm and was extremely well received by the 70mm audiences. Unfortunately, most cinemas were not equipped to show the “bigger” version of the film and it was regarded at the time as one of the all-time flops. After this, he was relegated to smaller parts in A pictures. In one of these roles, 1931’s The Deceiver, he played a corpse.

During these years, his bread and butter were the so-called “horse operas” – Poverty Row Westerns made on the cheap. Wayne appeared in over 80 of these while he was hustling to get back on his feet. In the 1933 film Riders of Destiny, he became one of the first singing cowboys, a popular style of film over the next two decades.

In 1939, Wayne rose back to the top of the marquee on an A picture, John Ford’s Stagecoach. Ford had trouble finding financial backing and a studio, but he eventually acquired it, and Wayne was catapulted into the stardom that would follow him for the rest of his life.

World War II came but John Wayne did not serve due to his age and his family status. He was classified as 3-A, however, Wayne was not content to simply sit by the sidelines as his country went to war. He tried to enlist and even asked John Ford if he could join his unit, but the studio worked against him not wanting to lose their A-list actor who was under contract. This isn’t the braggadocio of the chickenhawk – there is ample evidence in official government records of Wayne attempting to change his status, as well as lobbying by his studio to keep him stateside.

Wayne’s failure to serve is, by all accounts both personal and biographical, the most painful experience of his life. He was accepted into service in the Field Photographic Unit, however, his enlistment letter was delivered to his estranged wife’s house, who concealed it from him. He performed with the USO for the troops and even carried out a mission for the Office of Strategic Services (OSS, the precursor to the CIA).

To list every major production of high artistic merit that the Duke would be an article all to itself. He mostly made war movies and Westerns. Three stand out head and shoulders above the pack:

The Big C and the End of John Wayne

His final film, The Shootist, had more than a passing similarity to The Gunfighter, one that Wayne wanted but was turned down for. He plays a character with cancer, the disease that later took his life. It was nominated for an Oscar and was named as the 10th best film of 1976 by Roger Ebert.

Despite being enrolled in an experimental cancer vaccine study, Wayne succumbed to stomach cancer on June 11, 1979. You can go visit him at the Pacific View Memorial Park Cemetery in Corona del Mar, Newport Beach. He converted to Catholicism shortly before his death.

Wayne, a chain smoker since childhood, previously had lung cancer in 1964 and had to have his entire left lung removed. Despite pressure from inside the industry to keep it quiet, Wayne went public and encouraged people to get preventative screenings to improve their chances of survival from “The Big C” – a phrase that Wayne is credited with coining.

The Conservative Politics of John Wayne

Wayne was known throughout his life as perhaps the most staunchly conservative Republican in all of Hollywood, which was no small feat at the time. In particular, Wayne was ardently anti-Communist and more than willing to play ball with the House Un-American Activities Committee (HUAC) outing Communists in the film industry. He formed the Motion Picture Alliance for the Preservation of American Ideals and was elected as president twice for the organization. Wayne even went so far as to make the film, Big Jim McLain, where he starred as a HUAC investigator.

Joseph Stalin, who was a fan of Wayne’s film, once said that Wayne should be assassinated – this speaks to Wayne’s influence on anti-Communism. It probably goes without saying that Wayne was a big backer of Senator Joseph McCarthy, but he also voted for FDR in 1936 and was a vocal admirer of Harry S Truman.

Likewise, it’s probably not very surprising that Wayne was a big supporter of former-Vice President Richard M. Nixon’s 1960 campaign. However, in a statement that sets the bar for patriotism, Wayne said after the election of John F. Kennedy, “I didn’t vote for him but he’s my president, and I hope he does a good job.” He supported the Vietnam War and was even a member of the John Birch Society, but resigned after the organization denounced fluoridation of water as a Communist plot.

After the success of fellow conservative actor George Murphy in the 1964 California Senate race, the Texas Republican Party urged the star to run for national office from the Lone Star State. He joked that he didn’t think anyone would take an actor seriously – the joke being that he was already helping his friend, a certain former Screen Actors Guild President by the name Ronald Reagan run for Governor of California. George Wallace offered him the number two spot on his Presidential campaign, but the Duke immediately declined, and instead supported Richard Nixon’s second bid for the White House.

The Legacy of John Wayne

Wayne left a massive footprint on Southern California the nation as a whole – on his 72nd birthday, he received the Congressional Gold Medal; after his passing, he was posthumously awarded the Presidential Medal of Freedom; and the Orange County airport is named after him, featuring a large statue of the Duke, despite efforts by the left to cancel Wayne and rename the airport.

More than just a politically conscious actor, Wayne was a symbol of America and American masculinity. He was well aware of this role in American society and implored his friend and fellow actor Kirk Douglas to avoid “feminine” roles, such as Vincent Van Gogh, because “There’s so goddamn few of us left. We got to play strong, tough characters.”

Despite his reputation as a stern and stoic man, the Duke was not above laughing at himself. In 1973, Wayne was invited by satirical Harvard University newspaper, The Harvard Lampoon, to receive the “Brass Balls Award.” What started as a joke at his expense became an Army convoy complete with an armored personnel carrier for Wayne who received a standing ovation when he came onstage.

When Emperor Hirohito visited the United States in 1975, he specifically requested to meet Wayne as a representative of the American people. Similarly, when Nikita Khrushchev visited the States in 1959, he came with two requests: Disneyland and John Wayne. Additionally, he appeared on every annual Harris Poll of America’s favorite actors and is still the only person to appear on the list after his death.

Such was the status of the Duke.

Robert Aldrich, president of the Directors Guild of America, summed up the Duke in a statement at his funeral:

“It is important for you to know that I am a registered Democrat and, to my knowledge, share none of the political views espoused by Duke. However, whether he is ill disposed or healthy, John Wayne is far beyond the normal political sharpshooting in this community. Because of his courage, his dignity, his integrity, and because of his talents as an actor, his strength as a leader, his warmth as a human being throughout his illustrious career, he is entitled to a unique spot in our hearts and minds. In this industry, we often judge people, sometimes unfairly, by asking whether they have paid their dues. John Wayne has paid his dues over and over, and I’m proud to consider him a friend and am very much in favor of my government recognizing in some important fashion the contribution that Mr. Wayne has made.”

The Duke is an inspiration both in his public persona of a man’s man’s man, as well as his willingness to stand up, uncompromisingly against leftist forces who want to turn America into something other than America. He was also one heck of an actor who made some of the most entertaining films ever, with none of the leftist cultural jihads that plague Hollywood today.

This first appeared in The Havok Journal on July 1, 2021.