HomeCultureFriendly Fire: A Ranger’s Perspective on Controversies that Maybe Shouldn’t be 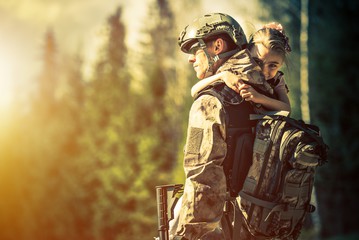 On Veterans Day 2015, Walmart rolled out their Green Light a Vet campaign. Many veterans were outraged at the fact that Walmart was selling green light bulbs in their name, and claimed it was all for profit. As if the sales of $.96 light bulbs would move the financial needle for Walmart! The fact is that Walmart donated all the profits of the sales of green light bulbs to worthy Veteran Serving Non-Profits. It was a statement: Veterans, we see you and we are here for you. We support you.

Why were we attacking them?  They were the “Good Guys.”  As a community, we should have just said, “Thank you.”

Fast forward to today.  Recently, Howard Schultz announced that Starbucks will hire 10,000 refugees worldwide and the response from some in the community, again, is outrage. Many in our community are indignant that Starbucks would hire refugees over veterans or military. Fact is, Starbucks made a declarative to hire 10,000 veterans and family members back in 2013, and have since hired 8,800 veterans and military spouses. Meanwhile, Howard and Sheri Schultz’s Family Foundation has poured millions of their own dollars into supporting the veteran community.

Neither Walmart nor Starbucks (nor the Schultz Family) were even given a chance by the raw and reactive. The facts were never even examined. Some of us failed to “see” before going for the “kill”.

We know to gather the facts of the situation prior to formulating our plan of attack. It has been beaten into us since day one of our time in service. We are no longer in service and the intel is no longer fed to us, which means we must be more responsible, more discerning in where we seek out the facts. It also means we must take our time and seek to understand prior to the “ready, fire, aim” attitude that is counterproductive to our unity as citizens. Counter-productive to our ability to coexist as Americans: different, yet united.

I fear that at some point, America is going to get tired of trying to support us if even the smallest “we” criticize the attempts to assist with little (to no) context and with such vitriol in our responses. That would be a shame, especially since we risked all to protect those who are now reaching out to us. Especially since many of the folks who work at these establishments and lead these programs are also veterans themselves. And especially since many of us know exactly how it feels to be attacked by the very people we are there to help.

I hope we are willing to investigate the next story before we react. I hope we stop falling for the title of the next “clickbait” article.