HomeCultureFried Bread, a Reuben and the Cleveland Cavs: A Ranger Reflects 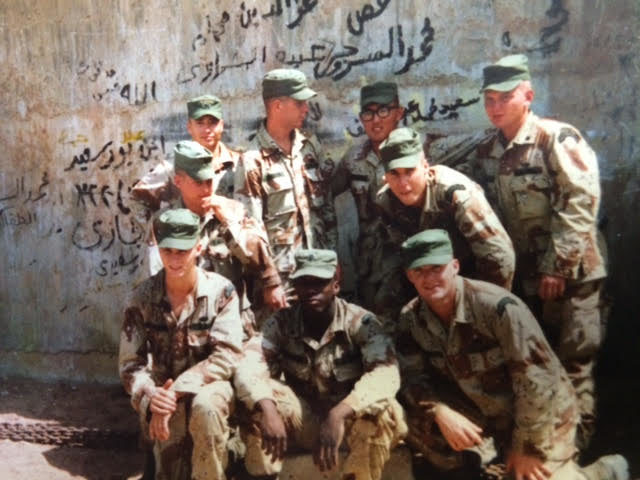 This article first appeared in The Havok Journal on June 30, 2016

Seriously Though? What is it about fried bread, a Reuben, and the Cleveland Cavaliers that make this country what it is?

So there I was… standing in the middle of downtown Cleveland moments after concluding my first VA hearing that would re-determine my disability rating after seven years of retirement. That is, until they decide to change it again. 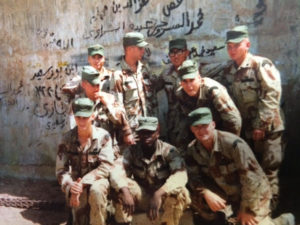 It was chow time and I had arrived at the deli that my wife, yes she’s my wife, not my spouse, always thought that word sounded a bit too gender neutral for me, had recommended from some raves on FB.

Thinking that my hearing went well, which is probably the first sign it didn’t, I figured I would wander four blocks from the VA building and get a good lunch before embarking on the three-and-a-half-hour-trek home. Do I need to mention that you don’t get reimbursed by the VA for appointments that aren’t medical? You told me to come up here Uncle Sam. Hey, no biggie, I’ve always enjoyed turning fuel into noise…

What I noticed on my little jaunt in the city by the Lake was the gobs of Cleveland sports paraphernalia EVERYWHERE! Yes, it was a special day as LeBron and his Cavs made it to the NBA finals. However, I was thrown into ”The Matrix.” Cavs, Browns, Indians, Cavs, Browns, Indians, Indians, Browns, Heat (Daup, wait a minute….). These folks were proud! And what a beautiful 75-degree day it was too, couldn’t have been better. A new place, a new experience.

Walking into the deli, I knew I was someplace special. The smoky smell of frying bread took me right back to my Grammy’s 35 years ago. Ahhh, frying bread and gin, the two smells I remember the most from her house. This deli was fantastic, great people watching crowd too, mostly professionals on their lunch break, rounded out with some “selfie” gens, one or two Blue Collar folks and last but not least, a Knuckle Dragger, One Each.

I went for my standard fare in a new delicatessen, the Reuben. It was a masterpiece: fresh corned beef piled high, with the tart sauerkraut I love, Thousand Island dressing, and superb bread. It was like being back at Benning eating grits for the first time. “What are these things Drill Sergeant?”

After 21 years in the big green machine, I still can’t tell you what hominy is. Is it a bean? Rice? What the hell is it? Back to that sandwich, it was an emotional experience. Never being one who was shy of licking my plate, I checked my three, six and nine, and licked that puppy clean. I can’t 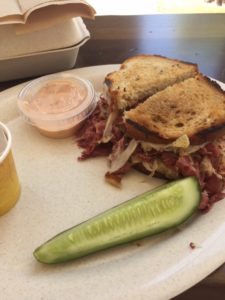 wait to get back there. If my belt maker hadn’t gypped me on the number of holes he put in my belt, I truly would have had another one on the spot.

I don’t know about you, but the military taught me how to appreciate a good meal and eat that soma-da bitch in record time!

It was the strangest thing sitting in the window of that deli. I couldn’t have felt more American. As corny as that sounds, I was experiencing a true sense of belonging in a city that I wasn’t familiar with. It was the same feeling you get when you walk by a fellow Vet, or pass a rusted out pick up with a USMC sticker on the bumper (take that Devil Dogs!). Community, brotherhood, a way of life. All of the intangibles that we took The Oath for.

As my empty plate stared back at me, I pondered the morning’s events and how very appreciative I was of the assistance offered during my hearing from the Disabled American Veterans (DAV). I got hooked up with the DAV through a friend of mine. Not having used their services before, I was somewhat skeptical.

Pretty much like when your Platoon Sergeant asks you how much you weigh and if you’d ever heard of the post “smoker.” Their team knew exactly what the process was, what to be prepared for, and what the follow on actions would be. They were truly there to help and help they did. I didn’t feel like I was left flapping in the breeze doing battle with an organization that is fighting its own demons.

The feeling of being American is so much keener when you’re part of the most time honored tradition in the world. That day I got a boost from a fantastic city, an outstanding organization and I allowed myself to grab a hold of the helping hand that was offered.

So, seriously though my Brothers and Sisters…Go to Cleveland sometime, get the Reuben, help the Cavs celebrate their first title, and take the hand that’s offered: you’ll get a chance to pay it back soon enough…