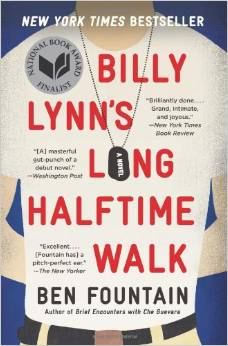 I’ve been writing a book, and sometimes when people ask me what it’s about I say “a young black single mother navigating corporate America.” There’s a gawk, then a slow smile, then a good laugh. I’m a 32-year-old, childless white guy.

So when Ben Fountain, who never served in the military, wrote Billy Lynn’s Long Halftime Walk, a book about a squad of infantry soldiers coming back from Iraq to Texas to be paraded at a Cowboys football game, I was surprised more people hadn’t called him out on his hubris. I’m not saying all authors have to do the things they write about. But if someone’s going to write for a group on their behalf there ought to be asterisk in the reader’s mind. 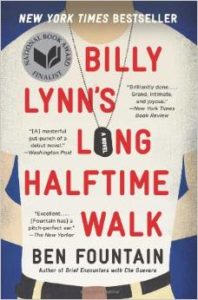 During the entire read I couldn’t help but feel both impressed by Ben Fountain’s skill as an author but somehow vaguely insulted. Something about reading Billy Lynn really bothered me. As one of my veteran classmates had put it, “either it’s a work of genius or the author completely missed the mark.” There was just something so… presumptuous about Billy Lynn.

To be fair, any fiction author presumes to tell the story of his characters. An example: David Morrell’s non-serving ass wrote a Vietnam veteran protagonist for First Blood (Rambo), an instant classic.[1]  Morrell got the idea from hearing stories from his Vietnam veteran students. He liked the idea of a Korean war vet going toe-to-toe with a ‘Nam vet. Sure, you can tell the author isn’t a veteran. Nuances in the prose betray a lack of military service. But the book works.

First Blood works because Morrell doesn’t presume to speak on behalf of all ‘Nam vets. His lack of hubris saves First Blood.  As an allegory, a ‘Nam vet and a Korean War vet killing each other on American soil is a bloody good concept. Morrell doesn’t treat his characters like passive victims, and he doesn’t make an overt political statement on their behalf.

I wish I could say the same thing about Billy Lynn.

Billy Lynn tells the story of Bravo Squad, whose “legendary” actions in Iraq are captured by a Fox News camera crew. They become stars, and mid-deployment do a victory lap to gain support for the war a la Flags of our Fathers. They are paraded (literally) around, sign autographs, do press circuits, and are given otherwise celebrity treatment at a Dallas Cowboys game. Meanwhile, a Hollywood agent negotiates film rights on behalf of the men of Bravo Squad for their own feature film. Somewhere in there are references to Catch-22.

For all its legitimate insights into commercialized America, Billy Lynn can be deceptively trite. Bravo Squad is as cliché as it comes. We have the token black and Mexican soldiers, Crack and Montoya, to show how the military experience transcends racial boundaries, also that soldiers come from poor backgrounds.

There’s the salty, cool, honorable squad leader (white). There’s the dead guy, a well-read philosophical grunt who would have added so much to the world (also white). And last, there’s Billy, the mid-western poor white kid with a heart of gold, who joins because there are few economical avenues where he’s from. He’s the kid who’s surprisingly bright, thoughtful, graceful to women, a virgin even. I can’t think of a better lovable Joe-Snuffy character if I tried. Oh yeah, he’s a war hero.

Also, Bravo Squad talks to one another as though they would never be friends outside of their military experience, and yet they share that common bond. Last, and most importantly, Lynn questions whether his life and death war experiences actually add any value to his human experience. That is, Fountain points out that taking the red pill may be more of a handicap than advantage. These insights make damn good writing.

But for all Fountain’s good insight and commentary, Billy Lynn suffers from a lack of authenticity that comes when an author wants to say too much on behalf of his subjects.

In all of America’s blatant exploitation of Bravo Squad and little Billy, the only characters who show genuine concern for Billy’s well-being are girls, his sister and his Cowboy cheerleader fling, both of whom he shares an amusing sexual tension, one of which he acts upon. These women provide the only sane option to Billy in this exploitive American landscape: he should not have to go back overseas.[2] Sis organizes a desertion plan for Billy, one which he is genuinely tempted to embrace, but chickens(?) out on. For all of Fountain’s overwhelming array of satire, his thru line is reduced to the old “bring ‘em back” plea.

Fountain’s hubris is present elsewhere. In a scene where Billy Lynn visits the Cowboys locker room, he sees the giants who play ball, the “professionals” with millions at their disposal. “Send them to Iraq!” he muses. “We’d win the war in a month!” I’d be hard pressed to believe a soldier, an infantryman no less, would think this way, even in jest.

Maybe more ironically, Fountain seems to be making the point that our troops are underfunded and equipped, a point most liberals should be left scratching their heads over given our war budgets and nearly unkillable body-armored automatic weapon carrying grunts.  Compared to the rest of the world, the American military could hardly be described as anything but “overkill.” Also, we do sometimes send football players.[3]

More importantly, any veteran infantryman I’ve talked to has never considered desertion in the GWOT.  Bowe Berghdahl notwithstanding, desertion from the Army is a draft dodging thing from Vietnam, one which Fountain could probably more easily identify with given his close proximity to the baby boomers. The thing I’ve noticed about all veteran infantrymen I’ve spoken with is that their demeanor toward the war is incredibly complex. There are highs and lows, a desire to go home but also one to stay and fight. A veteran’s attitude toward the war is usually overwhelmingly ambivalent.

I didn’t see that rich ambivalence in Fountain’s subjects. Instead, I got the overwhelming feeling that all of the soldiers in Fountain’s book are pretty much screwed.

And this is where I get stuck on the dreaded two words victim narrative. Yes, Billy Lynn’s Long Halftime Walk embraces a victim narrative. Billy merely perseveres. He is utterly voiceless, exploited in body and soul, doesn’t make any decisions for himself, is abused by his country and countrymen, and fights for a cause he ultimately doesn’t believe.  Fountain, speaking through these veteran characters, makes a strong personal political statement.

For a work that satires a country incapable of hearing the plight of combat veterans, the irony of Fountain speaking on their behalf shouldn’t go unnoted. But it’s when the irony is missed that really gets me.

James Fallows, in his controversial article highlighting the military/civilian divide The Tragedy of the American Military[4] actually quotes from Fountain’s work to support his own arguments. “From the troops’ point of view,” he writes, “the spectacle looks different. ‘There’s something harsh in his fellow Americans, avid, ecstatic, a burning that comes of the deepest need,” the narrator says of Billy Lynn’s thoughts.” I love this closed-feedback loop, a civilian author empathizing with the troops by citing a civilian author empathizing with the troops.

As it stands, Ang Lee is slated to direct the film adaptation of Billy Lynn’s Long Halftime Walk. This is funny. A novel by a civilian about a squad of victimized veterans who are being exploited for their story for a film option, is being turned into a film. In the novel, the veterans never see a dime for their story.  In real life, the veterans don’t exist.

I liked Hurt Locker. I liked Phil Clay’s Redeployment. The characters come off as badasses at least. I liked First Blood, even though it wasn’t written by a veteran. These books have at least one thing in common: the characters aren’t all victims.

But when a civilian author speaks on behalf of veterans and paints them as poor exploited little fellas I can’t help but feel insulted. Worse, when these works get canonized, you get authors in The Atlantic citing them as gospel. There is a real danger to our collective psyche if this kind of misrepresentation continues. We’ll have another whole generation of Americans who only have the time to read one book, watch one movie, and then form a fraudulent opinion.

Look, the book is funny and entertaining, the prose well-written. The movie will probably be fine. I love Ang Lee films. I just hope that the American audience doesn’t assume there’s an overwhelming authenticity to the film, wishful thinking on my behalf, after seeing the reaction to American Sniper.

[1] This book was taught in colleges and high schools before the movie was ever released.  http://davidmorrell.net/rambo-pages/rambo/

[2] I remember in basic training when us boys would a good chuckle about a girlfriend’s naïve expectations of the military – “Why don’t you just tell them you don’t want to go?” On second thought, maybe Fountain’s on to something…