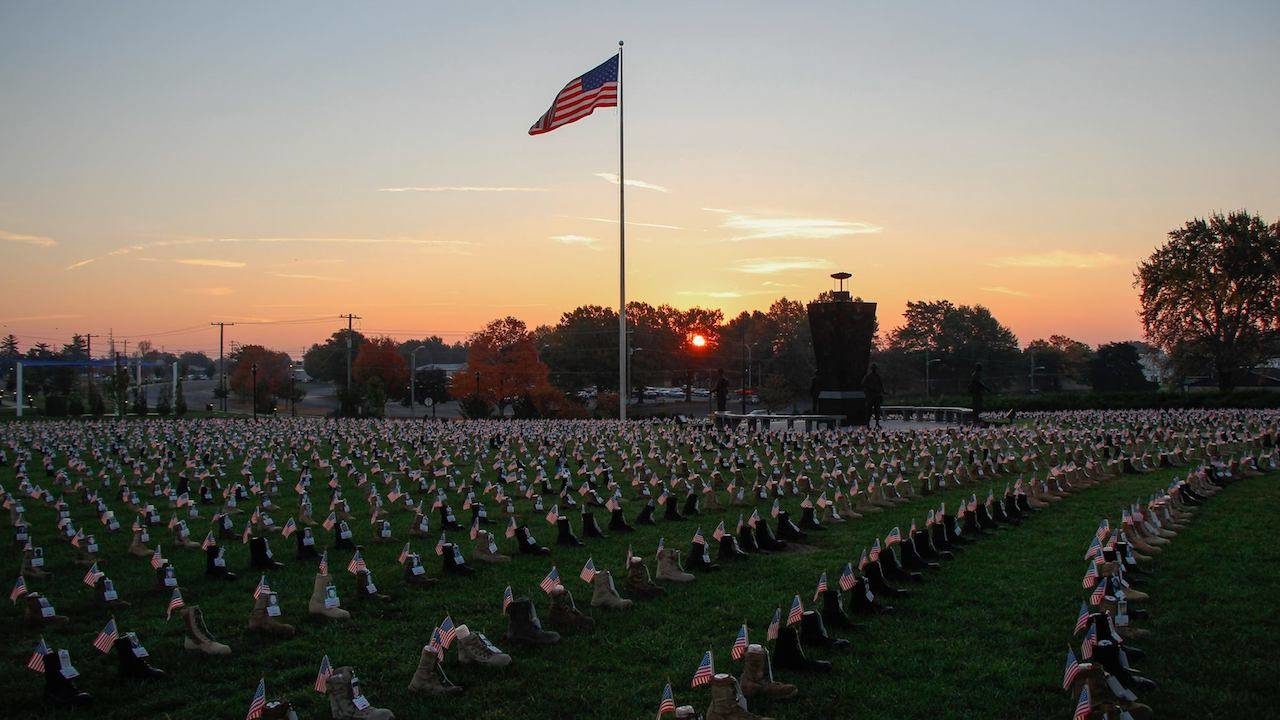 This first appeared in The Havok Journal October 27, 2016. It is republished because the issues discussed are just as important and relevant today.

When Congressman Frederica Wilson aired her grievances regarding a private call from the President to LaDavid Johnson’s newly, devastated Gold Star family, I tried to figure out the deep pain, conflict, and adrenalized reactions I felt—and why.

I had people say to me: “He knew what he signed up for” when my son was killed in Afghanistan on his 14th deployment. They even aired their political opinions about the war, basically implying my son died in vain. He joined before 9/11 and never expected us to go to war. At 18 he had to plan his will and decide where he’d be buried. He told me that he hesitated asking his girlfriend to marry him, because he knew the risks and didn’t want her to be devastated if he was killed. Thankfully, they married and I have two beautiful granddaughters—his DNA that I can hug—and an amazing daughter-in-love.

Because of my son’s media notoriety, the media exposure only intensified my stress levels, which were over the top, and the media who honored my son caused another Gold Star mom to become jealous of the media coverage of my son’s death and said things that felt mean to me. In the beginning when you’re so raw, the pain of offense burns deep into the psyche and emotions.

Every time a Gold Star parent reads about the death of another soldier, it kicks us in the gut. When I saw the picture of Mrs. Johnson lying over the casket, I wished that she did not have to join the “Gold Star family” that no one ever wants to be a part of. I wanted to hug her and to protect her. I thought about her children who will grow up without their father and the baby in her womb who will never meet her/his dad. I wanted to know more about her hero husband, not other people’s opinions of what this or that person thought or said.

I relived all the feelings of being informed of my firstborn’s death, his body in his refrigerated casket being repatriated at Dover Air Force Base—the Morgue Air Force Base. At that time, my brain was so blown up and I was beyond devastated. I can’t even imagine the amount of extra stress and anger the media free-for-all may have created for Mrs. Johnson on top of pregnancy hormones. I wanted to shield Myeshia and LaDavid’s parents from people who may believe their actions, their outrage is well meaning.

I finally figured out what bothered me: I’m appalled that Congressman Frederica Wilson took it upon herself to announce something so personal, so private, so sensitive, and so vulnerable to the media about a family devastated by the traumatic death of a beloved husband, father, and son. Wilson unleashed a media firestorm. Trump’s knee-jerk reaction only stoked the blazing inferno. The media blamed Trump for triggering their frenzy. The media, social media, and comments online discharged their volleys of anti-Trump rage, never giving thought to how the media and social media eruption might affect Gold Star parents. Even if the family was angered by Trump’s comments, the rage of others is not something else they needed to shoulder, in my opinion. Perhaps they feel differently.

If Wilson and Trump had kept their media and twitter mouths shut, there would be no media firestorm, no comments online, no accusations of politicizing, no using Gold Star parents to rack up points for whatever agenda or motive or personal hatred, or side you’re rooting for or against.

Why don’t attention seekers realize they only increase the stress level of Gold Star parents and inflict unnecessary pain on top of the worst pain we’ve ever experienced in our lives? I understand the dynamics if the Johnson family was offended by Trump’s remarks. The robotic official who came from Washington, DC to Dover Air Force Base to offer a programmed, official condolence to me was beyond offensive, but I TALKED BACK to him. Six years later, I realize this must have been a horrible assignment for him.

As I look back on that vulnerable time period, my ability to rationally process the anger of others or what others said was shattered by the horror of my son’s death. I was so, so vulnerable. I instantly discarded from my life people, who meant well who said ignorant clichés that offended me. I simply lacked the emotional margin to evaluate their intent or their comments or to offer them mercy or grace. I even cut my own mother off for a couple of years, because she said things that felt hurtful or inappropriate. I was not the person who she could depend upon for her grief support. I cut off people who made my son’s death about them. I cut off people who depended upon me who didn’t realize I lacked the emotional margin to prop them up. I especially cut off angry people. Their anger was far too draining.

When my son was killed six years ago, October 22, 2011, a journalist betrayed me. She reported something I told her “off the record.” Her betrayal ignited unbearable conflict in our family, creating unnecessary pain and separation. I learned the hard way that nothing is “off the record” to a journalist–if it’s sensational, and what I said was sensational.

I’d often wondered if Kristoffer took part in the Jessica Lynch rescue, but he never talked about what he did and even refused to answer me when I questioned him about that mission. After Kristoffer was killed, I asked his Army friend, “Did Kristoffer take part in the Jessica Lynch rescue? He said, “Yes, he did.” Later, I learned about how seriously veterans take ‘stolen valor,’ a term I’d never heard before. My son was not a part of that raid. I felt nothing but burning shame and was sure that the Army Public Relations Officer hated my guts, because of the mess I naively created.

Because of all the media coverage about Kristoffer being killed on his 14th deployment, I became an instant neighborhood celebrity. An acquaintance I barely knew claimed to be my best friend. This person called the media and inserted their self into two media stories supposedly about me and about my son’s death, even giving the newspaper journalist pictures from Kristoffer’s memorial program. I was so upset by that person’s actions that I hid in my house to avoid that person. When I saw this person and needed to go someplace, I felt trapped because I couldn’t leave my home. This individual has no idea that their actions almost sent me over the edge and shot my blood pressure to stroke levels.

Here’s only a portion of what I emailed to the Colorado Springs newspaper staff to protest that person’s actions: “I’m Kristoffer Domeij’s mother and I didn’t know who to contact, but I’m emailing all the news editors.  Could you please take down the story, (and I included the title, writer, and URL link.) At the very least, please remove my son’s name and pictures from the article.”

The writer of the story contacted me. His email only enraged me more, causing me more distress, distracting me from mourning. I went back to copy and paste his email into this article to prove to you, the reader, what a calloused, narcissistic jerk he was. However, six years later, as I re-read the email, while I don’t agree with everything he wrote about the attention seeker, it was actually a very gracious email.

As I tried to figure out what I was feeling and why, these Bible verses about loshon hora–evil speech–came to mind:

People, all the dynamics of our children being killed are beyond insane. So how has this media firestorm affected me? I suffer from chest pains, severe emotional pain, depression, emotional and physical exhaustion from the anxiety. My body has been adrenalized like it was the night I was informed of my son’s death. When I lay down at night to sleep, my body uncontrollably jerks, as if I’m experiencing a seizure.

I’m weary of the incessant, public lynching of Trump by the media, politicians, and those who hate him. (No, he was not my candidate for President, and neither was Hillary.) I’m sickened by Trump’s half-baked tweets, politicians’ vile rants, and Hillary’s bitter rhetoric.

Honestly? This is what I want to scream to everyone who express opinions not based upon their personal trauma, but based upon out-of-context sound bites triggering unresolved hatreds which are dividing our nation and imposing unnecessary pain upon Gold Star parents: SHUT UP! SHUT UP! SHUT UP!

Right now, “SHUT UP!” is about all the mercy and grace I can extend to those who think airing their opinions are so much more important than understanding, compassion, and giving others with a different opinion or worldview or way of communicating the benefit of the doubt. When traumatized Gold Star parents are justifiably too devastated to offer others the benefit of the doubt or simply lack the emotional ability to receive attempted acts of compassion, what’s your justification for your judgmentalism and opinions?

Please watch this video to honor my handsome, Army Ranger son, Sgt. First Class Kristoffer Domeij, the most deployed soldier in American history to be killed in action.