A Warrior’s Tirade: The Price of Identity Politics
by Michael Bama Katt 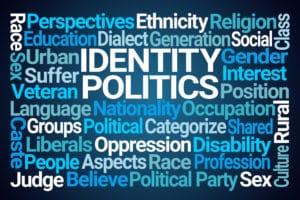 Shouldn’t come as much of a surprise how far ranging my natural habitat is. My first 35 years were military/conservative, and I’ve since picked up some very dear friends from over there on the port side of plumb. I’m grateful for most all y’all. If you break my friends down to their fundamental components you’ll find a bunch have a facet or two that has ’em open to being stereotyped. I’ll not have any friend of mine drawing heat just for being one of “those people”. I’m not gonna have them feel threatened, or actually BE threatened, by some skeezy little fuckmook running on hate and stupid. I have no problem at all standing up with ’em to brush that back. I have no problem standing up FOR them if they just can’t deal at all.

If you put The Fear in one of my people’s eyes I’ll be sure to get that right back to you. That’s just the right thing to do. So it’s pretty goddam disheartening to see this kind of thing creeping rapidly outward. For the fourth time in too short a time, I put a helluva lot of time and effort making something for a friend JUST because I know he’ll get a kick out of it, I go to drop it on his wall, and I see he’s an active participant in the bullshit stereotype game.

Dude. Seriously? I shed blood for you, man. I picked up forever scars for you. I’ve hurt people for you. I helped you out of that net. Now you pick it up and throw it at ME? It’s immediately evident you’ve not thrown the first lick of effort at personally confirming any of the garbage you’re pushing. Whatever ain’t subjective there is verifiable hogwash, and you’re certainly smart enough to recognize that had you looked.

You hate me and dear friends of mine because you were told to, and it doesn’t look like you even bothered asking why. That’s a rotten plot twist no matter what light you put it under. But you’ve been on the inbound end of that. You remember how you felt that night way back when? That ugly rumble at your core once it was obvious those bastards were coming for you, and they didn’t even CARE that you’d done nothing wrong.

You fit in that box and that was reason enough. Now close your eyes and imagine those bastards were your friends. Yeah. You know for a natural fact I respect your birthright to disagree with me, and that includes doing my level damnedest to see your point of view.

It does not include being cool with you posting misinformed, deceptively edited, and/or straight up lying hogwash about us. We’ve done you no harm. If I’m remembering correctly, you, me, Stan, and Trey were pretty damn euphoric the night we clobbered those skinheads into a full retreat.

So when did you start using them as role models?