Major General Harold J. Greene was recently killed in the Marshal Fahim National Defense University at Camp Qargha, just west of Kabul, Afghanistan. At least fifteen other coalition members were injured in the attack. To date, MG Greene is considered the highest-ranking coalition member to be killed in Afghanistan.

When it comes to the ongoing Afghan War, American media has been selective in its reporting over the years. This latest atrocity has served as a reminder to every American household that the war in Afghanistan continues.

American media decided to cover this specific incident and I personally believe it was merely because we lost a two star general.

My issue is not about the reporting of this incident. My issue rests in the selective reporting that has occurred over the years. If our media were worth a damn, they would have reported similarly with every American death in country.

So why was this incident covered so highly? I will tell you—it was because a two star General was killed.

I personally take issue here. Never in a million years should anyone make military rank relevant when it comes to those killed in action. The life of a Private is just as valuable as the life of a General.

So then why have we been socially conditioned to perceive this one specific attack to be so important if we accept that rank should not play a factor in those killed in combat?

As my time in the military grew, I realized that officer rank, in general, was bullshit. I take issue knowing that just because someone gets a college degree before they enter service forces a soldier who has been enlisted for twenty years to render a salute out of respect. I take issue knowing that a butter bar Lieutenant, who knows virtually nothing about leadership, let alone war fighting, is automatically placed in a higher position of leadership and pay than an eight-time deployed Sergeant.

Yes, I believe officer rank, in general, is crap. HOWEVER, I also know some form of rank structure for a hierarchy is needed within the Armed Forces.  Unfortunately, I believe our modern day military force is doing it wrong.

I have been inside the Pentagon. I have seen many wearing the rank of Full Bird Colonel or a star or two on their uniform who had zero combat experience—many of which I found never have even deployed to a war zone. But, because of their rank, we are told to respect them.

Why? Why should any military member respect such individuals? Because they started their military career with a college degree before the majority of the force?

I love the Marine Corps motto that states, “Every Marine is a Rifleman first.” As service members, no matter your branch, MOS, or rank, it is expected that during times of war, we fight. We are expected to step up to the plate and destroy our enemies. Maybe this is the reason why I have the utmost respect for the enlisted force, much higher than I do for many officers, who have repeatedly placed their lives on hold so they can deploy and actually fight.

Yes, the vast majority of those who actually, truly fight our enemy comprise of the enlisted force. Very rarely do we find officers, of any rank, engaging the enemy. Of course, some officers have led in the front, US Army Captain Kearney comes to mind, but he and other combat hardened officers are a minority within the officer corps. 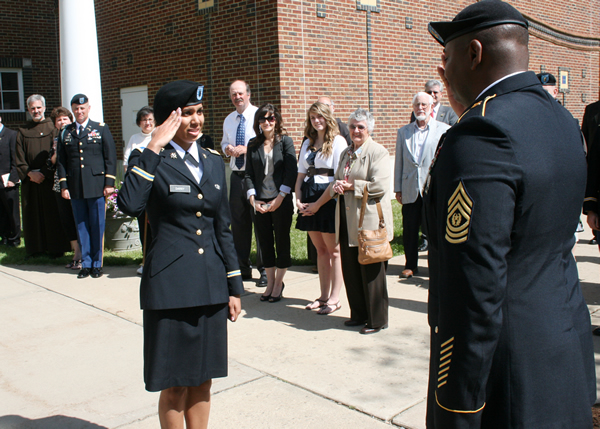 In my humble opinion, those enlisted members I speak of should be the ones a large percentage of our officers salute.

There was a time in our history where field promotions turning enlisted members into officers actually happened. The practice was not all that common but it did happen. Unfortunately, after World War I, the practice became even more of a scarcity.

Considering, on average, the United States finds itself in some form of military conflict every ten or so years (some reports claim it may be every five years), I believe that is more than enough experience for our enlisted folks to assume leadership positions within the officer corps.

Considering in the Air Force alone, 7% of the NCO corps and 24% of the Senior NCO Corps have a Bachelor’s degree, and in today’s Army, MOS 51C (Contracting) it is required for enlisted personnel to earn a Bachelors within 24 months, it is apparent education should not be the leading factor for a young officer to “earn” his/her butter bar.

As a society, we place a huge emphasis on college education but recently, many are finding they really aren’t all that important for one’s success. Sure, depending on one’s career field, they can help but not always. It’s a collegiate game of false perception versus reality.

When it comes to leadership skills, reality has very little, if anything, to do with a college education. When it comes to our military, we should realize there are loads upon loads of enlisted members who are stand out leaders—many of which have more leadership capabilities than our officers.

Personally, I believe our military needs to take a hard look at our officer corps’ requirements and begin to think about re-instituting combat promotions of leadership for our enlisted members turning them into officers—because let’s face it, deep down inside, how many enlisted troops with deployments under their belt truly, deep down inside, have any ounce of respect for that butter bar lieutenant straight out of college?

Some would claim this writing to be insubordinate in nature while others could be asking what this really has to do with the opening paragraphs discussing Afghanistan and the recent death of Major General Harold J. Greene.

Well, openly, I will admit that a big part of this is about me bitching about our current officer corps and the requirements to become an officer. The other part of this is much more serious and it’s quite simple—our enlisted force has been kicking ass and taking names for over a decade while many officers haven’t done shit in comparison. Walk into the Pentagon and you will see what I mean.

Major General Harold J. Greene did exactly what was asked of him—he went into Afghanistan and performed his mission to assist Afghan military leaders in their transition once our coalition exits country. His death should not be sensationalized because of his rank. His death should serve as a reminder that a war continues in Afghanistan and our men and women fighting there are in constant harm’s way.

I only wish our media would report similarly on the tragedies that occur in Afghanistan, no matter the victim’s rank, unit, or branch.  No service member’s life is more or less important merely because of the rank they hold. Apparently, it appears that American media doesn’t see it that way. If only we would have a media willing to report on the wars we fight like we had immediately following the attack on 9-11.