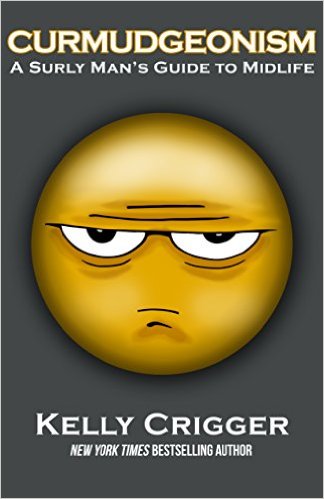 Our friend Kelly Crigger recently produced one of the most interesting, hardest-hitting perspectives on life that we’ve ever read:  Curmudgeonism: A Surly Man’s Guide to Midlife.  Check out the book review posted on Ranger Up’s Rhino Den, read a couple of excerpts below, and then head on over to Amazon to buy a copy for yourself.  And let us know in the comments section what you think!

From  Curmudgeonism: A Surly Man’s Guide To Midlife
by  Kelly Crigger

I heard a guy say “I didn’t go to my best friend’s funeral because I couldn’t deal with it” to which I replied, “You’re a pussy.” I’ve always been incensed at the thought of letting my family or friends down in life or in death. A funeral isn’t about you or your fragile feelings. It’s about respecting the guy who died and comforting his family by showing up and remembering him so all I could think was, “Suck it up, cupcake. You’re not the only person who’s lost someone.”

That’s when I knew I was changing. I found myself becoming jaded on people who led a life less challenging and still bitched about it. It wasn’t that I hated people, I just disliked being around them and was struggling with a world that demanded I say ‘there, there, it’s not so bad’ when I was really thinking ‘quit your whining!’

Curmudgeonism is a state of mind, unwavering, unapologetic, and uninterested in what people think. We are the proverbial old dog that can’t be taught new tricks because we know the old tricks are tried and true. We have firm beliefs that can’t be shaken. Free trade is good. True leaders are rare. Happiness is a luxury. Golf is a waste of time and we don’t have enough years left to be unproductive. We don’t apologize for our views because we’ve spent half a lifetime developing them.

Theory and idealism sounds good in school but only until it becomes cost prohibitive and the real world determines ground truth. Curmudgeons are uncaring about what people think and have low expectations on the world because it’s done little more than disappoint us. We’re middle aged and tired of looking, acting, feeling the way people want us to, so we’re breaking out and being who we were meant to be; irascible curs who make the world a better place through brutal honesty. We see this as our duty and take it seriously.

Here are a few of the short, funny maxims of the book:

You know you’re dead when there’s a scorching hot chick next to you on a plane. I always get stuck next to the snoring, invasive, smelly shitbird when I fly, so I’m convinced the first time I’m seated next to Sophia Vergara we’re going down (like she flies coach…Pshaw!). It’s either nature’s way of letting me die with one last glimpse of the beauty it’s capable of making, the universe’s way of reminding me who’s in charge, or God’s way of saying “If you’d loved me more you could have had this.” How spiteful.

I want a guy named Dick next to me in a barfight. With that name he’s probably spent a lifetime getting picked on and standing up for himself, so there’s a good chance he’s a trained pugilist and has your back. Forget all the Mikes and Johns of the world. When the shit hits the fan I want a Dick behind me.

Nothing shuts a party down like saying something no one has the guts to argue about like “I think teachers should be armed.” It’s not that I believe it, but it provides a few brief moments of confused silence before the rage begins. Then walk away. You can’t win that argument.