HomeCultureComfort is a Terminal Disease 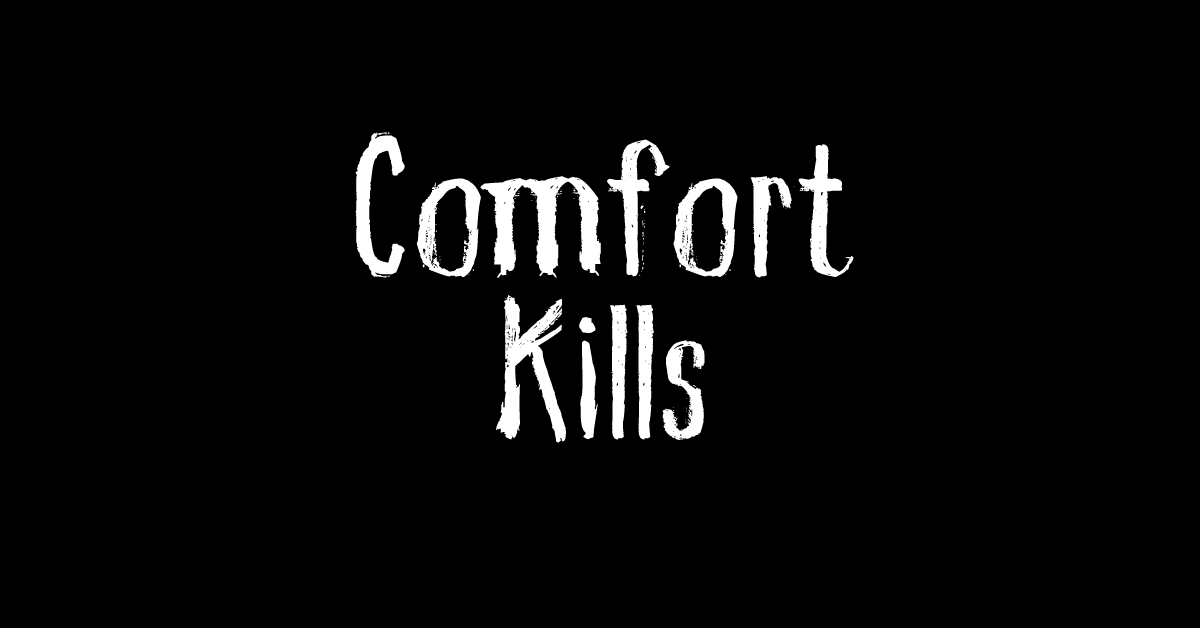 Mind blowing. It’s so simple once you can see it. Can you be manipulated everyday by less than eight-written-words over and over again? With seven written words on a social media post formed as a question based on a memory I can get a larger response than a seven-word objective question. I can get even more response if I make it an emotional question. “Ever felt love, tell us when … Please” will generally get more responses than “Is school important…why/why not?” Also, with each question I can loosely judge the ratio of people willing to answer an emotion based question versus a literal question.

People can affect others with words and pictures that provoke emotion. It’s manufactured polarized thinking and you probably didn’t even consider it an issue until now. Television is literally emotional porn on meth and social media is comprised of the largest group of lonely people ever. Who reads a newspaper these days? Nobody reads a newspaper because the information is too damn slow. Our brains can’t handle the lack of stimulation. We must be told how to think or we get insecure and panicky. However; we’ll still scan the headlines because it’s fast and emotional but what if the headline is misleading to the information in the article. Emotional tweaking 24/7 365. How scary is THAT!?

Try to recall all the times a headline caused you to react emotionally; either happy, mad or sad. See what I mean? Am I starting to make sense? Think about a meme that infuriated you, made you happy or even maybe kicked up your libido. Nearly instantly, with only a glance of a photo and a few words; look at the effect it has on your mood. If it can change your mood or attitude; it automatically has an influence on your behavior. How influenced do you think you are? What does the influence do to your behavior? How deep do these strategies go that combine photos, a few words and an emotional response go? Here’s a few places; advertising companies, politicians, political parties, news agencies, bloggers, the entertainment industry, public service announcements and by the government when they need public support in one direction or another.

I think the Obama campaign was utter genius. I watched it from a PsyOp perspective and it joyed me. I thought that someone this brilliant can unite a country and really bring “hope and change”. It all seemed, in principle, to appeal to so many because mentally members of the target audience could make it whatever the heart desired. The target audience wasn’t a demographic based on a definable metric. Rather it was commonality across demographics by selecting target emotions that defined the group. The target audience was identified by selecting a group by the way they believed. The target audience was a group that possessed a specific set of emotions; an inner idealist and an inner narcissist that is dying to believe a person could rise to the presidency as the “common man”. The designer of the campaign truly sold us on our own dreams. The target audience were those with a common thread and the defining parameters of the group they appealed to was: “people that believe everyone can have a better life”. Consider that the words “hope”, “and”, “change” is a three-word slogan that seriously aided a presidential campaign. All thrown together on a Kennedy backdrop with themes about “youth”, “pro-civil rights” and “anti-corruption through transparency”. Who doesn’t want to have hope and who doesn’t want some sort of change? Americans believed voting for Obama was literally as good as resurrecting an martyr that could make dreams come true. If you didn’t vote for Obama you felt like you had to justify your actions for doing such a ridiculous thing. Non-Obama voters seemed as if they they were forced to be defensive over the whole issue. Perfect messaging for the time it was. Three words and a few themes based on the susceptibilities of a group literally made an American President. This was a game changer. The attitude or mood of those that were affected in the target audience equally had their behavior changed in some way. That campaign created unity of people that had never been unified.

I wish all those dreams had come true and I wish the unity had lasted. Rather than people feeling more alienated by civil unrest and corruption we can still unify our pragmatism and not our fantasies to build what we dream for and not just make a wish list.

Slow down and think. Please.

How cool is THAT!?

Now you see what your intellect has been reduced to. Can we all change? Can you tell others to slow down and think? Will you share what you’ve just learned? Will you actually do it? Please at least consider passing the word and telling others.

People manipulate all of us and we allow it because, in fact, when a person is comfortable they can afford to be ignorant so long as they are comfortable. Appealing to “comfort” is the best way to exert control and keep people ignorant. Reading has become too uncomfortable so we get our news from memes and I can bend your feelings at-will with a hashtag. How crazy is THAT!?

Where will it end? #imaginethefuture