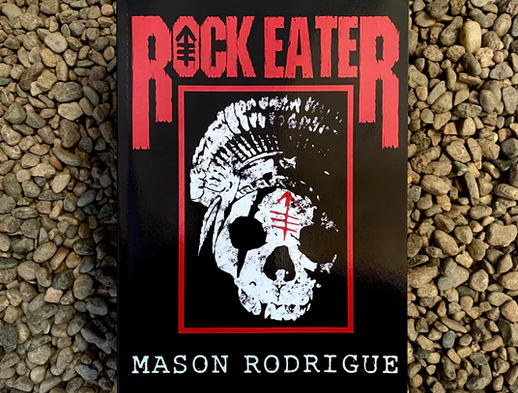 I met Mason Rodrigue for the first time outside an airport in Missoula, Montana in the summer of 2021. He had just quit his full-time job to come talk books with me and a few other veterans at the first annual Patrol Base Abbate Book Club Retreat. The retreat was only four days long and he made it clear to me he had no plans past those four days. Fortunately, he ended up clicking so well with the retreat staff that we kept him on as logistical support for every retreat that followed that summer. That’s the kind of person that Rodrigue is: he lives life at a belt-fed, cyclic rate.

Rodrigue began posting poems about his experiences as a Machine Gunner in the United States Marine Corps on his Instagram page, deadgunnerpoetry (Originally anonymously as WarBoy) in June of 2020. In less than two years he has garnered a steady and loyal following. The release of his first collection, Rock Eater makes it easy to understand why.

These poems have a sense of urgency. There is a beating heart at the center of each one. They don’t feel written so much as scrawled on a cardboard flap torn from an MRE box on the hood of a HMMWV somewhere in the never-ending desert ranges of Twenty-Nine Palms.

Listen to me, they say, because I have been there.

The collection is organized in a linear, chronological format. Each section advances the reader through a different phase of an enlisted Marine’s career. What we get is an intense and candid exploration of what exactly the title of Marine means. For Rodrigue, it appears to be an elusive and ever-changing definition.

The collection begins with enlistment and the Delayed Entry Program, followed by boot camp, then the first duty station, then the first deployment, and eventually, the transition back to the civilian world. The poems take the form of everything from boot camp ditties (“Scream”) to essential infantry knowledge (“What’s Your 9-Line?”, “How to Spot an IED”) to longings for home, love, and friends who are no longer with us.

For a writer who openly admits he has only been writing for a few years, Rodrigue displays an incredible amount of self-awareness and honesty. Where so many service members will claim to have only hazy recollections of what that first year was like, vague notions of boot camp or their early days at their first unit, Rodrigue seems to remember it all. For better or worse. He lingers in those moments and forces readers to stay there with him. Fragmented blurs and bright flashes of memory become poignant portraits of what it was like to serve on the backend of the Global War on Terrorism.

But while many service members may shy away from the remnants of their former identities – those shadows lingering in the background – Rodrigue leans into his memories with a surprising amount of authenticity. What we are left with is a compelling portrait of a writer who refuses to let his past be erased but who is also willing to move beyond it to whatever is next. Rodrigue’s willingness to indulge in these “lesser” identities marks an important step forward for veterans everywhere. Rock Eater sets the example to break down the facades of the modern United States military veteran for something more honest and genuine.

Michael Jerome Plunkett is currently serving in the United States Marine Corps Reserve. After working in the financial industry for Fidelity Investments and Morgan Stanley for several years he began pursuing fiction writing full time. His writing has been published by Dead Reckoning Collective and The Havok Journal. He is a candidate in the MFA Program at the College of Charleston in South Carolina where he received first place in the 2021 MFA Creative Writing Prize in Fiction. He also leads the Patrol Base Abbate Book Club, a non-profit that offers free-of-cost retreats to veterans with the goal of helping them transition to civilian life.