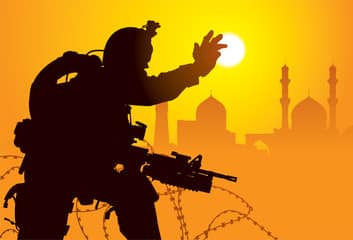 Editor’s Note: The below article is an excerpt from the book No Shit Here I Am: A Soldier’s Stories of Life During and After the War on Terror by Jarrod L. Taylor.

It was around 1500 when we received a call that 2nd platoon was in contact, and their Strykers were running low on fuel. We were going to move up and conduct a relief-in-place. Now it was our turn to get in on the action.

When we arrived, 2nd platoon had established a perimeter around a disabled Bradley Fighting Vehicle. It had been damaged by an IED and was waiting for a recovery vehicle. The crew was okay, and they were still shooting. They just couldn’t move. We parked our four Strykers around the Bradley and waited. Things were quiet for about 15 minutes. Then we heard shots. We started hearing rounds striking the side of our vehicle. My gunner saw a single gunman firing an AK-47 from behind the shell of a white sedan. It was almost completely stripped. The only thing left was the unibody. The trunk lid, hood, windows, engine, tires, and the entire interior had been stripped away. It sat about 50 meters down a side street that we had just turned onto. Sergeant Taaga tried to engage with our mounted M2 .50 caliber machine gun. Our vehicle was originally assigned a Mk 19 automatic grenade launcher, but they’d given us a .50 cal. for this mission. We hadn’t even had an opportunity to test fire this machine gun, and it malfunctioned when we needed it. Sergeant Taaga tried several times but only managed to fire a few single rounds. Finally, he got a short burst of rounds put through the gunman’s cover. We never found out if he was hit, or if he simply fled. There were plenty of holes in the car’s shell, though. At the same time, Frolo called out contact to our left; Jimmy called out contact from the rear, and our Lieutenant’s vehicle began shooting to our right. It was our first contact, and we were taking fire from multiple directions. It seemed like it was coming from rooftops, windows, and the streets.

The NCOs were all calling out contacts to our lieutenant, who was in vehicle Bravo 1-1. Leo and Sergeant First Class AB were calling out different distances and directions to enemy combatants who were firing on us. After a few minutes of this, I got a call from our lieutenant, call-sign, “Maggot-6.”

“Maggot-2, I’m going to need you to dismount your squad and try to find a way to get onto one of these rooftops. We need to get to high ground, so we can get an advantage over these guys. Over.”

I slipped down into my hatch and told my squad that we would be getting out of our armored vehicle under fire. To my surprise, they were all excited about it. Even the new guy, Jesse Caballero, who was fresh out of basic training and already nicknamed “Cowboy,” looked happy. Cowboy was actually assigned to 1st squad but was working for me while Staff Sergeant Heckman was on leave.

Sergeant Taaga dropped the ramp on the back of our vehicle, and we ran out into the street. There was smoke in the air, and the streets were filled with trash and sewage. The smell of rotting garbage and gunpowder burned our noses. There were two- and three-story buildings with storefronts on the first floor on both sides of the street. They were bullet riddled from past battles. There were more stripped out cars and even a dead donkey that had been caught in the crossfire earlier in the day. It was what war is supposed to look like. It seemed like a scene from a movie. Frolo began moving up the street looking for a way into any one of the buildings. There were tires burning about 150 meters up the road in front of us. Our lieutenant’s gunner, SPC Eichler, was taking out insurgents with his M2 .50 caliber through the thick black smoke from the tires.

Under his covering fire, we moved up the entire block. All of the storefronts had metal gates or roll-up overhead doors. Frolo tried to shoot the locks off a couple, but they wouldn’t give. A burst of AK rounds zipped past us, and I turned to look at the men behind me. My two newest soldiers looked at each other, then at me, and smiled. They were loving every minute of the action. Cowboy pointed out some people who were running away down an alley. I asked if they were armed, and he said no. I sarcastically asked what he would be doing right now if he didn’t have a weapon. He got my point, and the civilians disappeared out of sight.

When we reached the end of the block, there was still no entrance. Sergeant First Class AB called Carpenter on the radio and told him we needed a door. He came to our rescue and crashed our Stryker vehicle straight through the front of the building. It made a tank-sized hole in it and should have given us room to get out of the gunfire. Unfortunately, that particular shop was filled with tires in stacks from floor to ceiling. We still couldn’t get out of the gunfire on the street.

I moved my squad further up the block, and we rounded a corner into an alley. Frolo ran up to a metal door and kicked it open. Inside we found an old woman in a panic. She was frantically trying to get us to look at the identification cards that were hanging from lanyards around her children’s necks. We pushed her and the kids into an interior room and pulled the door shut. My two teams quickly searched the home. There was nothing to be concerned about, but one dark little room that I checked was filled with young women and some very small children. They were huddled in a back corner looking terrified. I jerked the door open and checked the room with the tactical flashlight mounted on my M4. Again, it seemed like a scene from a war movie. I put my finger to my lips, making the shhh sound and motioning for them to stay low.

As I pulled the door shut and turned around, Jimmy and I both saw cement steps leading from a courtyard to the roof. Unfortunately, we were looking through a narrow gap between two walls. We could see a door at the base of the steps and realized that it opened into the alley that we had come in from. It was barred from the inside.

Iraqi buildings, especially in the overcrowded streets of Sadr City and its surrounding neighborhoods, are nothing like those found in the United States. The homes are connected like townhouses, but sometimes there are doors connecting upper floors, and the flat rooftops are connected. City blocks have homes that open to the streets, but there are others that are completely within the interior of the block. Those interior homes have street access through small courtyards or narrow passages. It can make a city block seem like a maze when trying to search a certain area or find a specific home.

There was no way to break through that door from the alley with what we had on us, so I had to figure out how to get someone through this narrow gap between the walls. We had to get that door open so that shooters could reach the rooftop. Frolo suggested that we make one of the kids squeeze through and open the door. I had a three-year-old son at home, and there was no way that I was going to send a child to open a door when there was a firefight taking place right outside. I dropped my helmet and unfastened my body armor. I pulled it off over my head and laid it on the ground in the courtyard. I placed my M4 on top of my gear.

Jimmy looked at me like I was crazy and said, “Are you at least going to take your pistol?”

I grabbed the 9mm from my holster, sucked in my stomach, and squeezed through the space between the walls. I was barely able to fit through, but I did. As I headed for the door, I passed by a small window, and then turned quickly with my pistol ready to fire. I made the turn and thankfully hesitated. Frolo was standing in the room on the other side of the open window. His M4 was pointed at my chest and my pistol at his face. We each let out a sigh of relief, and I moved to the door. I called Leo to dismount his vehicle and enter the building with our company snipers.

As Leo’s squad came around the corner, I pulled the latch on the door and let them in. Once 3rd squad and our snipers were inside, I directed my squad to exit the building and enter the now open door to the steps. I squeezed back through the space between the walls and grabbed my gear. Jimmy was there waiting for me. After throwing all of my stuff back on, we ran out into the alley to catch up to the rest of the guys. Just as we reached the bottom of the steps, a burst of AK rounds zipped over our heads into the courtyard. We threw ourselves down onto the cement stairs and then hauled ass as soon as the firing stopped. We were completely in the open on those steps, and I have no idea how neither of us was hit.