(The following is the short excerpt [pages 37-9] from the Afghan War novel TATTOO ZOO. It’s during the first hour of the 48 spent with the fictional Infantry platoon the Tattoo Zoo. The platoon is in a remote village where they’ve escorted a Human Terrain Team—two civilian anthropologists and their interpreter. Female civilian anthropologist Robyn Banks is interviewing a villager, as her partner, former Marine Force Recon sergeant and now civilian Kyle Wolfe is nearby hanging with the platoon command at their MRAP.  As the clock is ticking down, tic, toc, tic, toc, Wolfe digs into his MRE . . . . . )

One spoonful into his mouth. Eyes closed loose in pleasure. Savors the taste and texture. Delicious ecstasy.

Rodriquez is amazed. “Shit, Kyle, you gettin yer rocks off?”

Wolfe’s eyes jump to something—

the man being interviewed suddenly hopping up to his feet—

another village man suddenly appearing from behind the conex shipping containers—

—the second man flings the red bucket he carries, drenching Robyn and terp Gulbarhar and the ground around them, as the interview guy flicks a Bic lighter and it’s suddenly all a gasoline explosion of fire— 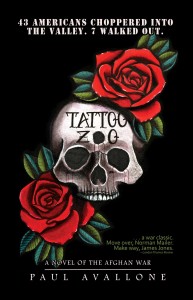 an M4 carbine snapped up to his shoulder, Wolfe fires clack clack clack clack clack, stitching the Bic lighter guy from neck to waist and immediately swings the rifle up to sight through the flames on the gas thrower who’s not there, gone back behind the shipping containers—

as both Gulbarhar and Robyn are in flames, calling out, the ground around them afire, and they can’t crawl out of it, with

Wolfe yelling at her “Roll! Roll! Roll, Robyn!” running to them, but it’s a wall of flames, and he throws blurred scoops of dirt and sand at the flames, to no avail, and

Pfc Holloway is the first to arrive, with a fire extinguisher from his truck, and Wolfe snatches it away from him and shoots its ferocious cloud of white powder through the flames and onto Robyn.

And Redcloud is here with an extinguisher from the Mrap, spraying terp Gulbarhar.

Wolfe grabs Robyn under the shoulders and pulls her from the flames of the ground burning, and Doc Eberly elbows aside Wolfe, away from Robyn, and unzips open his aid bag.

Redcloud orders Holloway, “Litters. Ponchos.” Orders the rest of the platoon through the handset clipped near his shoulder that runs to his small MBITR (Mbitr) platoon radio in its pouch low on his body armor, “Hold your fire, everyone. Eyes on your sector. Eyes – on – your – sector.”

Sniper Rodriquez, standing on the roof of the Mrap, is sighted in through his sniper rifle scope on the gas thrower fleeing fast across the first barren field. “P’mission t’ engage, Sarge!”

“Negative, hold your fire!” from Redcloud.

Lieut Caufield reinforces it. “I don’t see a weapon on him, Rodriquez, do you?”

The entire Zoo is at combat alert.

Turret gunners sighting down their weapons.

The others behind their M4s behind the open doors of the trucks, each man sighted out on his sector.

While the village men and boys are scattering far from the mosque, sprinting away, toward the compounds up on the higher terraces.

And Wolfe steps to the Bic lighter guy sprawled, his back against the rusted shipping container, the chest of his white shalwar kameeze man-jammie garb soaked solid crimson blood red, his throat gurgling blood, his eyes blinking rapidly with hateful terror right at Wolfe coming near.

Wolfe says something in guttural, violent Pashto that loosely translates as “See you in hell, you motherfucker,” and he puts the muzzle of his M4 right over the guy’s heart and clack clack clack puts three shots there.

Wolfe looks around at Doc Eberly tending to Robyn.

At Redcloud watching him right back.

Their eyes, his and Redcloud’s, meet behind their tinted eyepro.

Redcloud with the exhausted extinguisher above terp Gulbarhar moaning on the ground. Not a hint of any emotion in him, nothing. Just a blank flatness at Wolfe’s three-shot coup de grace into the man. An action for which Redcloud knows any court-martial board would punish Wolfe with life without parole.

Nothing, Redcloud could be a statue.

Wolfe glances up at Lieut Caufield up in the door of the Mrap on the radio handset to call back to the Cop for a medevac. Like with Redcloud a moment ago, their eyes meet behind their eyepro. Just a slight wince in Lieut Caufield’s upper lip. Slight, that wince, nothing more.

Wolfe gives a final glance down at Robyn.

What remains of her clothes is burnt tatters.

Blood already seeping through the purple-tinged white extinguisher powder of her exposed skin.

Black. Down to the bleeding muscle.

Her head, only patches of hair left.

Doc Eberly pulling an IV from his aid bag.

And he calmly steps between the shipping containers and hops up onto the rock wall.

He sights in his M4 carbine on the figure of the gas thrower a good three football fields’ distance away leaping up onto the third rock wall.

Settles the dark form of the man center on the peak of the chevron crosshairs of his Acog sight.

Forces the carbine up even tighter to his shoulder.

Lets out his breath slowly, ever so evenly.

Paul Avallone spent three-plus years in Afghanistan as a Green Beret then an embedded civilian journalist. Tattoo Zoo can be found very reasonably priced in trade paperback on Amazon.