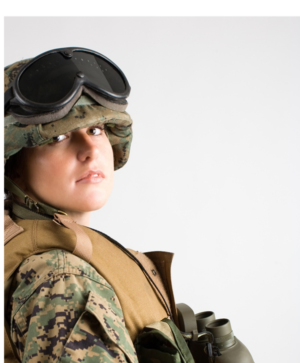 The author uses the same article to claim the Marine Corps “failed to take steps towards integrating women in Boot Camp, and most jobs/schools…” I guess my fellow linguists and I attended one of the few integrated training schools. Well, us and the Motor T crew, and the admins, and the Morse operators, and every other school that wasn’t related to direct combat. The CSM article says that combat schools remained closed to women, and that’s true, but it’s certainly not ‘most’ schools.

Our gung-ho Army girl also uses the CSM article to say that, “female Marines have remained fixed at the physical ability they were at about twenty years ago.” No. The CSM article says the “Marines largely remain where they were 20 years ago” in reference to integration in areas such as combat unit support positions. Nothing was written about female physical fitness.  I’m really starting to doubt my girl’s reading comprehension. Perhaps she wasn’t referencing that article when she made her claim.  But then I have to wonder where she got that information. Citation please! 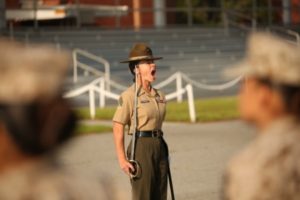 The author takes a whack at Marine Corps standards by claiming female recruits only try to match their strongest female competitors in fitness training because there are no men to compete with. The feminist in me is dying a slow death.

The author then points to some articles written by female Marine officers that discuss the disadvantages at which females are placed because they don’t compete with men. No. Kyleanne Hunter’s article is about her training at Officer Candidate School (OCS), which is gender-integrated. She did compete with men; she did better than men, and her female platoon commander cut her down for it. She continues by describing similar experiences where she was expected to perform at a lower standard.

Kyleanne Hunter’s article is an example of VERY poor leadership, and an argument for holding women to the same standards as men, not an argument for integrating training in boot camp, at least not without further information. LtCol Kate Germano’s New York Times piece (attached to the bottom of our author’s linked article) is a great piece on the need to hold female recruits to higher standards. I couldn’t agree more.  But it’s hardly a strong argument for integration. As a matter of fact, the LtCol discusses the record-breaking year for rifle qualifications 4th Battalion enjoyed in 2015. A plan to increase the rate of qualification by female recruits was successfully implemented and it was done without requiring them to compete side-by-side with males.

The next paragraph in the Havok Journal article is a hit at the quality of training received at Parris Island. The author claims it is always undermanned because it’s the only place where female recruits are trained. Not only does she fail to provide a citation, she also seems to think that ONLY female Marines train there when it is actually one of two bases that train male recruits. Next, she says that male Drill Instructors (DIs) are not allowed to train females. The females miss out out on mentoring and training by males and the males miss out on training and mentoring the females, leading to failure in the fleet.

First, my platoon received instruction in rifle manual from a male DI, there were men instructing us on the rifle range, there were men instructing us in the classroom. Second, even if the training and mentoring were completely segregated, which they are not, male and female training is integrated right after boot camp in Marine Combat Training (MCT) and in MOS school as well. There is plenty of interaction between men and women before they arrive at their duty station.

Her next bit of god-awful misinformation asserts that men arrive at their duty stations “woefully unprepared to work or train with women. They do not know how to interact with women, how to train and correct women, and how to be trained and corrected BY women.” I guess these men grew up in a male-only household where they were home-schooled and completely sequestered from all female contact before going to boot camp and then being thrust into a situation with a completely alien gender.

No. The truth is that male Marines have some inkling of how to interact with women. They probably had a mother, sister, or teacher correct them, train them, and show them that females are not aliens. Let’s give them some credit.  And let’s remember that, once again, men train with women right after boot camp.

What really gets me about this article is the force of confidence with which the author speaks on a topic she knows virtually nothing about.  It’s convincing if you don’t know any better. Not only is she ignorant about how men and women train in the Marine Corps, she keeps making an argument for integration based on higher training standards. One does not require the other.  I have absolutely experienced strained interactions with male Marines because of the lower standards. It’s a problem. It’s sexist. It needs to be addressed.

But, I wonder how many Army females experienced something similar because of the Army’s lower standards for women in physical training, something the author fails to address. How many female Army recruits meet the male standards? How many score a perfect based on female standards? The Marine Corps is not a perfect place and there is plenty of room for discussion on where it can improve, but if you’re going to have that discussion, make sure it’s an informed one. More importantly, make sure your opinion is even remotely related to the point you’re trying to make.

This article is the author’s personal opinion and does not reflect an official point of view of the US Marine Corps or the Department of Defense. This article first appeared in The Havok Journal 18 July 2018.