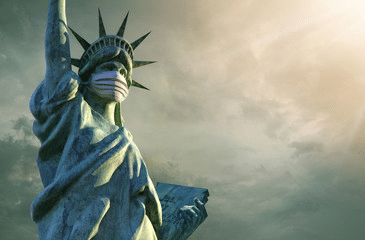 America is over COVID-19. There’s no denying it. And the sooner everyone realizes that, the better.

I don’t mean “over it” in the sense that everything is better now and things are like they were before because that is clearly not the case. The disease is still spreading, albeit considerably more slowly than predicted, and people are going to continue to die from the Chinese coronavirus and its complications. When I say “over it,” I mean it in the sense of “we played your silly games, now it’s time to move on.”

All around the country, more and more Americans are defying “stay at home” orders to do things like work, party, pray, protest, go to the beach or the barber or the beauty salon, or if you’re rich and famous (and totally tone-deaf) to toilet paper their rich and famous siblings’ houses. Basically, they’re getting on with their lives, with or without the government’s permission. And with the exception of a few outliers, there increasingly seems to be little that the government can, or at least will, do about it.

“Significant Civil Unrest”
The massive increase in traffic that I’ve noticed on the drive home from my “essential” job the last week or so, a situation that is repeating itself across the country, is only one of many indicators that Americans are ready to put COVID-19 fear in the rearview mirror. And they’re done asking nicely about it. Several states, such as Florida and Georgia, are rapidly re-opening. But in states that have been slow to get back to business, acts of civil disobedience are springing up as individual lives and livelihoods are threatened by government-directed lockdowns. Here are just a few examples from across the country of re-openings, and resistance to remaining closed:

-Armed protesters in Michigan occupied the statehouse in defiance of Governor

-In New York, West Point cadets are returning to school for graduation.

-In Florida, Disney World is re-opening.

-Georgia re-opened for business, and despite some really gross Georgia’s numbers appear to be holding

-In South Dakota, they never instituted social distancing in the first place.

-California protestors organized a “mass re-opening” of their state’s economy.

-And in Hawaii, where I live, the commander of our state’s National Guard, Major General Kenneth Hara, literally issued a public warning about the potential of “significant civil unrest” and rioting if restrictions remain in place. 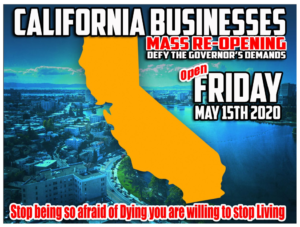 So, What Now?
I happen to believe that General Hara is correct, there will be “significant civil unrest” if this situation keeps going, and not just here in Hawaii. Unrest and discontent will continue to grow, and law enforcement will be increasingly unwilling to enforce the highly unpopular laws associated with COVID-related shutdown orders. That, of course, will encourage more people to break the law, and so on and so forth. The lockdown is in a death spiral, and the people aren’t going to take it much longer. If they’re smart, politicians at the state level will get out ahead of the “reopening” bow wave before their cozy little ships get swamped by the tsunami of their constituents’ discontent.

Removing the government’s restrictions on movement and trade isn’t just about the money, either. In addition to the civil disobedience mentioned above, COVID-19 restrictions are also contributing to an increase in suicides, domestic violence, drug abuse, alcoholism, petty crime, and other issues. Some individuals with chronic illnesses are dying because they are either scared to risk a coronavirus infection by going to the hospital, or are selflessly putting off care to let their doctors see other patients… many of whom never materialized because the infection rate was so much lower than expected.

The trick here is finding the balance between protecting the population from the worst of COVID, while not completely destroying the livelihoods of everyone who’s not independently wealthy or not drawing a fat, secure government paycheck. That’s not easy to do, and I don’t begrudge state and national-level decision-makers the enormity of the task. These are hard choices, but that’s why they get paid the big bucks… certainly “bigger bucks” than the millions of Americans who are now unemployed as a direct result of COVID-19 shutdowns.

But the terrible truth of this situation is that there are people whose interests are served by keeping America on lockdown. Some of those interests are legitimate, but the dirty, unspoken truth of the matter is that there are many people who see the economic turmoil wrought by COVID-19 as the one thing that might actually prevent Donald Trump from serving a second term as President of the United States, and therefore want to see it continue. 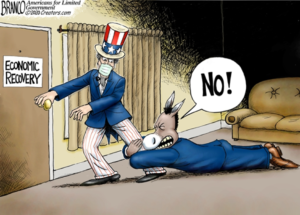 But even if we assume away all ulterior motives and just look at the facts, we see that the lockdown has served its purpose: the “curve was flattened,” the nation has pushed COVID-19 into a manageable box, and it’s time for all of us to get on with our lives. There is nothing risk-free about living, and as we’ve seen time and again, you’re not completely safe even in a total lockdown. 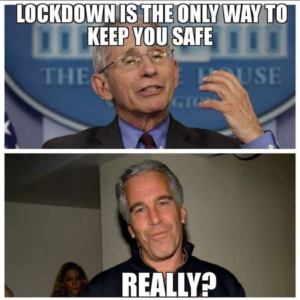 The curve is flattened. The worst is over. And the economic and personal toll of continuing well-meaning (?) lockdown policies isn’t worth it, on a national or a personal level… even if it is in the purpose of defeating Donald Trump.

Wake up, and open up America.