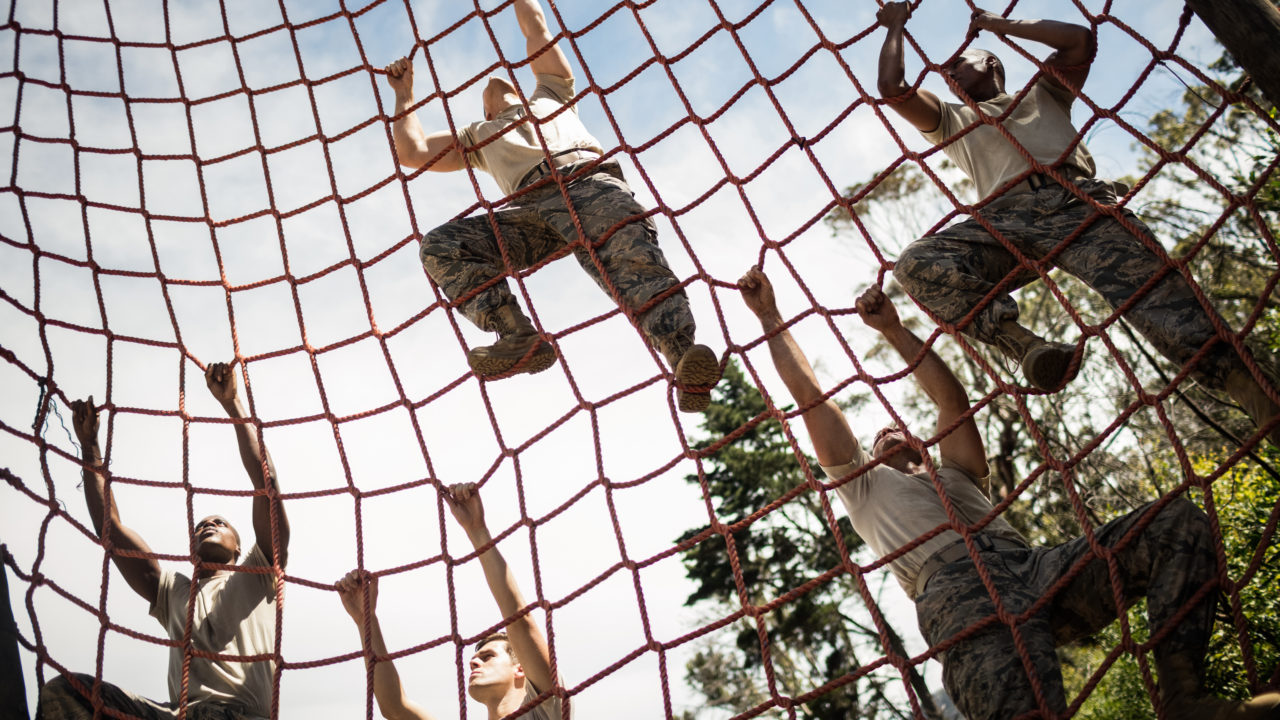 I have always joked that in order to promote in the military as an enlisted soldier you only need three things:

Like most jokes what makes this funny is that there is a hint of truth to it. Having a fresh haircut shows a certain degree of discipline, showing up early shows courtesy to superior officers, and having a good physical agility score shows that you are capable of being more combat effective… in theory. Herein lies the problem with the latter of these metrics; the Army PT test is an absolute joke. It does not come close to creating a more effective soldier.  Before I go any further please allow me to give you a little bit about my background.

I have been an owner of four different gyms. I have well over 10,000 hands-on coaching hours in Olympic weightlifting, swimming, biking, running, and CrossFit. I have delivered over a dozen seminars on the biomechanics of running and competed as an elite athlete in three different sports. I am three classes away from a degree in exercise physiology and currently hold over half a dozen professional coaching certifications. Prior to this, I served as a medic with the 3rd Ranger Battalion. Prior to that time, I was a firefighter in Arizona.

I spent months preparing myself for the physical rigors of basic training. By the time that I had graduated, I gained nearly 13 pounds and was slower and weaker than I had ever been. Why? It is my opinion that military physical training (PT) caters to the lowest common denominator. There are many people that use basic training as a means to get into shape. This fact makes it difficult to progress the ability of service members that start day one with an established fitness level.  Instructors spend an exorbitant amount of time just trying to get people capable of doing the minimum standard that everyone else is left behind.  Imagine if you showed up to college and on your first day half the kids couldn’t even read. How much do you think that you would learn while your professor goes over the difference between a verb and a noun with a group of 18-year-olds? This is the current situation in the U.S. Army.  We simply do not require enough to enlist.  This is taken directly from USArmyBasic.com:

If you are a 20-year-old male that wants to be in the United States Army and you can’t do 35 push-ups in two minutes before you leave for basic training, you don’t have any business joining the military. I am in no way saying that a push-up is a comprehensive indicator of a soldier’s ability to function in war or even a very good test of overall fitness but for the love of Audie Murphy be ready on day one! The military is not intended to be a fitness regime; it exists for one primary reason: to win wars. There is entirely too much hand-holding going on and as a result, we have a less effective combat fighting force. Personally, I can’t stand it when people sit back and complain about something without giving a reasonable solution.  So here is my professional opinion as to how to create a more combat effective soldier and in turn increase unit pride and readiness…

The current test consists of three pretty non-functional events. Rather than preparing for what will actually be asked of a young soldier in combat, time is spent cramming for this specific test the way a college student does. Cramming for a test is not the way to learn the material and it sure as hell isn’t the most effective way to prepare for combat. Never, not once, in my three combat deployments as a Ranger or the time that I spent as a DEA FAST team medic did I ever do anything even remotely close to any of the three events in the Army PT test. I’m not saying that running and push-ups are not valuable, just that the way they are tested is garbage.

By changing the way the test is administered we change the way people prepare for it. Instead of one single test, I suggest that there be multiple tests, of which you never know which one you will have to complete. Just like combat, you may be running, you may be jumping, you may be walking a long way, so you better be prepared for all of it. Keep in mind that doctrinally the APFT is there to give the commander a snapshot of his or her unit’s physical readiness. Here are some samples of PT tests that could be implemented:

Like the current Army PT test, each would have a sliding scale for points awarded based on performance. The day before the test you draw, at random, one of the above events and are required to perform it to standard. Soldiers then do not become specialists in three movements; rather focus on a much more well-rounded level of fitness. This is in no way a complete list of testable events. I fully understand that one of the reasons that the Army PT test is the way that it is is due partially to the fact that it requires absolutely no equipment to complete. The argument could be made that not every base has a pool or that having 30 people doing a 5RM deadlift at once would be very difficult. I call bullshit on that excuse.

I would say that during basic training you should have to complete one of these tests every Monday morning. A platoon of 40 soldiers would have approximately 8 people doing each event. Each event must be completed (and successfully passed) prior to basic training graduation. Having one soldier complete their 5 rep max test at a time would require that you have a couple of barbells to warm up with and a few hundred pounds of plates.

Step 3.)  Hold people to the standard and set real consequences for those that do not comply

This seems simple to me, what the hell is the point of a standard if people are not held to it?  Once you are at your unit you are required to take one of these tests each month.  Fail the same one twice in a single year and you are gone. Fail more than three of your twelve tests in a year and you are gone. If you are sick or injured you have until the end of the month to take the test. The only exception is for those with a legitimate medical reason. This isn’t welfare; this is supposed to be the greatest military ever assembled.  Do you think the Spartans that fought at Thermopylae would have been allowed to march to the hot gates if they couldn’t pass a PT test? Be physically prepared for war at all times or find a new profession!

In Ranger Battalion the three worst letters you could string together were RFS. Being Released For Standards could include any number of things, but what it ensured was that the men of the 75th fell in line. We didn’t have tape tests and we sure as shit didn’t need courtesy patrols. Men took a great deal of pride in what they had to accomplish to be there and as a result, they made sure that anyone else who wore the scroll lived up to the same standards that they were made to adhere to. Physical readiness, neatness of dress, care of equipment, and courtesy to superior officers all come down to the same thing: pride. Have a standard that makes sense and then enforce the hell out of it, which is how you create an effective fighting force. That esprit de corps is then passed down the ranks, step out of line, and get kicked out. If you have what it takes to pass it is nearly impossible to not have an overwhelming sense of pride in yourself and your unit. NCOs with unit pride breed privates with unit pride. That is the strength of any great fighting force.