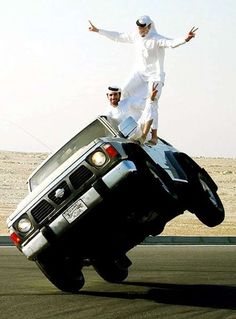 In reading the chapter “Street Terrorism” out of Pascal Menoret’s book, Joyriding in Riyadh, I found it striking how an authoritarian state tied to religious ulema could fail to tamp down and limit a socio-economic culture associated with “street drifting” and “joyriding.”

This form of youth rebellion, propagated mostly by the lower-class Bedouin population, involves recklessly driving “stock” vehicles, sometimes rentals and stolen cars, through the streets of the capital and other urban areas around Saudi Arabia.[1]

It is a well-established “counter-culture” that serves as a type of social “gateway drug” exposing youth in rebellion to vices typically expected to encounter anywhere at their age.  Yet, joyriding is a much different medium which young Saudis in the lower class have made all their own.

Joyriding is the launching pad for Saudi youth rebellion, with its “most fascinating aspect” being “its subversion of the stringent bodily norms promoted by the state, the police, the religious police, and the ‘suspicious eye’ (nazhra al-riba) that members of society turned toward youth.”[2]

It is a high-risk activity that is a product of rebelling against the state’s strict gender segregation, social divide between the hdhari (sedentary people) and lower class bduwi (Bedouins), imposed dress codes, and constant monitoring.[3]  Overall, it’s the pathway for lower-class youth to engage in mayhem against an authoritarian monarchy tied to a strict interpretation of religion that keeps this population largely on welfare programs, offering little chance for upward mobility in society.

Joyriding is an activity which provides an outlet to impoverished and lower-class youth a gateway into illicit activity.  A 2012 research survey conducted by the religious police found “59 percent of Saudi youth were engaging in ‘forbidden or reprehensible behavior.’”[4]

Of this “reprehensible behavior,” a 2004 survey of both middle school and high school students in the urban centers of Riyadh, Jeddah, and Damman found “45 percent of all students were involved in joyriding.”[5]  In addition to participating in the act of joyriding itself, the culture surrounding the activity is wrought with other “overtly deviant acts – in the Saudi context – [including] public flirting, homosexuality, or the consumption of drugs and alcohol became sites of contention against the strict behavioral and spatial order promoted by the state.”[6]

This behavior turned nightlife in Riyadh to an “impromptu red-light district” where casual hook-ups happened, in addition to the consumption of “Captagon,” an amphetamine illegally produced in Eastern Europe, and other mainstream drugs such as heroin, coke, and hashish.  These drugs were often washed down with al-kuhul al-watani, or “National Alcohol,” a local form of alcohol derived from dates.[7]

The lack of a future fulfilled by accomplishments and achievement through legitimate means is often deemed possible in the world of drifting and joyriding.  While making a name for oneself through typical social ascension isn’t possible for many, it can be achieved by becoming a muhajwil, the equivalent of a “tough guy” or “street hero” starting in their teens and sometimes going well into their thirties.[8]

They attain wasta (status) by becoming accomplished drifters able to take stock vehicles and conduct maneuvers at high rates of speed, often 75-120 miles per hour, through the suburbs and outskirts of Riyadh, all the while avoiding arrest by the police. Their status is often measured by the number of followers they accrue in person and, more recently, through followers on social media and YouTube.[9]

Like bacha bazi, or “boy play” in Afghanistan, social prestige and followers are often measured through the courting and attraction of younger boys.  These young, teenage boys are often taken along on “joyrides,” only later to be sexually exploited, and in more extreme cases, sexually abused.[10] This is likely attributable to the closed society, including extreme segregation of sexes, more so than the religion they either adhere to, loosely claim, or outright buck in their “joyriding” behavior.

A Saudi saying attributed to this type of behavior often highlights, “what’s prohibited is highly desirable (al-mamnu’ maghrub), and Riyadh was haloed with the lure of the forbidden.”[11]  In an environment, similar to the “Bedouin culture of competitive masculinity and chivalry,”[12] domination is often the name of the game.

The counter-culture surrounding joyriding is even complimented with a facet of much of Arabian folklore, poetry.  A poem highlighted in the chapter captured both the act of joyriding and some of the vices associated with the culture:

Sexy boys compete for you

Joyriding is a symbol of deviance and rebellion against the state and its strict monitoring, deemed “Saher” or “Vigilante.”[14]  This form of attempted traffic monitoring has largely been ineffective in stifling joyriding and its associated vices.  Thwarting “street terror” will be tough to address merely through law enforcement and prosecution because it is an expression of deeper root issues in Saudi society and culture.

To lower-class youth in the Kingdom, “joyriding was the tree that hid the forest of social despair and urban dereliction, the tip of an iceberg of poverty and violence that was rarely reported on.”[15]  As far as the lower-class participants were concerned, “the joyriding world, with its princes and parades, its accidents and its violence, was a macabre mirror image of Saudi society as a whole.”[16]

Until this rift is addressed by the state, including the underlying feelings of victimization and inferiority within its divided society, it is likely joyriding and the rebellion of lower-class youth will continue to terrorize the late-night streets of the capital.

Mike Kelvington grew up in Akron, Ohio. He is an Infantry Officer in the U.S. Army with experience in special operations, counterterrorism, and counterinsurgency operations over twelve deployments to Iraq and Afghanistan, including with the 75th Ranger Regiment. He’s been awarded the Bronze Star Medal with Valor and two Purple Hearts for wounds sustained in combat. He is a graduate of the United States Military Academy at West Point, a Downing Scholar, and holds Masters degrees from both Princeton and Liberty Universities. The views expressed on this website are his own and do not necessarily reflect those of the U.S. Army or DoD.