As highlighted in our article yesterday, David J. Carlson is a candidate seeking the Republican nomination to take on Democratic incumbent Al Franken in November’s mid-term Senatorial election.  I had the pleasure of doing a question and answer exchange with David yesterday and below is a copy of the dialogue.   Part one will consist of an introduction of David and his views on domestic policy, with part two focusing on veteran’s related questions.  I would like to personally thank David for the time he took to sit down with us at Havok Journal and wish him all the best this coming Tuesday.

First things first, David. Tell us a little about yourself and  why are you running for the United States Senate?

My name is David J. Carlson, and I was born and raised on the East Side of Saint Paul, graduating from Johnson High School.   After graduation, I attended the University of Minnesota-Duluth and studied political science and history.  In 2000, I worked in Governor Jesse Ventura’s office, and in 2002 worked for Secretary of State Mary Kiffmeyer. In Fall 2002, I studied abroad in Britain at Lancaster University, concentrating on foreign policy.  In 2003, I returned from the UK and continued my studies at UMD and became a candidate for the Marine Corps Officer Program. As the war in Iraq started up, I left college and enlisted in the Marine Corps Infantry in 2003.  I served three combat tours with the Personal Security Detail (PSD) for the Commanding Generals of 1st Marine Division and 1st Marine Expeditionary Force.

Upon my Honorable Discharge from the Marines with the rank of Sergeant in 2007, I transferred schools and graduated with a BA in Political Science from the University of Minnesota — Twin Cities; and was a Horatio Alger Distinguished American Scholar.  While still attending school, I became a candidate for the Minnesota House of Representatives in 2008.  In 2010, I founded Blue Diamond Strategies, specializing in security & the EB-5 program.

In 2012, I ran for the GOP nomination for the U.S. Senate, winning two congressional districts & receiving 44,000 votes from around Minnesota. I just completed an MS in Security Strategies and Technologies (MSST) at the University of Minnesota, as well as a Graduate Certificate from the Entrepreneur Bootcamp for Veterans Program (EBV) at Florida State University – College of Business. I currently teach at a high school in St. Paul and am pursuing dual Graduate Certificates in both Advanced International Relations and Border Security from Texas A&M University at the Bush School of Government and Public Service. 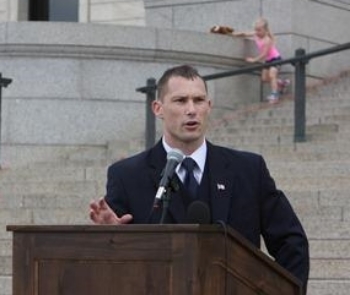 I am running for the U.S. Senate because I believe that our country is in desperate need of new leadership that is not cut from the same cloth as those that are currently ingrained within our government.  As a father of twin seven year old little girls, I want the best for them, and what I see happening is anything but the best.  As a veteran who has put my life on the line on top of a machine gun day after day riding throughout Iraq, I feel I have done my fair share of civic duty, and easily could leave it at that.

I turned down a $55,000 reenlistment bonus to stay in the Marine Corps, and when asked by the division retention officer why, especially with young kids under a year at the time, I responded that I could do more for the Marines and my country outside of the Corps than I could just being another rank and file Marine.  I didn’t know what that would be at the time, although I knew what I had been interested in and likely where my ambitions would lead me.

Those in power have had power longer than I have been alive, and likely many people who will read this; they also won’t be around to see the consequences of the decisions they are making for the rest of us.  There has never been an Iraq and Afghanistan vet elected to the U.S. Senate, and I think it’s about time someone born after 1973 who has the credentials to compete with men or woman twice their age has a place at the table to represent the roughly 55% of Americans younger than the current youngest senator.

I’m running for United States Senate to represent a new generation that has sacrificed in war for an amount of time not seen in our nations history, and has no voice in the most elite and exclusive legislative body in the world.  We need men and women who are not beholden to special interests and decades of deal making, but rather serving the people and the ideals that have made America a nation that men and woman voluntarily leave the comfort of their homes and families to travel into the unknown, especially during wartime as everyone serving has done, and serve this great country in our Armed Forces.

What is your core platform and how can it help benefit not only Minnesotans, but also the rest of your fellow Americans?

Each state only has two senators—the other 98 really do matter!  If elected to the U.S. Senate, I would be the eighth youngest in American history and first-born after 1973, and only senator under the age of 43.  As a Republican, I have remained true to my beliefs despite the party platform, which has earned me death threats every campaign I’ve ran in.  When we swear our oath to serve, we don’t do it to serve those who agree with us.  I supported marriage equality and opposed a constitutional amendment in Minnesota to make it unconstitutional for same-sex couples to wed; Minnesota was the first state in the union to shoot down such a ban.

As a straight male, I receive nothing out of that position except for sticking up for what I believe and I have done so gladly, even though the LGBT community as a whole has not stood with me to my disappointment.  I support women’s rights because I believe women have the right to decide what they can do with their bodies, and to the extent the federal law allows, the right to remain pregnant or not.  I was also the only Republican in my state to support the eventual anti-bully legislation that passed in 2014.  I have unapologetically stood up for our military and veterans, our workers, our schools, and our national identity.

I feel the Republican Party is on the wrong track and instead of embracing liberty, freedom, equality, and justice, we have became a nation that has in many ways reserved the best of America for the very few with the rest of us fighting for the scraps.

The Global War on Terror veterans make up 0.5% of the U.S. population–we are one of the smallest minorities in America.  Moreover, the characteristics that make someone join the military are the same ones the American public, most of whom haven’t served, want to see in their elected officials.  We need new leadership that is not owned, but has been willing to fight and die for what this nation represents.

If elected, anyone who knows where I stand can expect me to continue to stand for the same principles I ran on and not bend, waver, or sell-out for greater power, prestige, or wealth.   Quite frankly, I don’t care about that.   At the end of the day I want my girls to know their dad stood for something and was willing to fight for it and I was not for sale.

Congress right now is extremely divided and the tensions are reaching fever pitch.    If elected, what would you do to make progress despite such calamity?

I actually made a TV ad talking about working with those on the other side of the aisle, particularly the senior senator from Minnesota, Senator Amy Klobuchar (D-MN) to create a new, Republican-Democrat team that is rooted in Minnesota common sense called #OneNation.  I feel Senator Klobuchar is a reasonable, practical woman and leader who has the respect of many veterans, and I would hope she and I could find much common ground and could start to move the needle towards a more effective and bipartisan government that is efficient and effective and one we can be proud of, not lament.

By not electing men and women entrenched in corporate and special interest politics, we can start to have leaders who are not beholden and dependent on these individuals or entities for their success, along with their survival.  Because of my willingness to cross the part lines on issues I feel the GOP is wrong on, hopefully I can earn the respect of those on the Democrat side to come to the table with me with an honest effort at finding solutions that the American people can point to as progress.

Then we can begin to rebuild the trust and confidence in our elected officials and government that it once had.  Public service is an honorable cause and profession, but if all we elect are multi-millionaires with a severe lack of service to the nation, we cannot expect things to get better.  If the veteran community shows an apathy towards those who are on the front-lines of politics fighting for the community, veterans have little room to complain at the current situation because what are we doing to see that it changes?

The Republican Party, whether it is at the national, state or local level has a penchant for endorsing candidates whose extreme views and partisanship have caused a big disconnect between themselves and their constituency.  I look at your fellow candidates running against you and see more of the same.  Are there any issues where your stances greatly differ from your opponents that would help reach out to a broader demographic that is appealing to more Americans, especially our nations youth?

Yes, absolutely.  For one, I am the only Republican running for U.S. Senate or Governor in Minnesota that supported marriage equality.