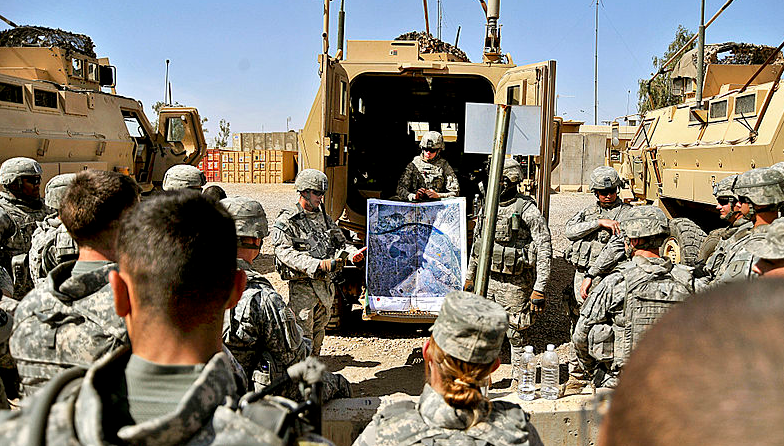 What is the difference between “information” and “intelligence?” Some may say that they are pretty much the same thing. However, if the overarching purpose of intelligence is to prevent surprise, provide early warning, and enable key decision-making, then information is separate from and inferior to, intelligence. In the F3EAD (find, fix, finish, exploit, analyze, disseminate) operational targeting process utilized by many Special Operations units, information is all but useless until it is exploited for intelligence purposes, then analyzed, and the resulting products appropriately disseminated. The information is merely the “what,” it is up to the intelligence practitioner to understand the “why,” as in why this happened and why this matters, and to provide the operators, particularly the unit commanders the information that leads to the critical decisions related to “what next.”

So is raw data or historical information useful on its own merits as a terminal intelligence product? In a word, no. If we accept that any system consists of input, some type of processing, and the resulting output, then we can see why “information,” when not contextualized and processed into something useful, can never become “intelligence.” Regurgitating data without providing the “so what” runs the risk of providing a history lesson instead of an analytical product, and will not be long tolerated by a commander who understands the role and value of the intelligence enabling function. An analogy may be useful to describe the importance of intelligence analysis to the terminal intelligence components of the F3EAD process (the exploit, analyze, and disseminate portions)- it’s time to make some orange juice. 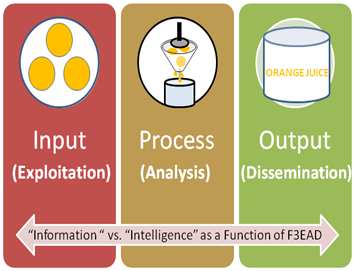 If we think of the information and data in the exploitation phase as the input (in this case, oranges), and the process as intelligence analysis (pressing and packaging the oranges), then the output in the dissemination phase is, of course, a can of orange juice. Providing information without processing it into intelligence is akin to picking oranges off the tree, and then handing them to your commander when what he’s expecting is a can of orange juice. You can repackage the oranges, put them in PowerPoint and make them look all nice, but at the end of the day they’re still oranges- and that’s not what you were asked for.

Handing oranges (raw data or historical information) to someone who wants orange juice (finished, useful, timely, predictive analysis) just means that the recipient is going to try to make the orange juice (intelligence) himself. Rest assured he can make orange juice himself using his hands and the nearest blunt object; but without a refined process (exploitation, analysis, and dissemination done by intelligence practitioners), the result is likely going to be messy and inefficient. It will also make your commander wonder what he keeps you around for in the first place. So if as an intelligence practitioner you can’t make “orange juice” for your commander and the operators you support, maybe you should start learning how to make the coffee for the rest of the staff…