HomeNationThe Syrian War is NOT the War We Should be Fighting

Our country is dropping some armament over Syria. We have already been bombing in Iraq (again).   Amazingly, we even have a Middle Eastern coalition supporting us. Well, my attitude toward this entire debacle is this—piss on Syria, Iraq, and the entire Middle East.

Whether anyone likes it or not, while we are in a war against ISIS/ISIL (not because we necessarily state such but rather they have said so), it’s not the war we need to be fighting. That doesn’t mean we need to burrow our heads in the sand but let’s face it, ISIS/ISIL really doesn’t have a snowballs chance in hell to do what they did in Iraq or Syria right here in the land of Old Glory.

There is another war needing to be fought and it’s not overseas. It is a war to fight an incredible epidemic, an epidemic so startling, when numbers are compared to that of the ongoing Syrian conflict, it will blow your mind.

To start with a comparison, let’s look at the numbers in Syria. From 2011 through 2013 (in a two year period), approximately 70,000 Syrians were killed in country.  Give or take 35k killed a year. What a shame.

We are a country never to back down from a war. Unfortunately, we don’t always pick the right war to fight. Sadly, going over Syria or even Iraq’s airspace and dropping bombs on them is not the war we need to be engaged in right now.

You know where I am going with this, right?

You guessed it. The real war needing to be fought is the one that takes more veteran lives than that involving actual combat–Veteran Suicide.

Given all of this, how do we fight a war pertaining self-inflicted wounds? The first step is actually bringing awareness to the situation.

Considering fewer and fewer Americans engage in reading these days (other than headlines), awareness must be brought to light from another medium—say, on the big screen.

I hate self-promoting articles and blogs but sometimes they are worth reading.  I’ll leave it up to you to decide whether this is one of those times. 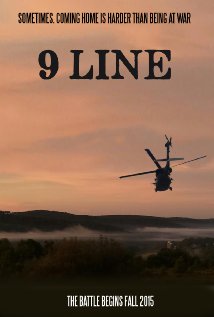 What is 9 Line? Well, if you are thinking about the military radio call for a medical emergency, you’re on the right track. And yes, the title of the movie is inspired by such.

9 Line is a movie that will showcase yours truly and also Leo Jenkins and possibly even other members of the Blackside Concepts team. But we are not the only veterans in the movie.

In fact, 27 year US Navy SEAL Mikal Vega will star in it. We have two former Marines, a few more Army, and even some spooks. Oh yeah, and the guy who helped produce Mission Impossible, The Patriot, Interview With a Vampire, and a ton of others, Mr. Paul Bernard will be assisting as Executive Producer along with another HUGE name we cannot legally reveal just yet.

You can check out our IMDB Page for the entire cast and crew which will be updated accordingly.

9 Line is a fact-based dramatic love story which exposes how PTSD impedes a veteran contractor’s attempts at a normal life after he comes home from war. As he struggles with his demons, something he left overseas haunts him. While at home, someone he loves fights to save him. And, the ending will leave many talking for weeks on end.

Yeah, I am doing a little self-promoting here but guess what? It’s for a reason.  Combating vetran suicide is not only a war worth fighting, it’s one that we should all support with totality.    We must pick the right wars to fight and in our humble opinion, the fight against veteran suicide needs to be our nation’s top priority—not saving the lives of non-Americans abroad.

Stay up to date with 9 Line news by liking our Facebook page. And tell all your friends and family to do the same too. You never know, we might actually start taking on a war with much greater meaning and, ending an epidemic once and for all.