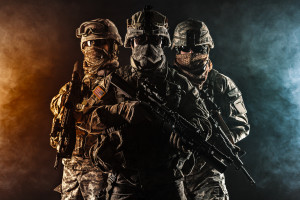 When it comes to terrorism, U.S. foreign policy, U.S. military operations or the true nature of Islam and the extent of Islamic radicalization, there are no shortages of opinions. As a survivor of the 9/11 attacks and a former U.S. soldier, I certainly had my own. But when it came to discussing Islam intelligently, I had more questions than answers. Frustratingly, most interviews I’ve read or seen were apologias for Islam; of course, a few were reflexively anti-Islamic shoutfests.

So it was with an eye towards conducting a challenging, clarifying conversation that I asked Sayed and Deen, two Muslim-American veterans, to sit down and talk with me. We bonded quickly, the way soldiers do, over jokes, bullshit and some shared bitching.  I was impressed with their thoughtfulness and their passion. But our goal was understanding, not agreement.  I found, in their answers, cause for both optimism and concern. This interview is hardly the final answer on many of these subjects — we spoke for three hours and we could have spoken for twelve.  Originally published earlier this year in nine installments, the hope is that we’ve at least managed to shed a little more light than heat on a range of subjects that sorely need it.

CPM: Thanks for being here, guys.  Let’s start by declaring our biases and bona fides upfront, so our readers can take them into account.  Deen, what can you tell me about your military background?

Deen: I was on active duty for three years. I was an ordinance officer. Went to Tikrit, Iraq for my first duty assignment, where I lost four people from my platoon, and five from my Battalion. I was injured by an IED two months into country. That was an eye-opener of what combat is and what combat is not. After that, I left active duty and worked in the intelligence field. After that, I worked as a defense contractor, started my own company, but missed the Army stuff. Came back in, went to the National Guard, and into a Special Forces Group. I was on the training team, got hurt, and ended up coming into the Reserves side of the house. I’ve been in for 13 years total.

CPM: And why did you join the military?

Deen: It’s a family tradition. My grandfather was a World War II fighter pilot for India — what is now Pakistan. In America, my uncle was a first lieutenant, an engineer officer. My aunt was a doctor, a captain in the Air Force. My cousin was enlisted and served as an MP. So, military service was something I planned to do.

But also, when you’re young, you watch a lot of movies. It kind of plants that seed, you know, and you want to do something cool.

CPM: Sayed, what can you tell me about your military career?

Sayed: When I was a kid, anybody and everybody that met me knew that I wanted to be a soldier. When my parents bought “Hooked on Phonics,” I vividly remember a picture of a soldier on the cover box. I knew I wanted to join the military.

When I got to college and couldn’t pay for it after the first semester, I realized that was my opportunity. The Army needed people and I needed to get into shape and get my life in order. I went to Fort Leonard Wood to become an MP, my first time being that deep in the center of the country.

Right after I finished, we got deployed to Iraq where we did correction operations. We were kind of shutting down shop there. We had some of the worst guys in Iraq, some of the guys who unfortunately became the elements of ISIS or Daesh or whatever you want to call them. We wrote reports on why those guys should not be released, but it was out of our hands…it was the government of Iraq … anyway, I digress.

I came back to the States and got the chance to switch over to Military Intelligence and I’ve been there ever since.

CPM: Deen, what is your religious and ethnic background?

CPM: Any sect of Islam?

Deen: The thing is, I kind of want to stay away from sects. I think that’s the biggest problem right now with Islam. As you can see, Islam is kind of going through its own turbulent time. I prefer not to get into whether I’m a Sunni, a Shia, or whatever. I would just rather say I’m a Muslim.

Sayed: I’ll go a little deeper down the rabbithole. I do have to say, Deen is actually right. At the end of the day, a Muslim is a Muslim — it’s up to the individual, and God judges. Sects are only minor schools of differences. It’s unfortunately become, through ignorance, a matter of contention and violence.

But, to your question, I’m also southeast origin Pakistani. My ancestry goes far back in the Middle East. I’m a Sunni Muslim, but in our teaching, it doesn’t matter. You’re one. The differences are a blessing in religion.

CPM: And politically, how would you define yourselves? Deen?

Deen: Technically, I am a registered Republican because you really can’t be an independent or a third party in this day and age. I wish that was the case, but generally, yes, I am a Republican, but I’m not a, you know…

Deen: …Right, not a down-the-line Republican.

Sayed: Where did you get this guy? He’s like my twin. I, too, am a registered Republican but same as Deen just said, I’m not hardcore.

CPM: When did you each come to the US?

Sayed: (laughing) Are you going to ask to see my birth certificate?

Sayed: Well, I don’t have the longform…

I was born here, a first-generation immigrant. My parents are familiar with the West. My father lived here, worked all over the country as an engineer. Before that, he was in Europe. My mom grew up in Europe, so they knew the European West. My mom really settled down here. My siblings and I were born here. I feel more American than anything else, honestly.

Deen: The same thing with me, I was born here. Being first-born, first-generation, has a lot of drawbacks, especially if you’re trying to get intelligence work. I know the government is working on it, but…

What do you think is the greatest myth or misconception that Americans have about Islam?

Deen: I went to a Catholic prep school for high school, so I had to take a religious class. But just because I took a religious class in high school, it doesn’t make me an expert on Catholicism. I do know a little bit about it, but what happens is that a lot of pundits on TV don’t even read the Koran but then say that they’re an expert. They get on TV and really misinterpret what the Koran is saying.

It’s hard to blame the average person because they’re just hearing that 30-second or two-minute clip, and they’re taking it to heart. The majority of Americans don’t really have any interactions with Muslims. Or if they do, the Muslims aren’t telling them they’re Muslims. So Muslims are kind of an alien culture to most Americans.

Also, a big misconception is that most Americans think, when you say, “Allah” that you’re speaking to a different God. It’s the same God if you’re Christian or Jewish — you just use a different name.

It’s partly the fault of the Muslims here, too. My parents, the older generation, didn’t really want or didn’t really try to assimilate in the way other ethnicities assimilate. A lot of the older generation that came here basically came to America because, either scholastically or socially, they were from the top tiers. They were either very smart and or very rich professionals — doctors, lawyers, engineers.

There were just about no Muslim blue-collar workers —policemen, firefighters, construction workers — that would interact with your average Americans.