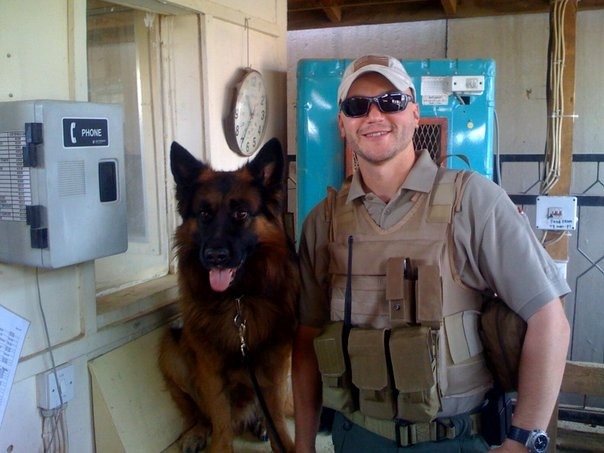 I knew since I was about the age of 10 years old that I wanted to be a soldier when I grew up. Both of my grandfathers were war veterans, Donald Bruce as a Navy Seabee in WWII, and John O as a Marine in the Korean War. Before I even graduated high school, I had raised my right hand and enlisted in the US Army as a Military Police Officer.

From 1993 to 1998, I served my country honorably but wanted to get out and make a greater impact in my community. I set my sights on becoming a civilian police officer specializing in K-9 and SWAT. Those were not easy goals for a 23-year-old just exiting the Military but I knew if I worked hard enough they were obtainable. I spent the next ten years in civilian law enforcement in Washington State. During that decade, I accomplished everything I wanted to do as a police officer. Not only did I become a K-9 Handler, but I also achieved the status of K-9 Trainer and Certifying Official for the State. In addition, I was in charge of our Honor Guard, a Defensive Tactics Instructor, a Field Training Officer, and I was a member of the SWAT Team. I had basically achieved all my goals by the time I was 33, and started to seek a higher purpose once again.

In 2006, I started my own company called K-9 Solutions Northwest. I worked hard training up a staff of five detection dogs and handlers specializing in narcotics, firearms, and explosive detection. While still employed at the Police Department, with my five additional duties, I was able to secure eight major school district contracts to help protect our children, all while finishing my four year degree in Security Management and starting on my Masters.

By the summer of 2008, my contracting side business was booming, and I was starting to see some real money coming in from my first job as the President and CEO of a small company. For me and my staff of off duty police K-9 handlers who would do several searches a week or callouts with our dogs, the profit margin was there. Then, I was recruited for the largest K-9 contract in the world at that time. Based on my skills I had from the military, police, K-9 and SWAT, a company called Blackwater offered me a position to be an explosive detection K-9 Handler and Protective Security Specialist in Iraq for the US Ambassador. This was an opportunity that I just couldn’t say no to. I took a 30 day vacation before I quit my job for the 28 day hands on interview in North Carolina. I successfully completed their extensive vetting process and accepted the position, leaving behind my job I worked so hard to obtain and all my contracts I had with the school districts. I basically sold everything I had amassed in the first 15 years of my career to spend the next several years overseas.

When I got to Iraq in the fall of 2008, activity there was still high. I was assigned to the Regional US Embassy in Al Hillah and there I had the opportunity to work on every tactical team that they had and handle all six of the explosive detection K-9s that was assigned to that region. In 2008, I was one of the primary dog handlers used in their elections clearing over 70 polling stations in just three days for the US State Department to ensure democracy was in place. In 2009, I did a tour in Afghanistan assigned to the advance detail for Ambassador Eikenberry. I also worked as a primary dog handler for that country’s elections in some of the most dangerous and austere areas of the world searching for roadside bombs and explosive devices. After over 125 Red Zone missions, I looked for an opportunity to return stateside and share my knowledge.

In 2010, I accepted a position to teach at the ATF’s Explosive Detection Canine Academy in Virginia. There I was able to develop a course curriculum, select and train dogs, and instruct federal agents, the US Military, and state and local police from all over the world. During my tenure there I estimate working with almost 2000 explosive detection canines from the ATF, CIA, FBI, NGA, Marshals, Homeland Security, all branches of the service, and international students from Mexico, Indonesia, Thailand, Jordan, Philippines, and Australia. After instructing so many students at the academy level for five years, I felt it was time to go back out into the field and be operational again.

In 2015, I transferred my government service from the ATF to the Department of Homeland Security. I became a Field Canine Coordinator for the TSA, managing a portion of the explosive detection dogs you see in the airports around America. It was refreshing to get back into the field to conduct red team assessments, large events such as the RNC or the Super Bowl, and help teams in the field become better at their jobs. In this position, handlers would report to me when their canine partner was experiencing health or medical issues. It was my job to retire them and schedule that handler for a replacement K-9. This is where I noticed that we, as the government, were turning our backs on these K-9 Heroes financially once they needed our help the most. I didn’t feel this was right so in March of 2016, while still a government employee, I started my own non-profit called Project K-9 Hero.

Taking $500 out of my own pocket to start this organization, I wanted it to focus on medical care for the over 2000 Police K9s and Military Working Dogs I have worked with in my 23 year career up to that point. That first year, it was hard to juggle my government job and advance the non-profit like I wanted. Even though I was working full-time, I was still able to raise around $50,000 in 2016 to help the first 12 dogs in our program.

In January of 2017, I knew if I ever wanted my vision for this nonprofit to come to fruition, I would once again have to take a leap like I did in 2008. So that’s what I did. I quit my government job, sold my house and most of my belongings, and set out on the road to change the world. My first book, “K-9 Flash Becomes a Hero” had just been released and I began reading it all across the nation. The synergy of our travels really started to make a difference, and in 2017 we raised over $500,000 for Project K-9 Hero and started to put our cause on a national level.

In 2018, Flash was named the Law Enforcement Dog of the Year in America. We appeared on the Hallmark Channel, Today Show, Headline News, and dozens of local news networks to spread awareness of our mission. Our number of program members were doubling and tripling at a very fast rate and we were paying medical bills for them all over the country by thousands of dollars a day. In 2018, we broke the one million dollar mark for the year and it wasn’t until that time when I started to take a salary for my job as the CEO starting in 2019.

All throughout 2019, I worked hard with US Congress to bring an idea I had for new legislation that would help fund the medical care for retired Police K-9s and Military Working Dogs. In November of 2019, I stood on the lawn of the US Capitol in Washington D.C. with our Ambassador at the time, K-9 Axel, while the K-9 Hero Act was introduced. It was a very proud moment for me to be able to see this vision become a reality. However, I am still working hard every day to see this act become a federal law. Additionally in 2019, we purchased 177 acres in Tennessee to construct the Project K-9 Hero Rehabilitation and Rehoming Facility. A place for heroes to go when they no longer have a home. It is at least a 3-5 year project that will require over $5 million dollars in fundraising from me and my team.

I am proud to say that 2020 has still been a very productive year for us, despite the challenges we all face. We wrapped up 2019, breaking the $2 million dollar a year mark in donations and we are on pace to achieve that once again this year. We have been able to still move forward with our Capital Campaign and the K-9 Hero Act. None of our employees or contractors lost any hours of work or were laid off. We increased our program by adding 40 new heroes in 2020, giving us a total of 110 to date that we have served or are still serving.

As for me, I remain the CEO of Project K-9 Hero and I am working on my Doctorate degree in Strategic Leadership. I am also the CEO of Paradigm Defense Concepts, CEO of K-9 Solutions International, and the Executive Vice President of the Blackwater Memorial Alumni Association. I still work with the US Government, holding several contracts as an explosive detection canine subject matter expert as well.

I wanted to share my Small Business journey for all of those of you who may have a dream like I did. For those of you who may be trying to decide if you have the courage to leap? I am here to tell you that with hard work and perseverance you can make it. Despite the challenges, the world brings us in the current times. The only person or thing holding you back from success is you!

Please take a moment today and every day to support America’s Small Business Owners because I will guarantee they all have a story similar to mine. They are the ones who have risked it all to follow their passion to better serve us. Thank you for taking the time to read my story and if you want to learn more about my passion check out my website at www.projectk9hero.org