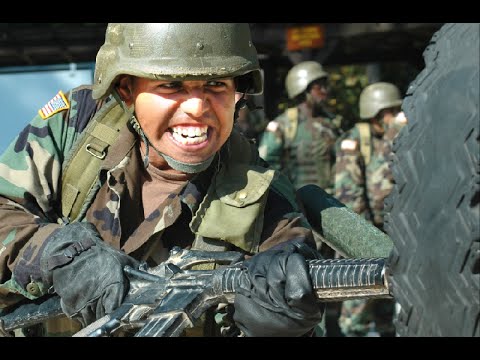 Like many fellow Havok Journal readers, I count as part of my military career a certain amount of what I have come to term “otherism”. Otherism is, simply, the conscious and willful separation between groups of people based on a characteristic. Recently, in view of other life experiences and especially in terms of political discourse in our country, I’ve started to self-examine the psychology behind the process. I wonder at what cost I and the rest of the American public have internalized a potentially unhealthy social practice.

I joined the military in late 1990, right as Saddam Hussein sent his armies into Kuwait and it became obvious that the United States Armed Forces, along with the coalition of the willing, were going to be asked to sort that out. It took no time, apparently, for this to become a motivator for us green troops. In basic training, we twirled, thrust, and butt-stroked our way through bayonet drills: “What makes the grass grow?” growled the drill sergeant.  “BLOOD!” we roared back. “Whose blood?” “IRAQI BLOOD!” (I can only imagine that Hannibal’s troops shouted that Carthaginian blood made the grass grow in their sword fighting drills.)

The use of otherism in the military is perhaps seen as a necessary shortcut to provide a moral justification for a young Soldier to pull a trigger and end a life. We can’t otherwise screen out those who would hesitate to consider the moral implications of killing another human at the crucial point when that action is exactly what is required for mission success, to say nothing of individual survival. In this way, this judicious application of otherism allows the warfighter to fight without crippling guilt or shame in the moment. For the aftermath, we have leaders and counselors and chaplains, and the like.

But I have a moral issue with otherism. It is ultimately a dehumanizing process that, when taken out of the extremely narrow context of combat, cheapens the human experience.

Ironically, it took several other experiences in the military to give me perspective on otherism. Two spring immediately to mind. The first was when my team deployed as an observation post above the Shiqal Valley in Afghanistan. We were overlooking a village where a Special Forces A-Team would set up a medical clinic within 72 hours. In our innocence, we blithely assumed that simply by using local clothing and vehicles, we would blend into an environment where the inhabitants were intimately familiar with everyone and everything within miles. The morning after we reached our vantage point, we perceived movement on the trail below us, and we went to 100% alert, expecting the worst.

Thankfully, nobody initiated contact. The intruders were a pair of local children, bringing two plates, one piled high with steamed rice and dates, and the other with what we were to learn was the last chicken owned by one of the village’s families. They laughed, called us Americans, and asked us to let them know if we needed anything else.

These were some of the poorest people I met in all my years in the military (which included deployments to the southern Philippines and Haiti); we were in a country that had no reason to be forgiving to outsiders, and yet their immediate thoughts were to be welcoming and hospitable, giving valuable resources to the newcomer.

The second experience hearkens back to my time as a chief instructor in a joint service school. One Airman ended up in parade rest in front of my desk. He’d failed to complete multiple assignments, twice had fallen asleep in class, and ultimately backtalked his instructor. Having found my rhythm as a stern and humorless disciplinarian, I felt I knew the best way to inspire this young man to succeed, like so many of his “other” kin. I thundered at him, “If you have any excuse on God’s green earth why I shouldn’t kick your ass right the hell out of my school, you’d better tell me right now!”

The student began to cry uncontrollably and his knees buckled. He blurted, “Sergeant, I got a girl pregnant and she wants to have an abortion. I want to marry her and do right by her. I can’t sleep at night, because I don’t know what to do.” His next words chilled me to the bone: “I think I want to kill myself.”

This was not a stupid other, I realized. This was a hurting, vulnerable person who needed my help. I had been ready to use a hammer on a nail, and that wasn’t what the situation needed. I was so willing to dehumanize this young man to solve MY problem, it blinded me to what HE was thinking and going through. My very next action was to get him out of parade rest and into a chair and to bring in some assistance from the chaplain’s office to help out. It was the most humbling experience of my career.

Otherism, in its tendency to dehumanize the “others”, has pervaded our culture, and perhaps has never been so discussed as in recent days. Mentions of racism, white supremacy, sexism, and classism wallpaper our national and local news. Just today in my small central Washington town, an employee of the sheriff’s department came under fire for posting a meme advocating running over protesters with cars, shared from a social media page with the word “libtard” in its title. In my subsequent discussion with the Sheriff, I shared my view that an office with a mission to serve and protect can’t be seen to deal in otherism. In other words, is it okay to NOT serve and protect someone based on their belief, or that they’re doing something illegal yet not life-threatening? What if the crime was not protesting, but jaywalking? Yet I don’t see anyone advocating the vehicular assault of jaywalkers.

Labels define others as others. We don’t see Americans anymore, but party affiliations, political persuasions, gender definitions, ethnicities, races, national origins, and even spoken languages as broad-brush identifiers. And as our bayonet drills show, it’s very simple, once that dividing line between you and an “other” is drawn, to slide into mistrust, hatred, vitriol, and even violence.

My life journey has brought me through a wealth of experiences that have clearly shown me the relative moral bankruptcy of otherism as a valid operating philosophy. In coming to despise its use in modern culture, I am led to wonder – and I invite others to explore within their own belief system – if by promoting it as a tool to train for combat, we are promoting an unhealthy tendency in our societal fabric by extension.

Aaron Parrott served 20 years in the Army with tours in Afghanistan, Haiti, and the Philippines. He currently works as a workforce development administrator for North Central Washington state. He may be reached at alparrott@gmail.com.

This article first appeared in The Havok Journal on September 18, 2018.