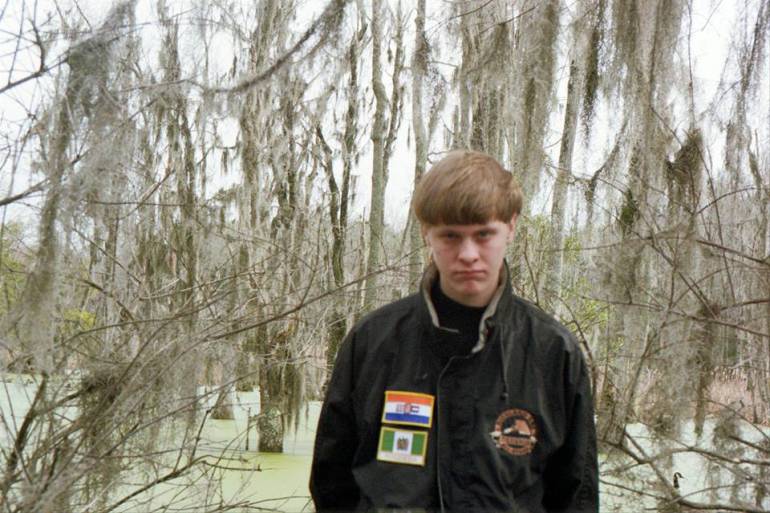 Nine killed in Charleston, South Carolina during Wednesday-night Bible study? All nine doing no harm to anyone and, in fact, welcoming and treating kindly the man-child who would kill them? The killer being captured within twenty-four hours, with such a preponderance of evidence against him that even the always-careful (of libel lawsuits) TV news media is not referring to him as the “alleged” killer but simply as the killer?

Remove the question marks above; they’re not questions, they’re facts.

Along with this fact: the killer acted out of hate and nothing more. Racist hate. Those killed were targeted solely because they were Black churchgoers—specifically because they were Blacks of the highest moral caliber who were without relation to the killer and had neither disparaged his Whiteness nor stolen his bread nor raped his sister nor in any sense done previous harm to him.

If there is any evidence that this evil man-child is not the killer, please, tell me quick, because I am about to say what so many of us are thinking but are fearful of expressing in polite company because we don’t want to be condemned as insensitive and mocked as troglodytes.

We agree, then, that he is the killer.

Now, because he was not killed on the scene and not killed upon capture, the killer will be treated by us in a manner that is disrespectful to the dead and their families. The disrespect begins when we allow him to live for more than two weeks, which in itself is two weeks more than he allowed the nine.

The evidence is there, present it, let him defend against it, send the jury into deliberations, have a panel of judges review the conviction for miscarriage of justice, erect the gallows, and the whole thing can be wrapped up in two weeks.

I am as firm a believer in the Fifth Amendment (due process) as I am the Second (keep and bear arms), but I believe that an instance of obvious and irrefutable guilt should be dealt with as quickly and lethally as the bullets that came from the killer’s firearm.

What, is there a reasonable line of defense that the young fellow is being confused with some mysterious stranger who that evening entered the church wearing an ever-popular Dylann Roof latex Halloween mask? What, are we going to have to hear for months on end physiatrists and attorneys and Dr. Phil types excusing the killer for his psychosis and insanity?

Let’s kill that insanity defense right now. The killer chose Black churchgoers at Bible study, not Black Hells Angels in their biker bar. Not Black Vietnam Vet bikers in their clubhouse. Not Crips or Bloods at a Saturday barbecue.

The killer’s choice was the opposite of insanity; it was common-sense rationality. He well knew that churchgoers would not be armed, and that the bikers and vets and Bloods would have filled him full of hollow-points before he got off his second shot.

Don’t you wish that one or two of those worshippers Wednesday evening had, as the killer fired his first shot, drawn their own concealed weapons and blown the worthless piece of sh– away? Come on, allow yourself a few moments to enjoy the thought that in the minutes afterwards, with the man-child scumbag laying on the floor, gurgling blood, with his eyes terrified and pleading, the armed worshippers then came over and kicked him in the face then pumped their remaining rounds into his chest.

That did not happen literally, and it will not happen figuratively for the next four or five or ten or twenty years that this killer will remain alive through endless legal maneuvers and our own society’s reluctance to kill killers. We will further disrespect the dead and their families by putting this imprisoned killer in a cocoon of protective solitary, where even his prison inmates have a better sense of justice than we do. Even they recognize the darkest depths of evil in the act of killing utterly innocent Wednesday-night Bible students. Ask yourself, how many hours would the Black prison gang allow this killer to remain alive in the general population?

Yes, time it not by the days but by the hours.

As for us, our society? The joker clown creep who killed twelve in Aurora, Colorado is only now on trial, three years after the killing, with no one even pretending that he is not the killer. The jihadist psychiatrist Army major who killed thirteen at Fort Hood in 2009 is enjoying three hots and a cot these six years later, as his death sentence is now meandering through endless appeals.

Do you expect different with this killer? As for me, I’d take a page out of the gun-regulation advocates’ own playbook, as they argue to redefine the words of the Second Amendment, corrupting “well regulated militia” and “keep” and “bear.” I would redefine the words from the Eight Amendment, “cruel” and “unusual.”

Two weeks due process. Pile kindling and firewood on the gallows. Plant a stake tall in the firewood. Tie the killer alive and undrugged to the stake. Let the families of the nine take their vengeance, with machetes and propane torches. With a particular emphasis on the genitals. Scalping and skin-peeling recommended. A match touched to the kindling. All in live-streaming video.

I can dream, can’t I? Vengeance aside, that video makes for a nice visual loop up front in the cerebral cortex of the next wannabe macho killer to warn him of what awaits his evil.

Unfortunately, the opposite is the truth: this killer won’t be killed. So, after this column and after politely answering reasoned comments, I am done with this story. I will not follow it in any way, not even to grieve for the nine and their families, because even in grieving I am reminded that I am part of our America that disrespects them in our undue respect for the killer.

Since I cannot change that nor change the laws, I choose to be optimistic that more churchgoers and bowlers and kindergarten teachers and bingo players and soccer moms will take this Charleston killing as a lesson and will make sure they leave their homes as I do every day, concealed carrying.

Paul Avallone spent three-plus years in Afghanistan as a Green Beret then an embedded civilian journalist. His unapologetically politically incorrect novel of the Afghan War, Tattoo Zoo, is available exclusively on Amazon.