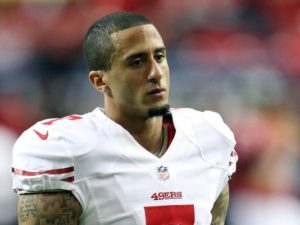 San Francisco 49ers quarterback Colin Kaepernick showed his displeasure for racism and oppression in America by sitting during the national anthem before a pre-season game against the Green Bay Packers on August 26, 2016.

CNN quoted Kaepernick on his decision, “To me, this is bigger than football and it would be selfish on my part to look the other way. There are bodies in the street and people getting paid leave and getting away with murder.”

Standing during the national anthem is proper etiquette. Social media posts continue to bash or support Kaepernick at a rabid pace, especially since continued his protest for a second preseason game.  Two observations are apparent.

First, his protest is bringing race relations between whites, blacks, and other peoples of color back into the forefront.  The social media ‘conversation’ is overloaded with pithy quotes and unintelligent memes.  There is no point in using photo editing software to superimpose Kaepernick’s face onto Osama bin Laden’s face.  It is equally inflammatory to use Kaepernick’s image and protest to say “F*** the police!”  In turn, police officers refusing to work due to Kaepernick’s protest is akin to a childlike temper tantrum.  Stop it.

Two cogent and opposing arguments on the subject are by New Orleans Saints quarterback Drew Brees and ex-Green Beret turned long-snapper Nate Boyer.  Thank you Drew and Nate, for showing us how to peaceable, respectably, and intelligently debate an issue.

Kaepernick’s method of protest is not the core issue; the core issue is racism. Kaepernick sat amongst the Gatorade coolers because of his frustration with racism and the treatment of people of color in the United States.

The second observation stems from the first. His method of protest is an issue for the San Francisco 49ers coaching staff and his football peers alone.  It is an issue of leadership.  This is not a situation for a butt-chewing or public embarrassment. This is a time for what my Vietnam-veteran father called “Mango-Tree Leadership.”

No, the name does not imply going out to the mango tree and physically or verbally abusing him.  It is a chat, a calm discussion, where a leader gives the gift of wisdom and experience to another person. A perfect example of mango tree leadership occurred before Kaepernick’s second protest.  Nate Boyer and Kaepernick’s teammate Eric Reid used Mango-Tree Leadership effectively, and convinced Kaepernick to kneel alongside his teammates during the national anthem.

Nate Boyer and Eric Reid showed us a leadership technique which should be used more often.  First, they acknowledged the concerns of another and gave themselves perspective on why Colin was protesting. Instead of yelling and berating, they heard Colin out.  They then offered their perspective on Colin’s protest, reminding him of his leadership role on the team and his status as a role model.  Finally, they came to a solution together where the country’s anthem could still be respected but his frustrations with racism could still be made known.

Two men, who cared about their country and their fellow professional athlete, solved a problem with leadership.  Imagine that. Well done.