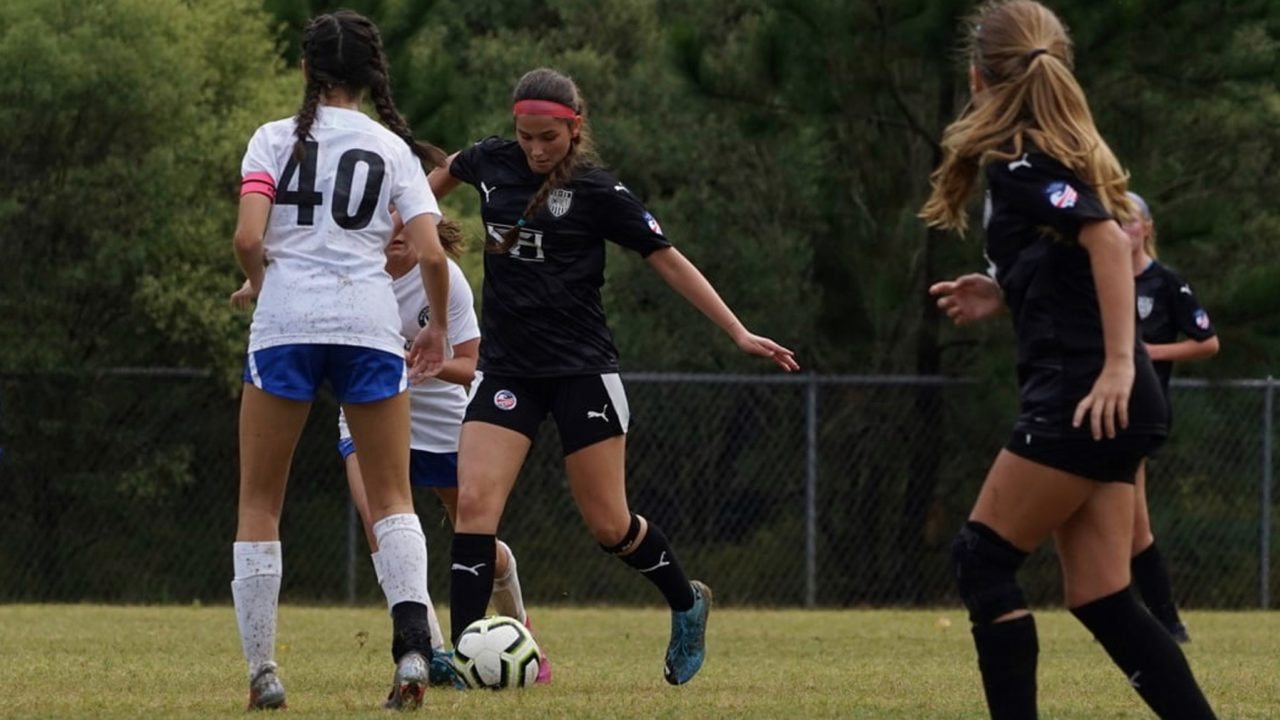 Over the past 40 years, I played soccer, coached soccer, and parented student athletes. Some days on the soccer field bring back a disappointment I feel because I watched a kid lose passion for the game.I love the game. It’s why I coach. I want the children I coach to have the same passion and love for the game that I do. Many times, it’s a parent sucking the enjoyment right out of the ball.

This takes me back to a game years ago. It was a typical Saturday game watching my kids play ball. During the game, I watched a parent bellowing orders to their child on the field and make hand gestures for runs. Their team was down, and the father on the sideline shouted to his kid to mark another player. The opposing player didn’t look like her mark. His daughter was openly annoyed.

This back and forth started with the whistle, and his criticisms and comments continued through the first half. At one point, she shouted at the sideline, ” Shut up dad”. His continuous stream of orders made the parents around him uncomfortable as his daughter’s face turned red. She began to cry. She was angry. When the game ended, she walked to her dad and unloaded a barrage of foul language that would make a sailor blush.

The result? She quit that day. She never picked up a ball again, and to this day, she hates the game of soccer. As a player, coach, and parent of four kids, I made mistakes as a sideline parent too. I still make mistakes as a sideline parent, but I hung my boots up years ago. I’m not my kid’s coach. It’s not my game to play. I am a parent on the sideline watching my child play. I believe there are a lot of reasons our kids play sports. The first is the enjoyment of the game. From teamwork to communication and self-analysis and fitness, sports provide hidden values in life if we let our kids play the game.

I stole a great reference article he likes to refer to from Youth Soccer Insider about parents controlling their kids on the field like GPS navigation. The article is from 2011, so this isn’t a new problem. As a parent coaching from the sideline, it’s a set of reflective questions. Who do I want my children to be when they grow up? Am I going to be there to catch them every time they fall or is the soccer field a place to learn from their mistakes?

As a player, I learned from my mistakes. Sometimes, it meant losing a game or not making a team. Mistakes are hard lessons to learn, but mistakes stick in our heads longer than success. If we make a mistake and correct it, it’s more likely to remain corrected and we feel achievement as an athlete for correcting it.

As a parent, we hate to see our kids make mistakes, but what’s the end goal? It’s to teach them how to think. As a coach, parent coaching from the sideline is one of the most frustrating parts of youth sports. If a coach wants to communicate something to a player and a parent is coaching them, who do they listen to? Their parent or their coach?

Maybe the coach told them to play a certain way. Maybe the coach told them to mark someone else, no matter what. If a parent gives a kid a different set of directions, they’re undermining the coach and their kid. When a kid doesn’t listen, they get the uncoachable tag, they move down a team, or they ride the bench. At the end of the day, there is no guarantee my kid even hears me. Maybe the other parents sitting beside me do, but do they want to hear me constantly controlling my child? No.

The best thing I do is enjoy the game. I’ll let my kid have their time on the field and enjoy the game too. In an article on The Postgame by Bruce Brown, he says: “Good athletes learn better when they seek their own answers.” I follow this philosophy with my children. When my child comes off the field, it’s his or her time to tell me about the game when they are ready.

This leads me to the second point, I let my kids tell me about the game. When my nine-year-old hops in the car and he’s ready to talk about the game, I ask him,” What did your coach tell you on the sideline?” Then I ask him what he thought he did well in the game and follow it up with what he thought he could improve upon. My focus isn’t on other players on the team. My focus isn’t on the referees. My focus is on how my child thinks they played.

As my children have grown older, it’s more interesting to hear them talk about what they want to improve and listen to them constructively analyze themselves. There is a huge difference in what my nine-year-old sees on the field versus my sixteen-year-old. Some days, it’s a struggle for my youngest child to think about what happened during the game, but I noticed, the more I ask him to tell me about the game, the better he is at thinking about the game. Also, he loves that I’m listening to him and interested in his thoughts.

Soccer is a thinking game. Many sports are. Understanding how to reflect on a game once it’s over is important in growing as a player. It’s an essential life skill. Self-reflection is such a key to growth in school, in your job, and life. Sports can teach this skill if we let kids learn to think on the field for themselves. After I listen to my kid discuss his or her game, then I like to follow the same pattern. When it’s my turn to talk, I focus on what my child did well on the field first because the first thing I want to do is catch them doing something good.

Tony Di Cicco was an amazing women’s soccer coach. He coined the phrase, “Catch them doing something good.” In his book by the same name, he emphasizes how to build on strengths and create a plan for addresses weaknesses. Maybe I noticed something they didn’t, like a good run or a solid pass. I can emphasize something we both thought they did well. Then I can take one or two points I saw that may need improvement and talk about them. Maybe it’s as simple as acknowledging that I agree with my child on what they saw that needs improvement. At this point, it’s a discussion. Your kid laid out a few key points. You laid out a few points.

In both cases, we started with what they did well. Pick out one or two critical points to improve upon, that’s it. It’s easy to move from what I can improve to how to improve if you’re in a discussion. Ask them what they can do to get better. Maybe they work on something that they are strong in. Maybe they work on something they are weak in. The importance is that there is a goal, and there is a discussion to get to an agreement on what the goals are. I like setting some goals for improvement and watching my child want to improve. Goals are something tangible, and I can praise reaching a goal, even if there are a myriad of items to work on. Set goals to improve, see them improve, and build confidence.

Finally, make the discussion about your child’s play. Don’t make it about their coach, referees, or other players on the field. Children’s views, especially young children, often reflect the views of their parents. If a parent does not like the coach or thinks a specific player is not meeting their potential, children tend to parrot these thoughts when parents discuss their children’s coach or other players on their child’s team around their child.

If you have a problem with the coach, address it with the coach. As in life, if I have a problem with someone, address it with them. If another kid on my child’s team isn’t playing to their potential, it is none of my business. It’s not my child’s. I don’t degrade the teammate in front of my child. It’s toxic to my child. It’s toxic to the team. At the end of the day, success isn’t built by tearing down the team. I don’t want my kid to be known as a toxic player or me as a toxic parent.

The focus is on my kid and his or her game. Sure, the team may suck. If I focus on what your child did well instead of what everyone else did wrong, it takes a little of the sting out of a loss. When they win, it helps me keep the focus on my child’s part in the game. I’ve grown as a parent over the years, made mistakes myself, and watched other parents make mistakes. I’m sharing some wisdom learned and given to help other parents learn how to enjoy the sideline and let their kids play.

Sports are a great environment to learn life skills from teamwork to communication. As the parent of multiple student athletes, I leverage sports as a means to teach self-analysis, goal setting, and independent thinking. I understand that failure happens. It’s part of improvement, but I balance praise with criticism. If everything my child hears from me is criticism, it’s not fun. It’s not a game. In the end, the number one point of it all is that my kid enjoys the game. It is heartbreaking, as a coach when a kid doesn’t want to play because their parents are living their lives through them.

Life doesn’t begin and end on the field of play. One day, my children will hang up their cleats and cry. Club sports will be over. They may or may not play in college. My oldest came to this point a few years ago when she called me from college. She hung up her cleats. She cried. She called me out of the love for the game. When your child finally hangs it up, do you want them crying because they hate the game, or do you want those tears to be because they are moving on from the game they love and the memories they made playing it?

Matt is a Director of Product Management for a leading mobile platform enablement company. He has traveled extensively in the United States and overseas for business and travel. His travels include India, Mexico, Europe, and Japan where he was an active blogger immediately following the Kaimashi quake. Matt enjoys spending time outdoors and capturing the world through the lens of his Nikon D90. Matt enjoys researching the political, economic, and historical influences of the places he visits in the world, and he commonly blogs about these experiences. Matt received a Bachelor in Computer Science at Mercer University, and is a noted speaker on innovation, holding over 150 patents. Matt’s remaining time is spent with his family going from soccer game to soccer game on the weekends.