It seems that every other week a post on social media touts the amazing effects of tampons as a life-saving intervention (LSI). After all, there are anecdotes from Iraq, Afghanistan, and the veteran favorite “back in my day” story.

My favorite tampon evidence comes from the always “unbiased” Snopes.com. Here we have “proof” tampons work as a LSI. Nothing says unbiased evidence like a third-party…maybe even fourth-party letter written to mom from a war zone. Snope’s story is full of unsubstantiated information, yet it is a common reference for the Tampon Truthers. Even Snopes admits this story is “Undetermined.”

Then, one can find the fringe of the Internet who also assert tampon effectiveness. Bioprepper claims tampons are “designed

to be ultra absorbent” and “can be used to plug a bullet hole until…accounts of this use date back to World War I.” However, this should all be thrown out the window of truthfulness with this: “Many items in modern society were first developed as a facet of military research – tampons being a prime example.”

Tampons have been around for many thousands of years, for, you’ll never guess—vaginal bleeding. In the age of every bit of information at your fingertips, why rely on conjecture and #fakenews as truth? Some have stated tampons were used during World War I and II. I have yet to find definitive information tampons were used as treatments for life-threatening wounds. However, Kimberly-Clark, which produces Kotex® did make and provide Cellucotton, an absorbent wadding made of wood pulp as bandages—which are bandages, not tampons. During World War 1, field nurses discovered that Cellucotton worked well as a disposable feminine napkin.

After the war, Kimberly-Clark began making sanitary napkins from 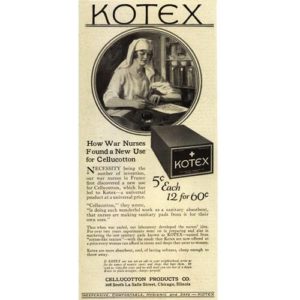 Cellucotton. It was not until 1940’s that many companies made tampons. Another tampon story says nurses made their own tampons during World War I. During World War II, “production of cotton bandages and surgical dressings for the U.S. military now took place alongside the tampon assembly lines.” The only information found was the use of tampons in the “1st century” for bullet wounds. I found that interesting  because I was not aware of firearms in the 1st Century.

Why don’t tampons work? It’s actually not that difficult. When bullets enter the body, while the entrance is small, they create a larger area inside due to the bullet’s energy. This cavitation can be large, but more devastating that the soft tissue damage from the bullet’s energy, is an arterial injury.

Massive bleeding from an artery in an extremity is a life-threating wound and also a preventable death. This is a significant issue, not only for the US military, but also the citizen of our nation. Of the 147,000 trauma deaths in 2014, 20% or 30,000 were potentially survivable. Many of these were due to bleeding from an extremity.

A tampon cannot provide the surface area or the pressure to control massive bleeding. Tampons absorb blood, not provide any hemostatic assistance. The average tampon can absorb 9 mL of blood, or about two teaspoons. This will not stop life-threatening bleeding. While a hemostatic dressing is preferred to control massive bleeding, regular gauze may be used, but it needs to be in sufficient amount. Based on square inches, a tampon has the surface area about 4 square inches.

A search of peer-reviewed medical literature will fail to provide you with any data on tampon use. This is likely, because no physician or researcher worth their $200,000 degree would waste their time studying something that is obviously inferior to tourniquets or hemostatic agents.

What about bullets cauterizing wounds? According to Fackler: “On occasion one still hears the myth that bullets reach such a high temperature in the gun barrel that they are sterilized by being fired. This was proved false by kaGarde in 1892.”

But, the other argument is, what happens when you run out of supplies. In what situation would you either preferentially pack tampons over proven medical equipment or find yourself be naked?  The latter being, clothing of any type would be superior to tampons, by the amount of surface area.

Others argue they carry tampons for females.  That’s cute, but it is not a medic responsibility on a combat mission. If you are in an aid station and you only have tampons left, you failed to plan properly. You will still be more successful using clothing over tampons. The American College of Surgeons recommends, when you do not have a hemostatic dressing, sterile dressings, or a tourniquet, use clothing to pack wound. This can be a shirt, pants, socks, preferably clean, but your clothing covered in body sweat, provides more than a tampon.

It is clear, that the tampon argument is based off passed down unverified anecdotes. The claims of “tampon truthers” are dangerous and need to be dismissed. Honestly, we probably need a study demonstrating their failure to make some headway.

Editor’s note:  This article represents the personal opinion of the author and is not necessarily representative of the views of any other party, and is not intended to serve as medical advice.