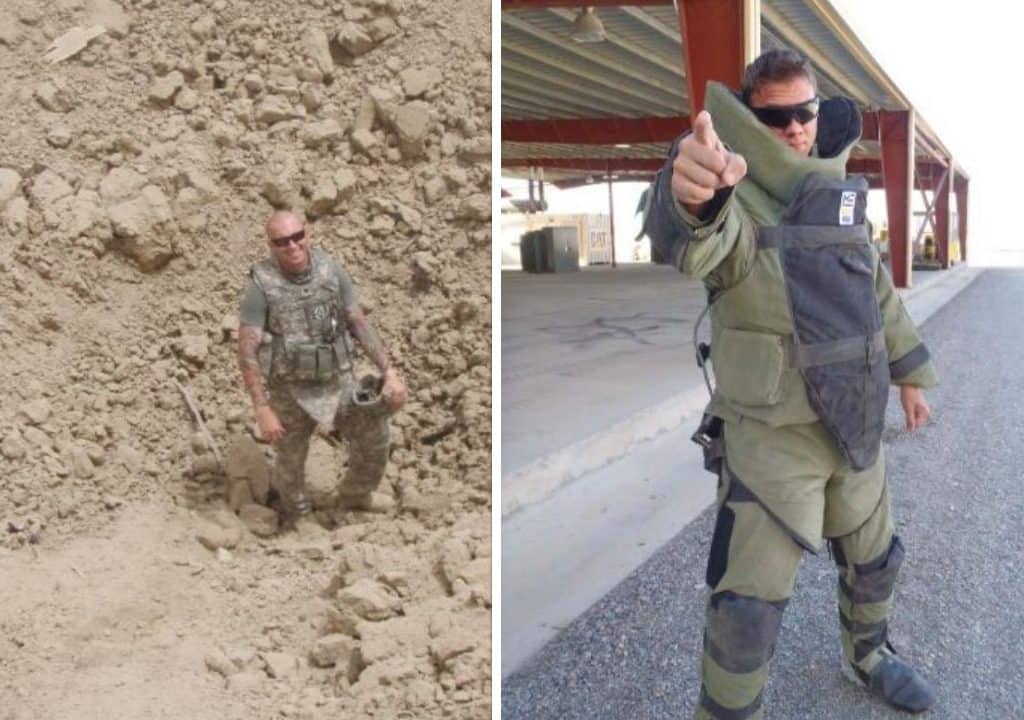 by Jeff Haugland and Sam Peterson

We are the Invictus Project. We are EOD technicians. We are survivors. We are laying everything on the line to make a real difference to veterans and others who suffer from mental illness and depression.

We are all aware of the staggering statistic that roughly 22 veterans a day commit suicide. If you’re a veteran who has seen combat, you more than likely, know a brother who has taken their life as well. Furthermore, for every successful suicide, there are 25 unsuccessful attempts. Traditional treatment methods, such as treating depression, traumatic brain injuries, and post-traumatic stress disorder with pharmaceuticals, have only contributed to the growth of the mental health epidemic we have seen in our service members. We ourselves almost became a statistic of this system.

Our story began as EOD (Explosive Ordnance Disposal) technicians. For the better part of a decade, we served in both Iraq and Afghanistan, although in different places, fulfilling the EOD mission, to protect personnel and property by mitigating the explosive threats posed by IEDs (improvised explosive devices) and UXOs (unexploded ordnance). As we now know, repeated exposure over time to concussive blast events can lead not only to Traumatic Brain Injuries (TBI), but Chronic Traumatic Encephalopathy (CTE), a degenerative brain disease found in athletes, military veterans, and others with a history of repetitive brain trauma. This trauma to our brains left us a shadow of our former selves, and upon returning home, something that should have been joyous and secure, our time in the States was marked by a cascade of unwanted, dark thoughts and ideations.

Once our mission ended, we returned home and were then left alone with our thoughts. Following the combat stress and trauma, we tried to piece together the fragmented and damaged parts of our minds, which drove us to the edge. We attempted, first, to push through this new darker state of mind, but found it was like navigating a minefield. The smallest things could set either of us off, and our families felt like they needed to walk on eggshells around us at all times.  When the minefield became too treacherous and crushing, we self-medicated with alcohol to numb the pain. But alcohol only seemed to blur the lines between pain and safety, and ultimately it magnified the feelings of self-hatred and doubt. When it was clear that alcohol was not enough to take the pain away, we took a knee and sought help through traditional, mental health methods. The level of care we received by the VA and other providers only further conditioned us into patterns of learned helplessness.  Provider after provider shoved loaded pill bottles down our throats, and those meds proceeded to numb our brains and turned us into someone we didn’t know, someone our families were unfamiliar with. We believed we were failures, failing to meet the expectations of our loved ones. Failing to meet the needs of the family mission. Making the leap from a bottle of alcohol to a prescription bottle to .45 caliber seemed like a logical next step. We no longer wanted to be a burden to the people we cared about.

While our personal struggles were unique to our individual combat experiences, the conclusion we came to was the same on two separate nights. Both of us had our pistols in our mouths ready to make all the pain disappear. But neither of us pulled those triggers.  Something kept us from ending our pain and causing more pain for our families. A simple twist of fate operating independently in each of our lives ensured that we did not become a statistic. Each of us began to lean on the brotherhood to process our experiences while researching more effective treatment options for the combat wounds that caused the most debilitating effects in our daily life. It wasn’t until a mentor of ours gathered up his demons and walked into the backyard to take his life.  He left behind his peers and his family, but also his three-year-old son. Knowing someone who had lived with so much pain that they left behind everything they loved and cherished so dearly, without even a single warning sign, became a catalyst for our life long mission – to change the way that mental health is treated in this country, not just for our veteran community, but for others who suffer from this kind of mental illness.

Together, we formed the Invictus Project to provide veterans access to more effective healthcare while collecting data from brain scans to influence policy change and future treatment protocols in the mental health sector. Invictus means “unconquerable, undefeated” in Latin. We want to live our lives in an undefeated manner.  Our four distinct treatment protocols have been shown to be far more effective in treating TBI, PTSD, and depression while empowering patients to no longer need prescriptions which only mask symptoms and fail to address the root cause of patient suffering. Our goal is to treat the cause of the symptoms, rather than the symptoms themselves.

Our treatment options include Ketamine infusion therapy, hyperbaric oxygen therapy, hormone replacement therapy, and traditional psychological therapy paired with life coaching. What sets our treatment protocols apart is our “diagnostics-first” approach to treatment. Before patients begin treatment of any kind, they will first receive a full blood workup, identifying any nutritional or hormonal deficiencies.  Then, patients get a QSPECT brain scan from our partner, Cerescan. This physical, diagnostics-first approach to mental healthcare is something that the mental healthcare industry desperately needs. Furthermore, post-treatment scans will aid in confirming the efficacy of any treatment, continually changing treatment plans for veterans.

The Invictus Project aims to empower patients through more effective treatment options so that they can take back control of their minds, and, by extension, their lives, and live the unconquered life. Veterans of the war on terror need our help, to help them find relief from their internal terrors, and we plan to be there. We want to bring back real life to these men and women. We want to help them return to their families to lead productive, full lives. Imagine a veteran community operating at full tilt within our society, no longer restrained by the darkness inside their minds. Imagine.

To learn more about The Invictus Project, check out their website here or their Facebook page here.

This first appeared in The Havok Journal on October 8, 2019.