HomeCultureTwo Rows by the Sea: When Hell on Earth Faces Heaven 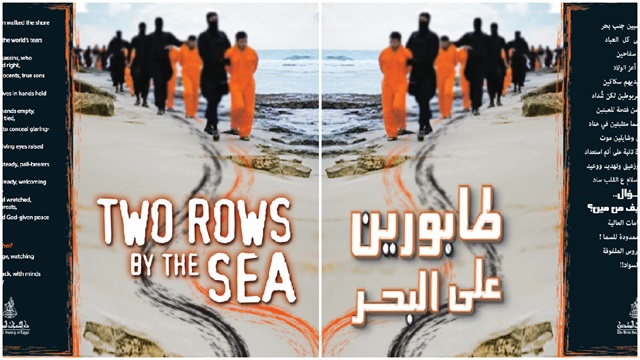 When Daesh kidnapped and beheaded 21 simple, impoverished Egyptian laborers for being — as the gruesome, professionally-produced ISIS video charges — “People of the Cross,” Pope Francis reiterated this somber reality: “They were killed simply for the fact they were Christians.”

As a woman of the cross who claims to believe in a faith in God, there are times current events distract my faith. I feel confused by my emotional responses to make sense of the horrific events splayed across media screens. Feeling angry and depressed, the testing of my faith and biblical understanding of hope and faith pales in comparison of those experiencing displacement from their homes, robbery, kidnapping, rape, sexual slavery, and beheading for refusing to deny their faith in Jesus Who offered Himself to God by submitting to an equally gruesome sacrifice — crucifixion — for mans’ sins for all time. (Hebrews 10:1-18)

To be honest, I hate that this ancient historical verse is being re-played in burning, bloody, living color today via social and politicalized media: “They were put to death by stoning; they were sawed in two; they were killed by the sword. They went about . . . destitute, persecuted and mistreated, the world was not worthy of them.” (Hebrews 11:37-38)

Never, never in my lifetime could I have predicted my eyes could view the vision John of Patmos recorded in the book of Revelation (20:4) around 96 A.D.: And I saw the souls of those who had been beheaded because of their testimony of Jesus and because of the word of God.

All the American media reports regarding the horrors of Daesh draw my focus to — the injustice of suffering, the lack of American leadership, the Republicans and Democrats’ farcical political distractions and rivalries — and away from unchanging truth and eternal hope. Heart-piercing comments by Egyptian Coptic Christians and the martyrs’ bereaved loved ones grabbed my stomach, prompting a flood of salty humility.

What Does “Love Your Enemy and Your Neighbor As Yourself” Look Like?

The brother of two Coptic martyrs — Bishoy Estafanos Kamel (25) and Samuel Estafanos Kamel (23) — Beshir Kamel offers new meaning to the biblical precept to “love your enemy and your neighbor as yourself.” (Matthew 5:43-48) Beshir, a Christian musician, ‘thanked’ the Islamic State for including the Coptic men’s declarations of faith in the videos before killing them. You heard that right. Thanked! ISIS, no less.

Raised and bred in our name-it, claim-it, blab-it, grab-it theologically screwed-up and coveting, materialistic, self-centered culture, I confess, I would have never thought to give a shout out of “thanks” to Daesh. All I could think of when appalled by these executions? Kill Daesh. The sooner, the better.

Beshir’s perspective? “ISIS gave us more than we asked when they didn’t edit out the part where they declared their faith and called upon Jesus Christ. ISIS helped us strengthen our faith.”

Within the boundaries, luxuries and freedoms of the United States, how often does death for sincere faith and love of God seem to be more historical legend than a physical reality? Beshir reflected, “Since the Roman era, Christians have been martyred and have learned to handle everything that comes our way. This only makes us stronger in our faith because the Bible told us to love our enemies and bless those who curse us.”

Displayed on my walnut buffet in a triangular wooden box sits a flag, ribbons and medals that represent my son’s sacrifice — badges of honor to my son’s service to the Army and our country. Describing the deaths of these Coptic Christians’ sacrifice as “a badge of honor to Christianity,” Beshir remarked that the bereaved families of the beheaded workers are not in despair, but are “congratulating one another”: “We are proud to have this number of people from our village who have become martyrs.”

Bishop Angaelos of the Coptic Orthodox Church in the United Kingdom responded to the brutal executions: “While it may seem illogical or incomprehensible, we also pray for those who have carried out these horrific crimes, that the value of God’s creation and human life may become more evident to them, and in this realization, that the wider effects of pain brought by this and other acts of brutality may be realized and avoided.” 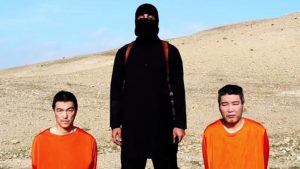 When Beshir Kamel was asked how he’d respond if confronted by an Islamic State militant, Kamel referred to his mother’s spiritual wisdom and her understanding of how God values every person’s life: “My mother, an uneducated woman in her sixties, said she would ask [the killer] to enter her house and ask God to open his eyes because he was the reason her sons entered the kingdom of heaven.” All I can say about his mom? Wow! Just wow!

Depressed by current events tapping into my heart and the pain of my son’s death, I needed Beshir’s mother’s bolt of faith-strengthening reality to remind me of Who God says He is: “As I live!” declares the Lord God, “I take no pleasure in the death of the wicked, but rather that the wicked turn from his way and live. Turn back, turn back from your evil ways!” (Ezekiel 33:11, NASB)

Before Kamel’s interview on SAT 7-ARABIC ended, Kemal was invited to pray: “Dear God, please open their eyes to be saved and to quit their ignorance and the wrong teachings they were taught.” Whether you agree with Kamel’s theology or not, I think we can all agree Daesh subscribes to wrong teachings.

When the video of the interview was posted on Facebook, it went viral, receiving over 96,000 views within hours and over 110,000 views since, plus 5000 shares. At the time of this writing, the YouTube video has garnered 150,674 views.

Viral Faith: The Victim or The Victor?

Even when ecstatic evil appears to gain ground and win, those who do evil cannot escape this timeless truth: evil bites itself in the butt. Who would have expected Daesh’s gruesome video to unite Egyptian Christians and Muslims as never before?

Even as more Egyptians were being kidnapped in Libya, The General Director of the Bible Society of Egypt wrote: “This is a very sad time in Egypt where we are in seven days of official mourning for the 21 young Christian men who were brutally slaughtered by ISIS in Libya on Sunday. The gruesome, professionally-produced video of that execution shocked the country and has united Christians and Muslims as never before.”

“Egyptians have been shocked by this news and it is the most talked about event in our country at this time. The purpose of the video was to foment sectarian strife in Egypt between Christians and Muslims. Those Islamic extremists clearly intended to provoke the 10 million Christians in Egypt to rise up violently against their Muslim neighbors.

“But the loving and caring response of Muslims all over the nation softened the blow which many Christians felt. Up till now the Christians of Egypt have responded with restraint, sorrowfully calling out to God.

“The President and dozens of political leaders personally gave their condolences to the Coptic Pope. The Prime Minister travelled to the small village where most of these men come from, sitting on the floor with their poor relatives to express his concern.”

And Beshir Kamel’s thoughts about the Egyptian Air Force bombing ISIS targets in Libya? “Only the length of the time period when we didn’t know where they were (referring to when their loved ones disappeared) justified the air strikes for us. If they had been martyred on the same day they were kidnapped, we wouldn’t have asked for any retaliation.”

Comfort and Encouragement in the Midst of Heartache

Immediately after the executions, the Bible Society’s General Director went to his office feeling “sad and depressed,” a young co-worker remarked: “I am encouraged because now I know that what we have been taught in history books about Egyptian Christians being martyred for their faith is not just history but that there are Christians today who are brave enough to face death rather than deny their Lord! When I saw these young men praying as they were being prepared for execution and then many of them shouting ‘O Lord Jesus’ as their throats were being slit, I realized that the Gospel message can still help us to hold on to the promises of God even when facing death!”

To comfort and challenge the Egyptian people, the Bible Society of Egypt produced one million pamphlets with this haunting poem along with a picture of the two lines of men walking beside the Mediterranean seashore.

Two rows of men walked the shore of the sea,

On a day when the world’s tears would run free,

One a row of assassins, who thought they did right,

The other of innocents, true sons of the light,

The other with hands empty, defenseless and tied,

One row of slits to conceal glaring-dead eyes,

The other with living eyes raised to the skies,

The other spread God-given peace and rest.

Who fears the other?

Or the row in black, with minds evil and broken?

Reflection: In a world inflamed by violence, hatred and media obsession, how do the words of Jesus challenge our beliefs? “You have heard that it was said, ‘You shall love your neighbor and hate your enemy.’ But I say to you, love your enemies and pray for those who persecute you, so that you may be sons of your Father who is in heaven; for He causes His sun to rise on the evil and the good, and sends rain on the righteous and the unrighteous. For if you love those who love you, what reward do you have? Do not even the tax collectors do the same? If you greet only your brothers, what more are you doing than others? Do not even the Gentiles do the same? Therefore you are to be perfect, as your heavenly Father is perfect. (Matthew 5:43-48, NASB)

Resources: Video of the Interview with Beshir Kamel