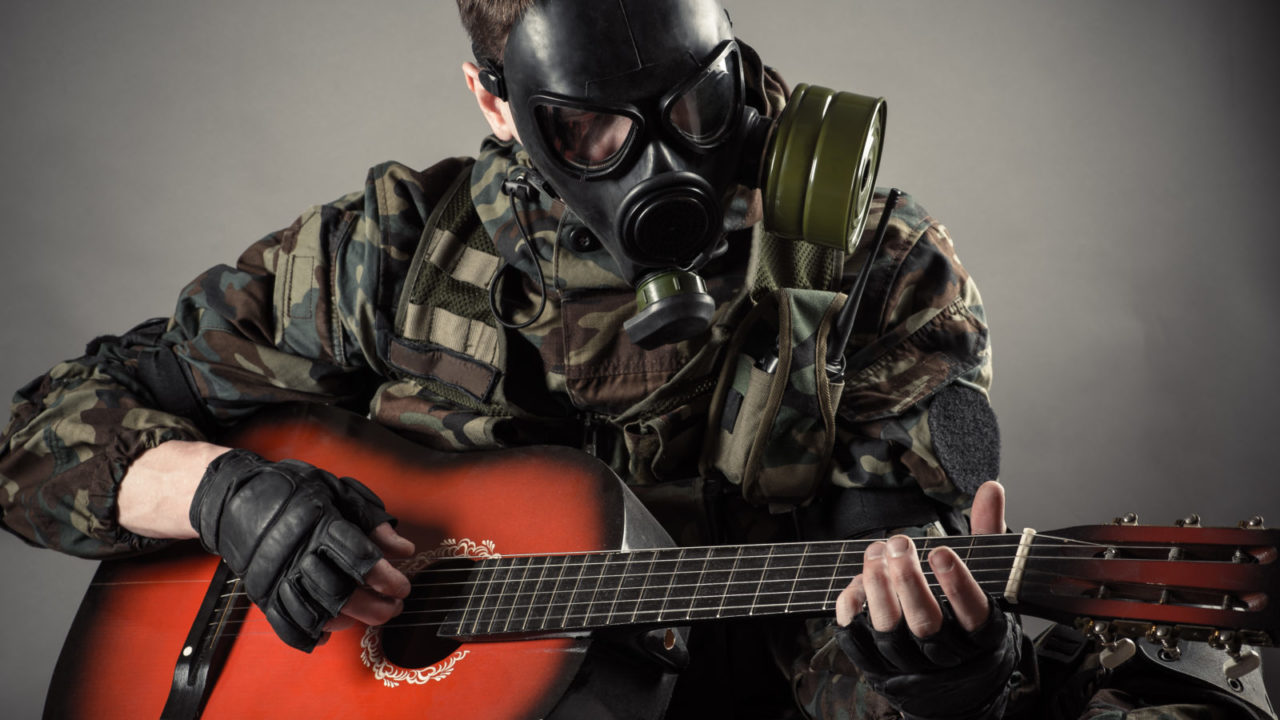 “The music in my heart I bore,
Long after it was heard no more.”
— William Wordsworth

Music is mankind’s constant. I’ve met people who don’t read books, go to the movies, surf the internet, or watch television. I’ve not yet met anyone who doesn’t listen to music. It’s a universal friend, one that’s a true companion in all of our endeavors. War is no different. Music and warfare has always been intertwined. The Greeks and Romans had their drums and horns. Scottish Highlanders had their pipes. Maori warriors had their Hakas. In modern times, music became a key part of the American war experience. When my stepfather talked of being an infantryman in Vietnam, Jefferson Airplane and The Doors were part of the descriptive language he used . . . my grandfathers served in WWII (Army and Marines) and Bing Crosby and Ella Fitzgerald were in their stories. Music, with its raw emotionality and primal attraction, goes with war.

Like previous wars, music was a huge part of OIF and OEF. But there was also something new happening. It was the very first iPOD war. No longer was music something you heard on radios or at USO shows, music was in every single pocket of every single service member. Media drives with tens of thousands of songs were pretty common and internet connections allowed people to bring even more music into the war zone. It didn’t matter if you were a support guy at the Balad super FOB or a marine in some shithole in Helmand, music found a way to get forward.

As far as me, music was my inspiration in the good times and my solace in the bad. I got my sweat on in the Clamshell at Bagram and in the Camp Spann prison gym with Jedi Mind Trick’s ‘Heavy Metal Kings’ and Mystikal’s ‘Danger’.  System of a Down’s ‘B.Y.O.B’ and House of Pain’s ‘X-Files’ were my fight songs leaving the gate. I listened to Gogol Bordello’s ‘When Universes Collide’ with an Afghan Border Cop — he loved it —and laughed my ass off when my ‘Terp danced to the Black Eyed Peas ‘My Humps’.

I teared up listening to Flogging Molly’s ‘If I Ever Leave This World Alive’ on the way back from FOB McHenry after four people were killed by an IED in a truck which I would have traveled if things had worked out just a little different. Flogging Molly’s ‘This Present State of Grace’ was my way of knowing I was home for good this past November when I returned from my last deployment. All of these songs were and still precious to me and were what I needed at those particular moments — and I don’t think the necessity of songs was unique to me.

I have a theory that every person that went forward had one song, one song that absolutely defined their entire OIF/OEF experience. When it plays, it’s the song that transports that person back to a moment that may have been years in the past but to him/her, it’s a moment with perfect clarity and immediacy. For me, that song is ‘Holy’ by Mariachi El Bronx.

It was 2010 and I was an Afghan Border Police mentor coming back from Heyratan, a border crossing point on the Afghan/Uzbekistan border. We were traveling back to Mazer E-Sharif in a convoy of four MATVs, a boring three-hour drive through barren sand and windblown landscape resembling southern Arizona. I was not normally a fan of music on convoys, needing to be alert and all, but Balkh Province was a relatively safe place and I had no issue with it on the long haul road movements.

So there we were, going south on the highway with visibility absolute crap from the blowing sand and ‘Holy’ comes on. A quarter of the way through the song, we passed through the sandstorm and crested a rise just northeast of the city. The sky was vivid blue and you could see the mountains in the distance, Mazer E-Sharif on the right and Kholm to the left. I saw wild horses galloping on the slopes of the mountains away from a pair of UH-60s heading west which spooked them.

And then it happened, like a lens flipped over the camera, the song lined up with what I saw. For the next four minutes, everything was in time to the music — my vehicle, the horses, the people, the helicopters — all of it combined into this powerful Spaghetti-western cinematic moment which I’d never experienced before. It was as if that song had been written by some semi-obscure California band whose sole purpose was to exist for those four minutes of my life. Simply, it was a perfect moment in the most sublime sense of the word.

My war is in the past, probably for good, and that’s alright by me — but a part of me will always be on that road heading south and that’s alright by me, too.  If my supposition is correct — everyone deployed had a moment like the one I experienced. They’re all probably different and loaded with meanings. My moment was perfect Zen but I imagine that for others it might have been a moment of tragedy where the pain dulls but never goes away, or maybe it was a comic moment where the laughter still echoes.

People write memoirs of their war experience and that is cool — but I have thought that if I could only collect these songs into a collective ‘War-Mix’, I’d have something truly noteworthy — a memoir built of the songs which we took forward and were our comrades in the good times and the bad. I think it would be something more emotionally gripping and powerful than any collection of words. That would be a Mix I would want to hear.