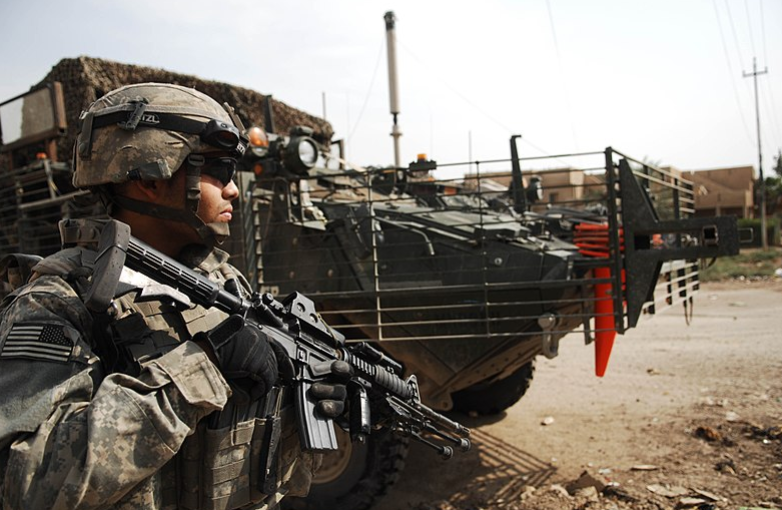 Author’s Note: We did a lot of Time Sensitive Target missions in Ramadi, Iraq prior to the 2007 Al Anbar ‘Awakening’. There was one old graveyard out in the city where we would stage our Strykers and loiter, waiting for the launch command. This is what it was like…

sprawled languidly in the oppressive heat

on the Stryker’s ramp

relaxed, our heads back against the door frame

leaning back in our kits

we sit, helmets off, radio traffic

idily crackles in the background

waiting on THE WORD

the metal ramp is littered

dip can coming out of shoulder pocket

the raunchiest stories ever

the funniest stories you ever heard

like the dip spit spilling out from our lips

“you cannot make up this shit!”

walk away from the group

to piss by the tombstones, return again

to resume staining the dust with spit

and the laughter is

more sacred than could come from a priest

but I get it because I’m fucked up too.”

and you’ll never be alone

so long as we’re here with you

on this Stryker ramp

here in this graveyard

as the WORD descends like the Hand of God

we put our MICHs on

and cram back into our metal cocoons

never to return to that moment

it briefly hangs behind us

over the sunflower seeds and dust stains

before slowly fading away

some of us move on

we make some attempts to remain in touch

but it will never be the same

some of us try to settle

into the REAL WORLD, where we try to speak

a new language unstained by tobacco

where civilians measure your cock by your

and not by your competence

or by how well you shoot or by the

weights you can throw around in the gym

or that certain assurance

in your voice as you cross that last threshold

into that yawning and hungry darkness

lit only by your tac-lights

a world where friendships are measured in

the affectations of affability

not in the burden of shared misery

Ft. Benning in the dark before the dawn

the Legs look at us

eyeing a wolfpack stealing by

you carried me, now I will carry you

to the top of this damn hill

keeping lonely midnight vigils as we

make myths out of our memories

as we relive the past

looking at the photos, raising a glass

consecrated to those passed

and failing to adjust

going back to the closest thing we can find

and slinging up our rifles

we go seeking the warrior culture

trying to find the past in the future

to the land we left where we try to find

that which we left behind back there

trying to find that moment again

but the only ones

who never truly left that moment were

the ones who joined with it forever

in an instant’s flash

in the crushing overpressure or in

a single shot in a darkened room

or the ones who dived

into a substance-abuse death spiral

or health crisis or car crash

they left the moment

only to become one with it later

in another time and place

these are the only ones forever in the moment now

we drink to it

Valhalla, Hall of the Slain

but it’s back there

in that old, dusty Ramadi graveyard

the rooftops and the airfields

back there in the places

where we bided our time in the moments

that we shared and that defined us